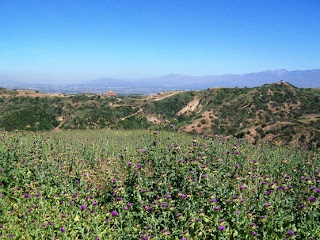 So I'm just starting out on a short morning hike, thinking about how thick the thistles are, and how they, with the Asian Pagoda in Rose Hills, and the graffiti-covered water tank above Turnbull Canyon, could make a very nice picture (can't really see those things with the picture at this scale). Then a mountain biker comes up the trail, so I step off to the side a bit.

After the biker goes by, I start heading down the trail, again. I don't get ten yards before I see and hear this guy, slithering among the dry grass and heading into the thistle: 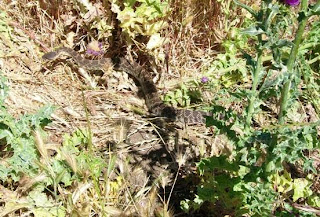 It didn't look to me like he was shaking his rattle (a short one--only five or so segments), but I heard a scary noise that might have just been wind rustling the weeds, or a scaley body sliding over dried grass. Watching his surprisingly thick body, with its distinctive green/goldish brown pattern, sliding away in the grass was a little bit creepy, particularly when I watched his little tongue, tasting the air.

Yeah, he looked kind of pissed, totally unlike my previous rattlesnake encounter. I assume the biker (who probably never saw him) came uncomfortably close to running him over, and now I was the only one he could complain to. He never took his eyes off of me (and I never took my eyes off of him!). It's a pretty amazing thing these snakes can do, but somehow he slithered away while keeping his head about six inches off the ground and looking backwards at me the whole time. You might be able to see him in this cropped picture: 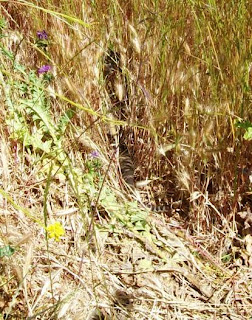 All of this happened within about fifteen minutes of my starting my walk. Quite a way to get the blood flowing. So, as you can imagine, I spent most of the rest of the day with my eyes looking on the ground about ten feet in front of me, looking for more rattlers.

The rest of today's hike was, by comparison, uneventful. I started the hike where the Skyline Trail/Schabarum Trail/Juan Bautista de Anza Trail crosses Turnbull Canyon Road, which is also where I started hike 44. However, since I wanted a short walk, I decided I would bear right when I got to the powerlines and make a loop of the Workman Ridge and Worsham Canyon trails, before returning on this short segment of the Skyline Trail. That's supposed to be 3.6 miles total, with a total elevation gain/loss of about 800 feet. 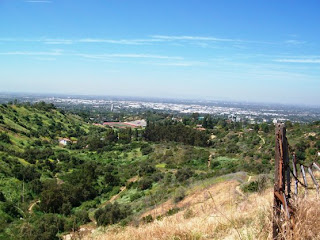 After climbing above the roadway, my path today headed south at first, towards Whitter. At one point, just before I turned into Worsham Canyon, I was overlooking the football stadium for Whittier College (the football stadium is less than obvious when the picture is reproduced at this scale). 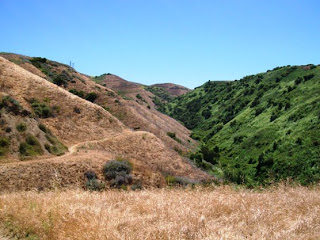 I then got to ponder the reason why the right side of Worsham Canyon was so much greener than the left side.

In addition to the thistle, lupine is still blooming on these trails, although most plants now have more seed pods than flower buds. There were also a few spots with California poppies blooming, as well as the flowers I assume to be white false dandelions. 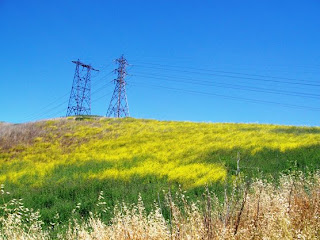 However, by far the most common flower blooming is the mustard. Here's a shot as I neared the intersection of the Worsham Canyon Trail with the Skyline Trail. I was holding the camera high to shoot over some of the dried grass that lined the road. I don't think I held the camera quite level!

This trails were relatively easy to follow, but there are no signs at any of the junctions, so having a map that indicates which ways you will be turning is very helpful.

Other stuff I saw: 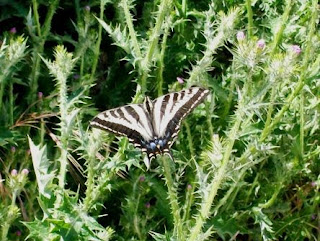 I love swallowtails. First time I really noticed them was when I was taking a short hike near Calvert Cliffs, MD. That would have been some time ago. . . . 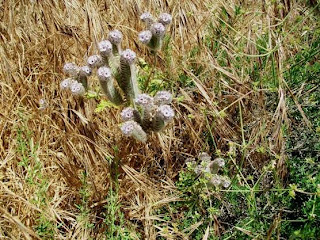 These flowers look sort of like giant caterpillars, particuarly with the little flowers at the top, that look like eyes! I think these are the same flowers I saw yesterday in Arroyo Pescadero.
Posted by SkyHiker at 6:39 PM