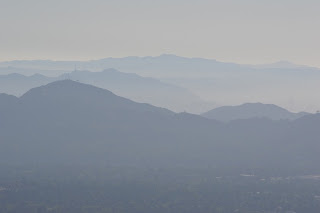 I was reading an article a few days ago about weight loss, and the importance of developing a good "default" reaction. We need to get to the point where our habitual behavior is a good one: Eating healthier foods rather than sugary foods, and exercising rather than becoming a couch potato, for example. 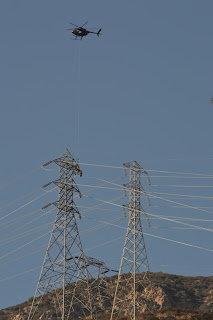 When I started this hiking blog, my default action was to go hiking. There was never a shortage of time, because I was unemployed. Even after spending hours each day looking for work, there was always time to go hiking, if not today, then tomorrow. Two, three, or even four hikes in a day became common.

However, once I started working 40 hours a week, making time for hiking got tougher. Then I upped that to 50-60 hours a week, and it got even tougher. Particularly if I tried to pick up extra work shifts, there just weren't many days for hiking. And if something came up that required my attention on a now-rare free day, things often didn't allow for a hike "tomorrow," either. 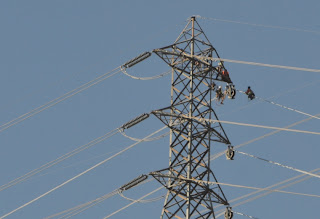 So now, I find that my default habit is no longer to hike. I don't manage to get out of the door early enough on many summer weekend mornings, and then it's too hot (I convince myself) to do any hiking. Also, sometimes it's nice (or even necessary) to use my free time for something other than hiking--say, just vacuuming the house, or sorting through the recyclables, or doing some laundry, or making a run to the pet store to buy some cat food or kitty litter.

I've got some plans on how I might get a few more hikes in during the fall than I have managed during the summer. But I don't know if I'll manage to follow through. 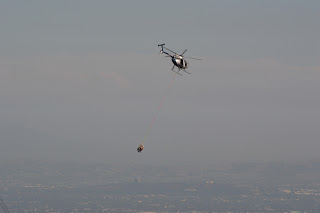 In the meantime, this week I managed but a single hike. As noted above, I waited too long, and finally postponed my hike into the later afternoon hours. I settled on a 5pm-ish start up to Henninger Flats, which I've hiked many, many times before. No need to add the description again.

But I did have some interesting encounters. First off, the area was getting buzzed by helicopters. Southern California Edison was pulling their new high tension wires taut, and men were working at heights that I would find impossible to work at. This is all part of the Tehatchapi Renewable Project that I mentioned in a number of posts last year. It seems like the transmission corridors are all exactly where I like to go hiking!

Also, just as I started off, I was asked by a young couple which way they should go to Hermit Falls. 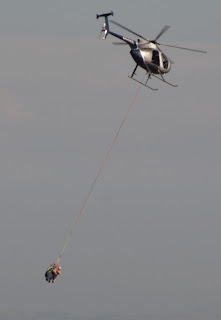 Now, I've been hiking quite a lot these past few years. But if someone asks me about a hike in a different area, it often takes me a few minutes to orient myself and fit the geography together. So as I stood here, just below Crescent Drive, near the mouth of Eaton Canyon, I had to think it over before I said something stupid. But, no, after a moment's thought, I determined what I was thinking was correct: Hermit Falls is in Big Santa Anita Canyon. To get to Hermit Falls from Eaton Canyon by foot would roughly (without checking a map) six miles up the toll road, until you intersect with Upper Winter Creek trail. Then you'd have to follow that one down probably 3 miles or 4 miles, back down to Chantry Flat. Then down another mile or mile and a half to get to Hermit. 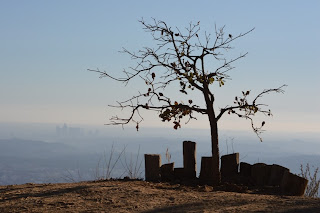 I asked them several questions, trying to figure out how they got here, and if their car was somehow over at Chantry and they had made an incredibly taxing hike in the wrong direction. Eventually, despite their uncertainty about which street they took to get to where they parked, I determined they really were just over at the Eaton Canyon Nature Center, and that they were really just interested in getting to Eaton Canyon Falls.

At any rate, I'm glad they asked, because sometimes people get lost and never ask. Then they get in real trouble.
Posted by SkyHiker at 10:15 PM No comments: 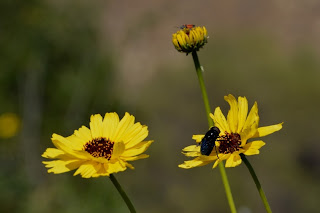 Hiked Saturday, August 17. A combinations of factors have again kept me from getting any hikes into my schedule. Today was the first time in over a month. Yesterday afternoon, for example, I had to attend a work-related party. No, that's not the worse thing to have to do. And, in fact, a convenient side effect is that it had me driving right by Ascot Hills Park. When I got back home that evening, I looked up the park and discovered it was hikeable. 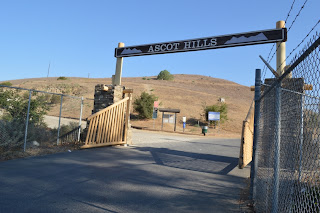 Google maps would send you from San Bernardino Freeway (I-10), north on Soto Street. After one mile, turn right (east) on Multnomah Street. The entrance will be on your left, after 4/10ths of a mile. 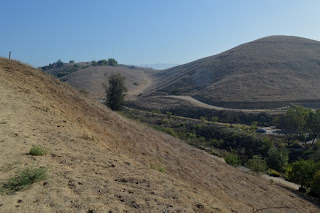 I took a slightly different route: Long Beach Freeeway (I-710) north to Valley Blvd (the end of the freeway). Left on Valley 1.4 miles to Eastern (which is the first light after Alhambra Road, just after you go over the bridge that crosses the train tracks). Right (north) on Eastern .3 miles to Druid (there's a light there). Left on Druid. After .3 miles, Druid makes a sharp turn to the left and becomes Multnomah Street. The entrance will be an additional .2 miles, on your right. 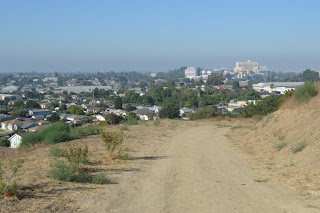 If you're coming form the north, you could also take Huntington Drive west to Eastern, then Eastern south to Druid. Either way, there's a large sign and gate at this entrance. Immediately after entering, there's a large dirt parking lot on your left. If you keep driving on the pavement, however, there's a large paved parking lot, further ahead, on your right. 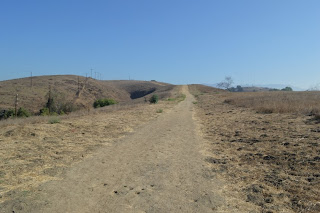 There's a chemical toilet near the dirt lot, and flush toilets and drinking fountains near the paved lot. There's also a large amphitheater, further past the flush toilets. This lower area has been reseeded with native plants, and looks very attractive. It would make a fairly nice place to do sidewalk astronomy, if the park wasn't closed from dusk 'til dawn. But I didn't get here until the end of my hike. 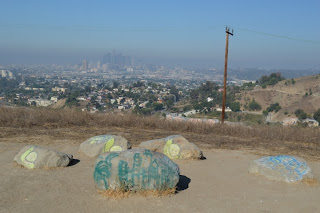 I parked in the dirt lot and went up the broad dirt road trail that headed north, to the left of the paved road. This trail made some long and easy switchbacks up a rounded hill. The hills here are all pretty rounded, by the way. There are still some fair stretches of altitude gain, but there are no really steep drop offs like you find in the Puente Hills. 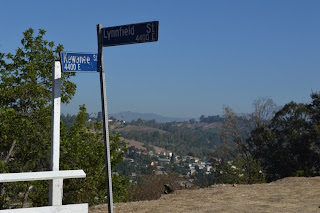 As you climb, you gain an overview of County USC Medical Center, with the downtown skyline another three miles or so to your southwest. Several tall radio antenna are seen in two large clusters within this park. 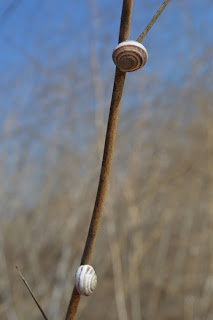 Once atop the ridge, I headed north. The San Gabriel Moutains were to my north-northwest.

After about a mile, I found myself walking with chain link fence on my right side. An LADWP reservoir was down in that holler, covered in solar panels. I did not notice, but believe there is a lateral trail that would connect the west ridge I headed in to the east ridge I returned on. There's also a trail that heads right up the bottom of the canyon. 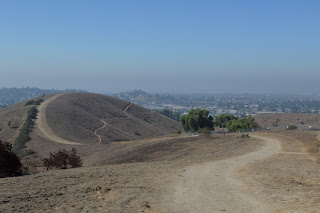 Continuing north, the dirt turned to pavement, and I eventually reached a residential area. A street sign I saw said I was at the corner of Lynfield and Kewanee. 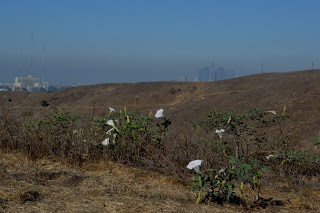 Judging by a Google maps satellite view, I'm pretty sure I headed east on Lynfield, to Bowman Blvd, then right on Bedilion St., then made a right at Okell Drive, which led me to a trail that headed mostly to the south, behind homes and climbing up a hill. 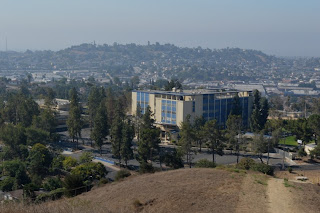 After about 700 yards, the trail turned almost directly to the west, and became a broad dirt road. it made an extended climb right on up a hill, towards a cluster of antenna. I passed dried grass stalks, with the bleached shells of dead snails stuck to those stalks.

This was the longest period of altitude gain in my hike. 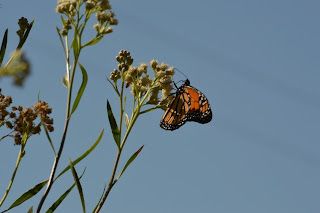 Once at the top, I stayed on the broad road as it headed along the rounded ridge, east of the parking area. Here, as elsewhere along the trail, the datura was thick, and practically the only large living plants along the trail.

As the trail approached Multnomah Street, the massive main buildings of Woodrow Wilson High School, across the street from the park, dominated the foreground.

I then crossed over towards the small developed section of the park and tried my best to get a decent picture of a Monarch butterfly and assorted other insects and birds feeding on the nectar of datura and sunflowers.

My entire walk took about one hour and twenty minutes. I'm estimating 3 miles total for the day. Easy, and a new set of trails I have not been on before.
Posted by SkyHiker at 2:51 PM No comments: