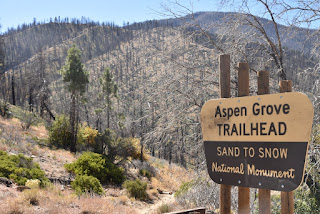 Back in June 2015, a wildfire burned "near Big Bear." In looking at the maps, I could see that "the Aspen Grove" was right in the middle of it. Yet, despite the devastation, I had to admit that I thought this might be good for the aspen: They're an early succession species. Left undisturbed, they're eventually overgrown and crowded out by conifers. Unless a fire or a snow avalanche clears the maturing forest, aspen groves can be pretty short-lived in their dominance of an area. 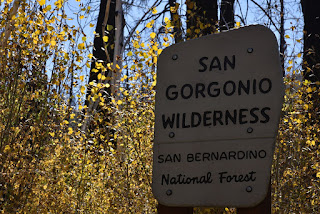 Stories emphasizing fact came just months after the fire, when ecologist visited, and journalists wrote that the aspen had, in fact, quickly begun to sprout from the underground runners. 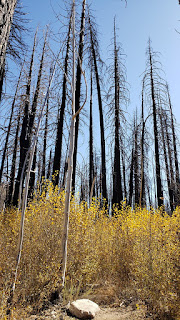 Nonetheless, as expected, an extended closure order kept the Aspen Grove and vicinity off limits to non-scientists. The Forest Service presumably wanted the forest to get a chance to grow tall enough not to be trampled by eager visitors.

Last year, I heard the closure was lifted, but that timber salvage sales kept the road that accesses the area closed. So I waited another year.

This year, I heard conflicting reports as to if the access road was reopened. I swung by the Mill Creek ranger station on Sunday, October 20, to inquire of the Aspen Grove, and was informed that it was open, and that the "regular" way in, via Forest Service Road 1N05, was open. 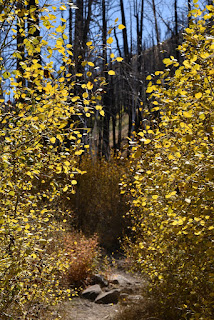 This used to be a trip I tried to make every fall.
Here's what it looked like on my last visit, in 2014.

My first visit, in 2010.
On this visit, the aspen were only a few feet tall, up to maybe 7-8 feet tall. My observation has been that leaves on smaller aspen turn later than larger aspen, which explains the color still being there so late in the season. However, many of the leaves were also brown, probably from nighttime lows dropping well below freezing, at least a few weeks back.

So, the aspen grove survived and will come back stronger than before. But it will be a decade or more before they again tower against a blue sky. For now, it's just a hint of what's to come.

Something else that changed since my last visit is that this area is now part of "Sand to Snow National Monument." It used to just be part of the San Bernardino National Forest. 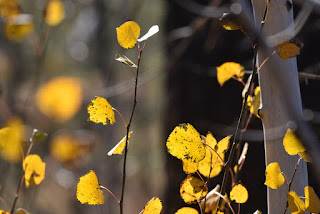 The last bit of road (1N05) to the trailhead is pretty rough, but I still managed to navigate it with my Prius. Had to go slow, though, and also had a fair amount of traffic to deal with on this narrow dirt road. I mean, not a lot of cars, but maybe three coming down and three coming up. Depending on where this happens, however, an awkward reverse may be required. But it was still much faster than if I had walked.

Walking would have added about a mile each way. However, I was somewhat pressed for time, and I had been told that the road had been "recently" graded. Still pretty tricky for a low-clearance vehicle, though.
Posted by SkyHiker at 9:55 PM No comments: 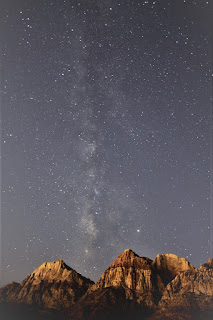 Occasionally, I've dropped in the visitor center. There's a picture they sell in there of Comet Hale-Bopp, over Red Rock. So after seeing that, I thought it would be nice to try to get my own shots of the night sky over Red Rock. But there's a problem: The main area of the park (around the 13 mile scenic drive) is almost entirely closed by dark. Listed operating hours for the scenic drive are: 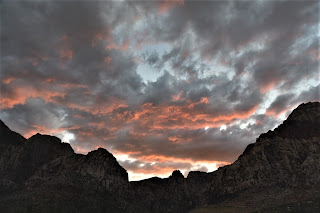 Last summer, I specifically asked a ranger if the hours meant that just the road was closed, or if you actually had to be out of the area by then (i.e., can I just park outside and walk in after hours?). The answer was that the whole area, not just the road, was closed. 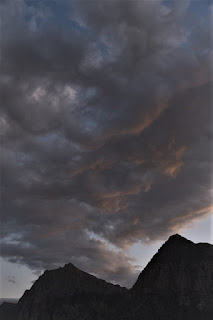 So I fiddled around, searching on the internet, and using my planetarium app to figure out when sunset would be early enough before closing hours to allow for a reasonably dark sky before I would have to drive out. And the answer was, there were two brief periods when night sky photography might be possible: In early March, after the closing time shifted to 7pm, but before the start of daylight savings time, or at the end of September, when "astronomical twilight" ended just as the road would close.

Late last March, I made a visit and got some decent pictures of the winter constellations.

In late September, I made my try at catching the setting Milky Way. The best of my catches is at the top of this post.

I also got some pretty dramatic clouds.

Even after astronomical twilight, the whole of metropolitan Clark County is right behind you when you shoot Red Rock, so the sky never really gets dark, any more. Not nearly as dark as back in the 1990s, when I also saw Hale-Bopp and Hyukatake, back in the 1990s. But the city lights do light up the red rocks nicely, and you can definitely still make out some Milky Way from Red Rock, despite the burgeoning population of the Las Vegas area over the past twenty years.

Posted by SkyHiker at 8:58 PM No comments: 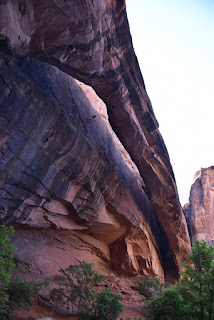 This hike was from way back in late spring, on my Capitol Reef/Arches trip. I had been in the area the previous fall, and managed to hike many of the better-known hikes: Park Avenue, Delicate Arch, the Windows Section, Landscape, Navajo, and Partition Arches, both the main spur of Island in the Sky district of Canyonlands National Park, and and Upheaval Dome.

I actually thought that was most of the Park, so I wanted to hike some areas outside of the main section of Arches. (In retrospect, the areas inside the "main area" and beyond the boundaries of Arches and Canyonlands are numerous enough that I want to get back there relatively soon. Unfortunately, I didn't have as much time to research additional areas before my May trip). 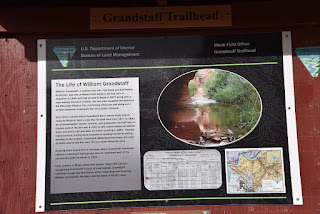 So, in my quick research effort, I thought that the area along the Colorado River might be interesting. I had driven part of that a number of years ago, and thought returning there would be fruitful. I settled on an area that the federal government is trying to repopularlize as "Grandstaff Trail." 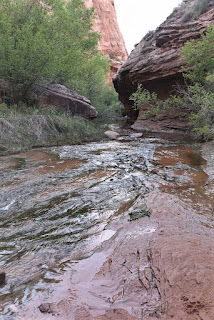 "Grandstaff" is William Grandstaff, an early African American settler in the area. Because of those facts, the Wilderness Study Area is actually known by a more common but also more offensive moniker.

The trailhead is located on UT-128, three miles east of US-191. The trail ends at a large natural bridge, "Morning Glory Bridge."

The trail begins adjacent to a small creek, which is your company for much of this hike. In places, the creek undercut sandstone. In other areas, the valley is wide. 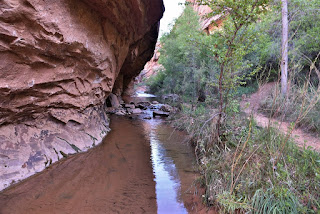 That means some areas may be shaded, but others are exposed. It can definitely get warm here, even by late spring. 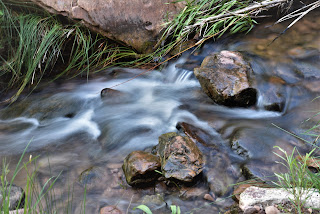 The small stream was running well. I feel like it's spring-fed, so I'm pretty sure the flow was not unusual.

The water, of course, also undercut the natural bridge (by definition). It's still set up right against a cliff, however, and so not super obvious or easily seen until you're practically there. 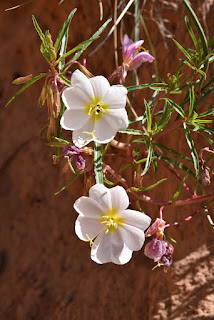 Still some wildflowers when I walked, as well. It was a nice hike. Plenty of people, but not like the trails in Arches, at least.

It's a little over four miles, out and back and about 400 feet of altitude change. So that's mostly flat, although obviously uphill, some, since the water's running towards you the entire way. Several stream crossings, too but an easy hike, at least when I went. 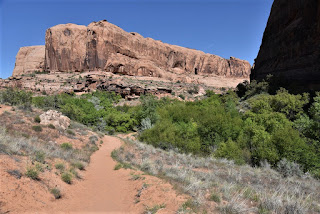 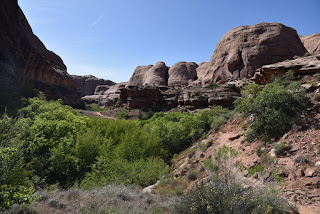 The first group included a dog. Well-trained, since I'm sure that going over a cliff is not a natural inclination for a dog. But the dog did fine. 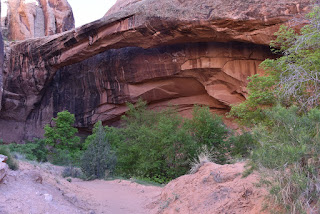 By the way, you can see the man and dog in the first shot of this post. He's also in the last four obviously. 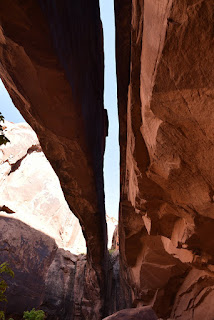 I have no firm plans, but I may try to make it back here next spring, or next fall.
In addition to the areas around Arches, I would also like to visit Fremont Indian State Park, which is sort of along the way. Not sure, though. There are several days of things to do in Arches, already. And it's a two day drive each way, so it's a six day or so trip, minimum. 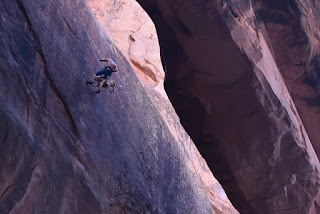 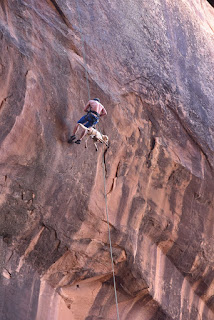 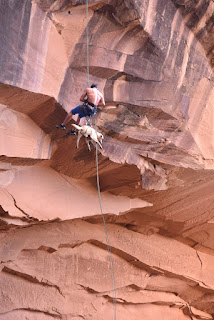 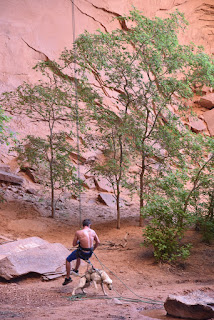