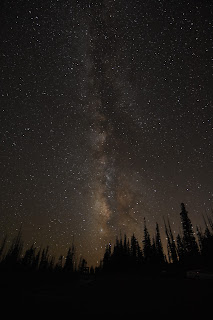 Back in the old days of film, I used to shoot ASA 1000 film with a 50mm or 35mm lens, and got some pretty fair results, including of Comet Halley, back in 1986. Nowadays, you can do something similar with a dslr, but you do need something wide. On the crop sensors that are common on lower-end dslrs (like mine, a Nikon D3400), you need to go way wider than a 35mm lens to get something spacious. So, just a few months before my solar eclipse trip, I purchased a Tokina 11-20mm f/2.8 zoom. It ran about $450, at the time. It lists for a bit more, but if you have patience and go to their "outlet" site for refurbished lenses, you can get it for less. If you just want to cover the wide-end (11-16mm), you can go even cheaper. 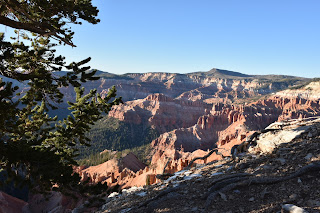 Stuck this lens and camera set up on a rather heavy, old-style pan-and-tilt tripod head tripod, and here's what I got. Up to about 30 seconds at ISO 1600, and the stars hardly trail. But the lens was nice and sharp, and the conifers gave a nice foreground to the Milky Way. I also used the tripod on a few of the other shots, including the second to last one, which, as I recall, was a 30 second exposure, well after sunset and with the place getting pretty dark. 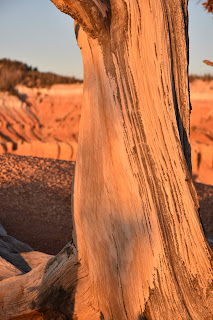 I wasn't able to go last fall for foliage, because of some major surgery. But this trip was a lot of fun. Didn't really try any new trails on this trip, but I did do some night photography. I'm pretty happy with the Tokina.

Trickiest thing is trying to get a sharp focus. In this case, on the Milky Way shot, I actually focused on the trees, when cars drove by. They were close enough to "infinity" that focusing on them gave me great depth of field, even at f/2.8. 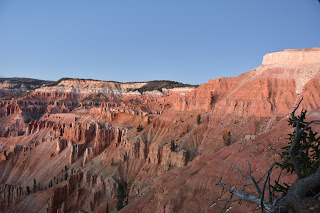 Except for the first shot, which was from the parking lot near the visitor center, the other ones were all from the short trail (maybe 2 miles, each way) to the Ramparts Overlook. If I'm able to get there earlier in the summer, I may try shooting from the Northview Overlook, if I can time it for a little moonlight to strike the amphitheater. Not sure if that'll be feasible, though. 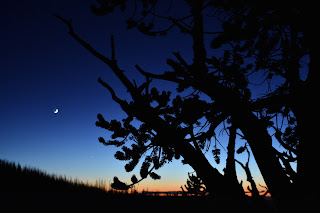 I'm also giving some thought to making some more Zion trips, trying to get some Milky Way shots there, too This one lens has got me really thinking about nightscapes. I tried some from Grand Canyon, in November I may post those, next.