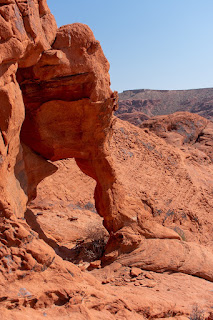 Hiked Saturday, October 3. Catching up on hikes. This was over a month ago, obviously. This was the day after my Northshore Summit hike and astronomy visit to Redstone, and the same days as, but after, the short hike to the arch I could see from Redstone, From Redstone, I continued on Northshore Drive, and on into Valley of Fire State Park. I made a short stop near Elephant Rock (no photos posted, here), then proceeded up Mouse's Tank Road (a spur that leaves the main road that passes through the park, starting at the visitor center and ending at White Domes). I ended up parking at the Fire Canyon/Silica Dome overlook.

There's a vault toilet there, and a fairly large parking area. Behind the vault toilet was a dirt road, with a gate, that headed down into the big wide open. This seemed as good a place as any to go hiking. 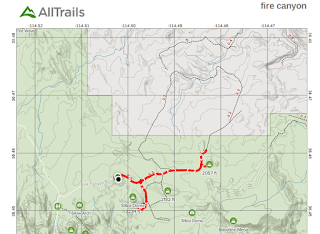 An Alltrails recording is posted here. Apparently, I walked about four miles, total. I decended downward along this broad road. It eventually reached a wash, which bisected the road. Across the erosion cut, the trail both continued more or less in the same direction (but not as obvious), and also on a hard right heading south. I went straight.

It was a pretty warm day, and I was losing altitude as I walked, so I was cognizent not to overexert myself. Took a nice leisure pace along the trail. Eventually, I approached a huge sandstone outcropping. At the south end of this outcropping was what looked like a baby elephant (not to be confused with Elephant Rock, out on the main highway through Valley of Fire). 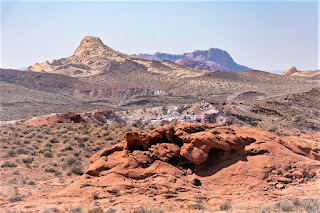 The baby elephant arch (pictured at the start of this post) was at the south end of this outcropping (see photo below). On my return trip, I detoured over to see that arch, up close. In the meantime, I continued parallel to the outcropping, where the trail began a bit of an incline. From the high point, I looked forward and backward, and saw nothing within a short distance that looked more interesting that what I was already near. So I turned around and started back. 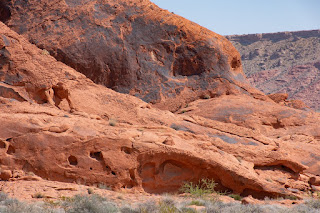 As noted above, I detoured to the arch, took many pictures, then continued retracing my steps. While off-trail, I did also do my best to either walk on rock or on sand, to avoid possible damage to desert soils.

When I got back to the trail split (about 1/3 of a mile from the trailhead), I decided to explore to the south, a bit. This area is apparently called "Silica Domes." It's mostly sandstone, with lots of crossbedding, and areas with differently-hued layers, within. There was a small arch atop one of these sandstone "dunes."

From the other side, the arch glowed a beautiful reddish hue, with lots of detailed layers. However, some idiot carved his name into the base, so no photo of that, here. 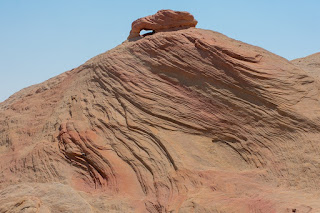 This area isn't quite as impressive as "The Wave," or even "Fire Wave," but it's the same idea: interspersed, multi-colored layers of curving sandstone. It was a good detour. 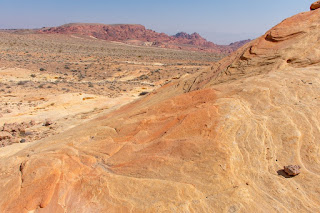 Made my way back to the main trail, then back to my car. The Alltrails "recording" says I went a little over four miles, and the net altitude change was about 200 feet from highest point to lowest point, but obviously with some up and downs, especially when walking on sandstone. 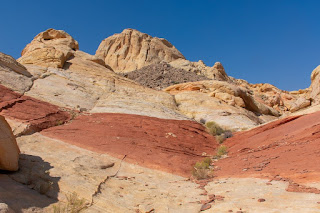 Never walked this area, before, so I enjoyed seeing some different, and dramatic landscapes.

Unlike many of the more popular areas, where cars were thick, and presumably trails were more crowded, I saw maybe one other person on this trail during my two hours or so of walking the trail and wandering the rocky outcroppings. Easy to remain socially distant. 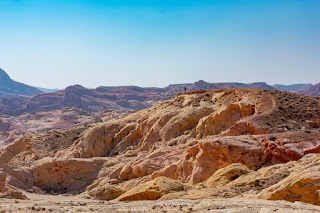 Only place I saw more people than that was near the trailhead, and even that was pretty empty.

Posted by SkyHiker at 7:17 PM No comments: