Note:  I still don't have a hang on this new editing interface.  Landscape-oriented shots are getting truncated in the blog view.  If you click on the photos, they exhibit in full. 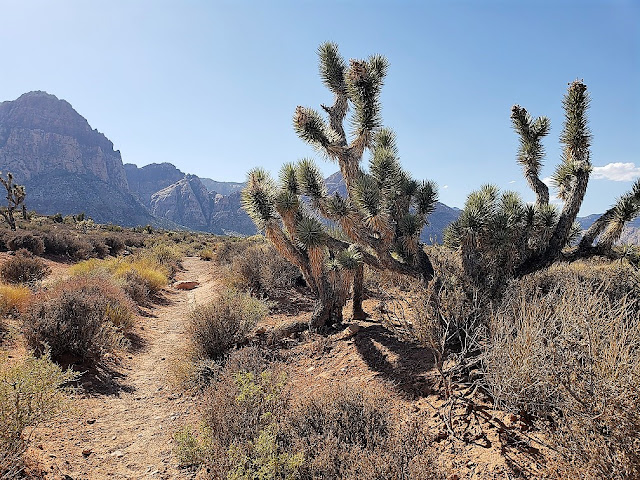 Hiked Friday, July 24.  This was last month, which seems a lot longer than that.  My original plan was just to scout the area out, take a short hike, figure the angles, then come back that night and try to get some Comet Neowise shots, above the Red Rock Escarpment.  Criminals, however, had other plans. 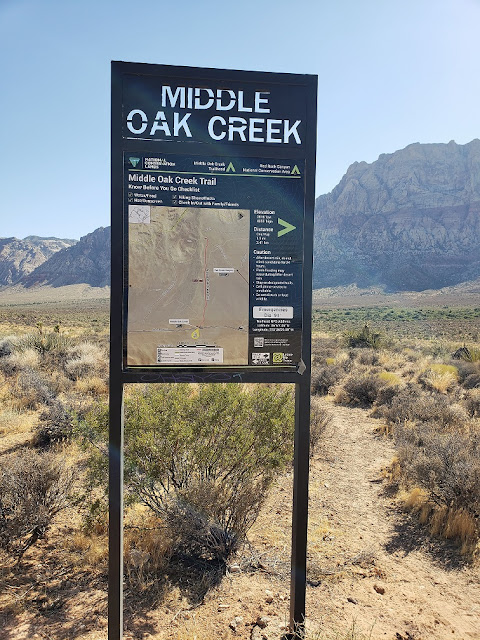 I parked at the Middle Oak Creek trailhead.  Pulled out my phone to run the planetarium software, then slowly walked along the trail.  Looking back, I noticed a dark sedan parked next to mine.  Oddly, no one came out of the car to join me on the trail.
I gave some though to taking a telephoto lens shot back at the car, to try to catch a license plate and a person, "just in case."  I've done that, on occassion.  But that seemed paranoid.  Instead, I continued, walking just about a mile and a half out, then back, just far enough to decide where some possible angles and foregrounds could be framed when I came back to photograph NEOWISE. 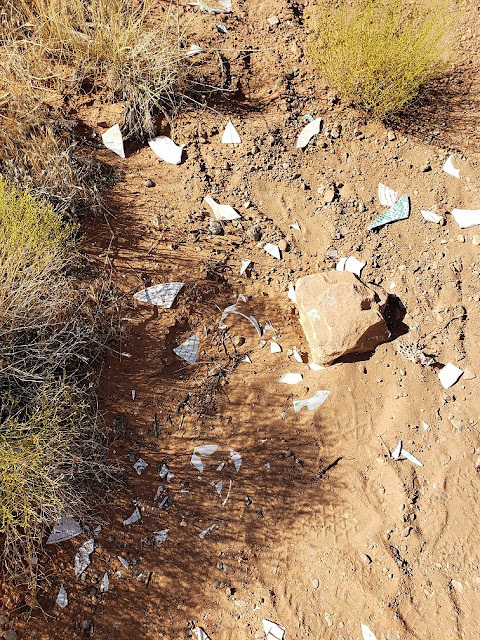 I came across some broken dishes, with writing on the plates.  I assume it's a cleansing thing.  Then, it was back to my car.
When I got there, I discovered my front passenger side window was broken.  Oddly, what they took were my two reusable grocery bags worth of "stuff."
I had just driven up from southern California, so one bag was full of snacks, but also my maintenance medication for diabetes and cholesterol.  I also had some pills to help with lactose digestion and some non-preservative eye drops.  Also in the bag, was a Swiss army knife, three wildlife calendars, and assorted other stuff.  Oh, yeah, my Pilot-Flying J, vacuum-insulated, refillable mug. But mainly, it was food.  That's my road trip bag. 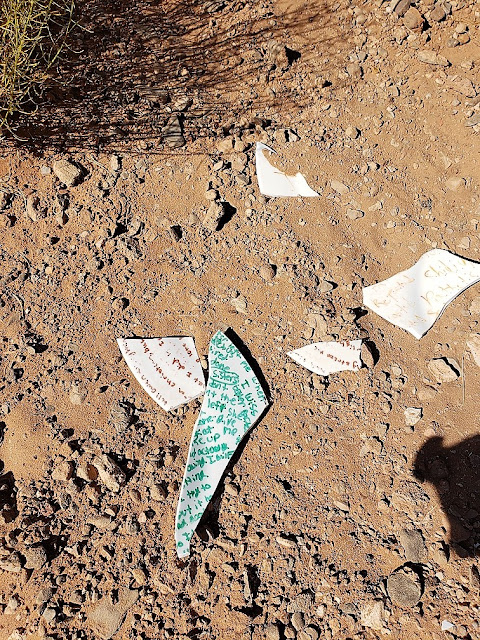 In the other bag were mostly sugar-free and low-sugar sports drink.  That's for hiking, which I hoped to do a lot of, that weekend. Except I also tossed one my ultrawide angle zoom lenses in there, since I knew I wouldn't need it for my short walk, and didn't want to carry the extra weight.  My camera body and a few other lenses were with me.
Also, they took my bifocals.  Yes, my bifocals  I assume they thought the case contained some sort of pricey sunglasses.  But, no.  Prescription bifocals.
That kind of ruined my weekend.  Spent most of the next day getting my window replaced (Charleston Auto Glass, located, perplexingly, at Sahara and Lamb.  They were cheap, and could get me fixed on that Saturday.  Other places were more expensive, and would not be able to get me fixed up until well into the next week.  So they get a free plug, here. 😀 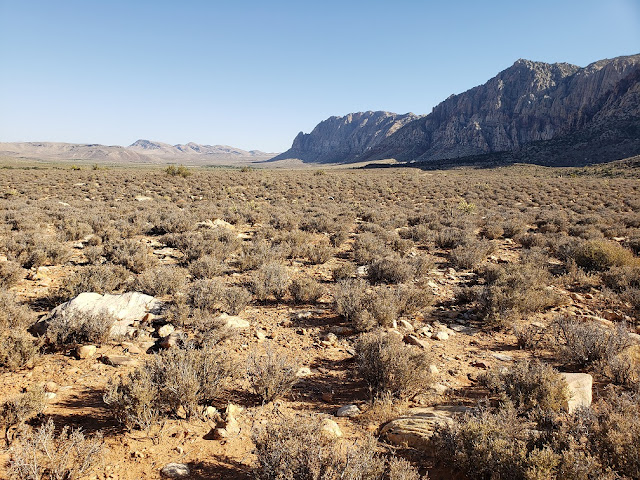 I also had to get an "emergency" supply of my maintenance medications -- Many hours at CVS and on the phone with them and my home pharmacy.
This meant no hiking for me, and no last chance to see Comet NEOWISE against a relatively dark sky and interesting foreground. With my bifocals gone, all I had were the prescription sunglasses I was wearing on my hike, which don't work, for astronomy!
Moral of the story:  Don't leave ANYTHING in your car, not even food!
Good news is, they got the guys.  They're part of a regular crew, that was also breaking into cars in Griffith Park.  I know, small world.
At any rate, eventually I'll get my camera lens back.  Probably won't get anything else.  The bifocals, especially.  Dang!
No serious harm, however, the criminals got caught, so that's something.
Posted by SkyHiker at 6:22 PM 2 comments: 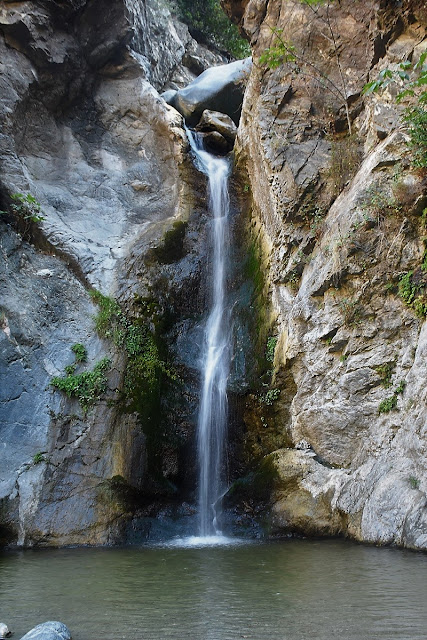 Well, I got something on Blogger, telling me they were changing the layout.  I ignored it as long as I could, but now they are mandating the new interface.  No me gusta.
I hadn't been up to Eaton Canyon in quite a while  Normally it's a winter or spring visit, when the water is high.  This year, right about when I was thinking of kicking my hiking into high gear, COVID-19 came along. Initially, when the early, "hard" lockdown came out, I figured, sure, I'll wait it out.  But it continued, and the lockdown softened.
Last week, my sister asked about hiking to Eaton Falls, so I did some investigating.  I wondered if the controlled access at the nature center also applied if you came in from Pinecrest Drive.  I had heard that Pinecrest access up to Henninger Flats was open, for example.  So I drove on up to Pinecrest Drive after work on Wednesday, August 5.  Pinecrest (and the other non-nature center access, off of Altadena Drive) were closed, with a sign saying "indefinitely." 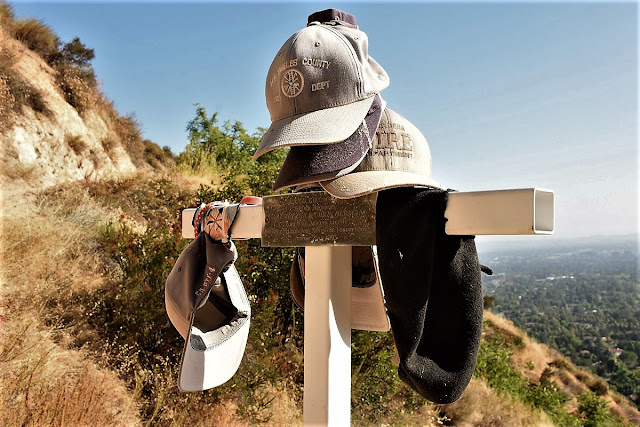 So I went with Plan B, which was the Altadena Crest Trail.  Hadn't been on this trail in a while, either.  Figured I'd come in from Tanoble Drive, and walk east, to the terminus, when the Altadena Crest Trail hits the Old Mount Wilson Toll Road.  Looks like I've done this trail before.  Well, I've probably done it more than once, but that particular trip is the first one that comes up on my blog.
This route is a hilly route, so it's a pretty good workout, as you walk the urban-forest interface.  It's 1.25 miles from the Tanoble Access to the Toll Road, so 2.5 miles roundtrip. 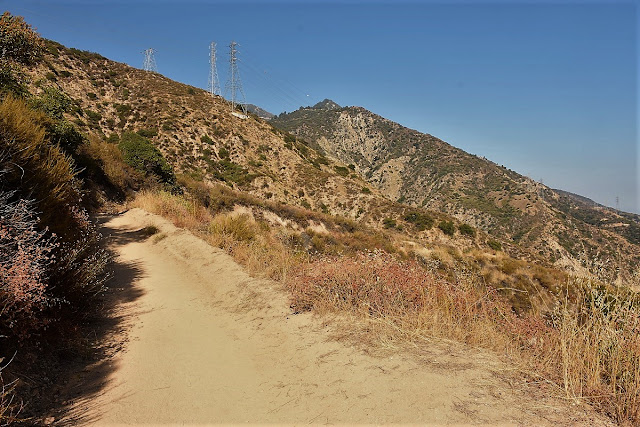 You spend the entire distance overlooking Altadena and the rest of the San Gabriel Valley.  DTLA was also visible, as were a couple of inversion layers. 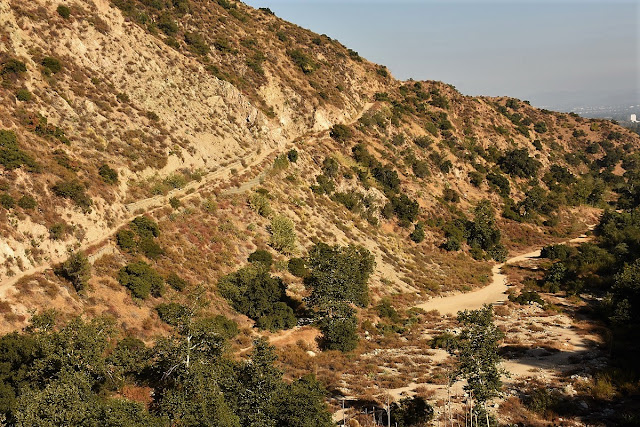 When you approach Eaton Canyon, you overlook both the lower Toll Road, that would continue up to Henninger, then on to Mount Wilson, and the County trail that goes back to the nature center.
Crossing the bridge and looping to the right and under puts you into Eaton Canyon.  Head on up the Canyon for a bit less than a mile.  The falls were fine.  And the route was blessedly empty.  Clearly, not everyone was getting there the way I got there, but apparently few were  outright breaking the rule on access from Altadena Drive, and access from the nature center was already cutoff.  Only saw about eight people on my hike, this day.
Posted by SkyHiker at 8:52 PM 2 comments: 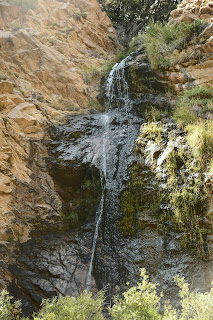 I wanted to take this hike last year, after a visit to the Iris meadow, up near Mount Pinos. I chatted with a ranger at the Chuchupate station, and asked of any moderate-length hikes she might recommend. She suggested Lilly Meadow.

Didn't make it last year. Intended to go earlier this year, to coincide with the iris bloom but didn't manage that, either. This weekend, after pretty much wasting my Saturday, I decided I would not let another day get away from me. I waited until a little afternoon to leave home, so I would not hike with the sun at its highest, and the morning "rush" of hikers would be gone. 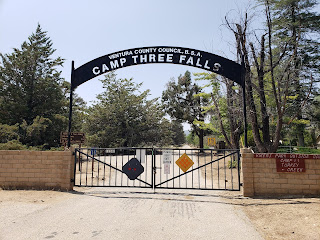 This trailhead is at the end of the public section of Boy Scout Camp Road. Exit I-5 in Lebec, Exit 205, Frazier Mountain Park Road. Turn left at the bottom of the ramp, and drive under the freeway. Continue straight at the stop sign, pass the gas station/Subway on your right, and the Pilot/Flying J truck stop and Motel 6, on your left. After 7 miles, turn left at Lockwood Valley Road. 8.2 miles later, Boy Scout Camp Road will be on your right. 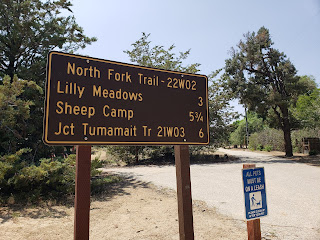 Drive to the end of the public road, and park somewhere outside the gate to the camp. Do not block the gate, or any of the side drives outside the gate. It's a pretty narrow fit between the white limit line of the road and the fences on either side. Park carefully. The passenger side person (if any) may want to get out before you park. 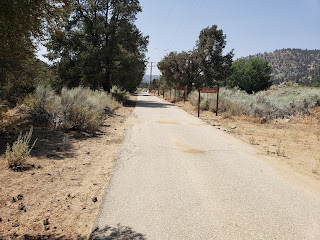 There's an opening in the fencing on the left side of the gate. Pass through, and walk straight along the road. Do not cross the ditch on the bridge. The angled trail sign ma suggest you should head left, but ignore that suggestion. Just walk on straight. About a half mile later, you'll reach the end of the pavement. 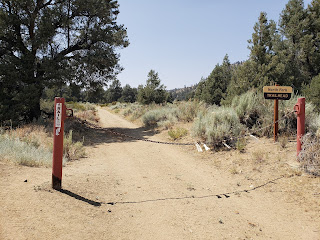 Now, you're walking on dirt. A nice, smooth, wide dirt road. Nice, if you want to socially distance. It continues as a wide dirt road for approximately two miles. Interesting mountain features on both sides. Some things look pretty volcanic. Other stuff just looks like conglomerate. Some flowers were in bloom on both sides. 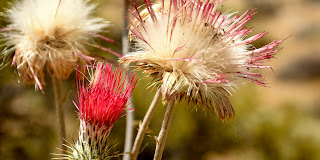 At the roughly two-mile point, there's a sign saying it's one more mile to Lilly Meadow Campground. At this point, I have to admit, I said to myself, "I've only gone two miles?"

A narrow trail (which will also prove steep, with significant drop offs) heads up and to your right. You may wish to continue up that way.

But first, continue straight for just a bit. It initially seems like your nice wide trail continues that way, anyways. Looks like people have camped up ahead there in the past, as well. As you approach the corner, you may hear water, falling. Or, if it's earlier in the season, I imagine the roar is quite loud and the running water continues in the riverbed, on your left. But, when I was hiking, no water continued pass the small diversion "dam." Water was being diverted, via a metal pipe, to a storage area down in the camp, for possible fire fighting purposes. 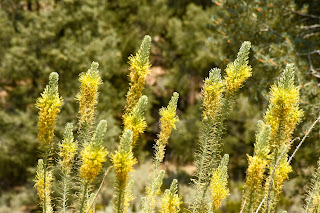 The waterfall was a pleasant surprise. I wasn't sure exactly where it would be, and how far the detour would be to see it, and it turned out to be a lot closer, taller, and with more water than I would have expected, for early August.

I took lots of pictures, then returned to the trail. 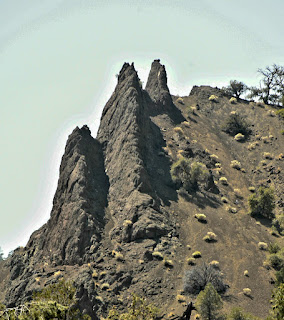 The steep and narrow trail switched backed its way upward, eventually leading you back to the creek upstream of the falls (far enough upstream, and with enough overgrowth, that I was not tempted to track my way to the top of the falls). After what seemed like a long mile, I was there: A picnic bench, a large fire ring surrounded by logs for sitting, and lots of flattish areas for camping.

On my return walk, I turned on the "record" function in the All Trails app. It measured my way back as 3.7 miles, and a descent of about 1200 feet. So just under 7.5 miles for the day, and a reasonable distance. I felt more tired than the distance should have made me feel, however, as I have not been able to do much hiking since the whole COVID thing began.
Posted by SkyHiker at 9:50 PM No comments: