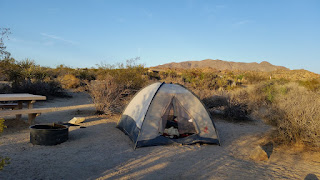 Back on May 18, I stayed at Cottonwood Campground. Took a number of night sky shots, which I posted here.

Earlier that day, I took the short hike to Mastodon Peak. Partially, I was scouting out a possible location for where to take my night shots, later that night. Gave some thought to actually coming back to the mine, but decided that was a bit far to walk in the dark. So, in practice, I just stopped near the drop, into a wash. 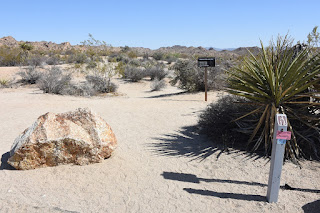 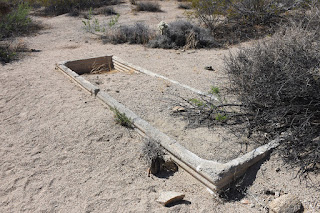 Short, mostly level start, then it drops into a wash. Some remnants of of habitation there, and on the cliffs on either side of the wash.

Downstream from here, the trail runs towards the Cottonwood Springs trailhead. Across the wash, you continue to Mastadon Peak. 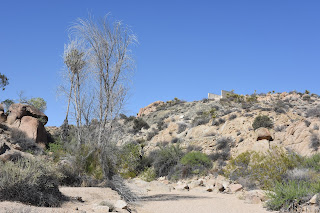 Mostly foundations, but with a few walls, still standing. One of them, that I found interesting, was where the texture of the lumber that was used to pour that foundation shows, as crisp as if it were the actual lumber you were looking at. 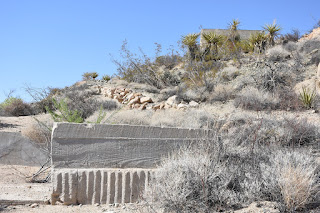 From there, you climb back up out of the wash, then run the 3/4 of a mile or so to Mastadon Peak.

Mine remnants are on the northern side of the mountain. Access to the top of the peak is reached by walking around the fractured boulders, and on up the north side of the peak. 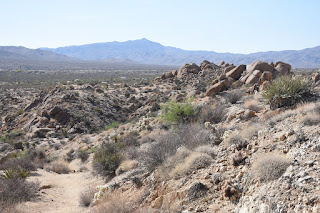 It was a moderately warm day, maybe low hundreds. As I was walking in the late afternoon, it had cooled some, by then. That made the hike pretty easy. Didn't feel the motivation to go out to Lost Palms Oasis, however, so I turned around here.

My previous hike to Lost Palms Oasis was blogged, here. 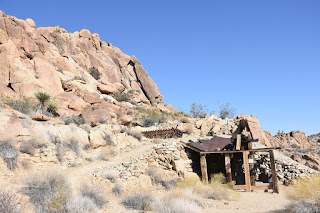 The return was quicker than expected, which tells me i was more downhill than it felt uphill on the way there. Then I just went back to the tent, kicked back, read some, and waited for dark. 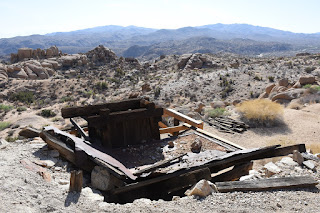 My previous hike to Mastodon Peak was blogged, here. Interestingly, I did see those yellow flowers on the thin stem this May, as well. That's the eighth photo in the linked post.

Posted by SkyHiker at 2:32 PM No comments: 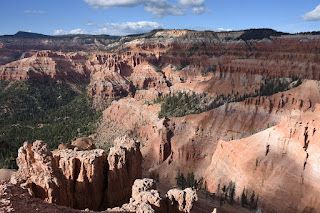 Saturday, June 14, I was up at Cedar Breaks. They have public telescope viewing at Point Supreme Visitor Center every Saturday, from more or less Memorial Day through Labor Day, with occasional special events during the week, as well. I brought my 8" Dobsonian to help show folks the stars. No night time shots, however. It got cloudy once the public portion was over.

This first shot is from the Ramparts Overlook, about two miles from the Visitor Center. The other shots are of wildflowers I passed along the way. 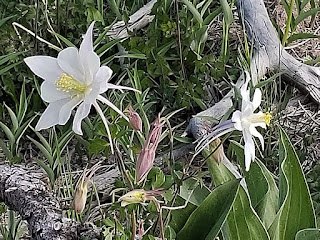 These next two shots are of Colorado Columbine. Apparently, it's Colorado's state flower. But, here they are, in Utah. ;)

The first shot lets you see their columbine-ness. 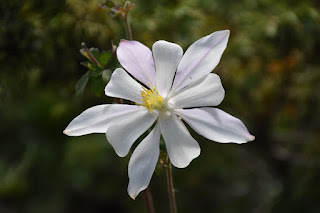 The second shot is mostly face-on, so they don't look as columbine-ish, at least not to me. They vary some in color, with some being mostly white, and some having a more purplish hue. All have the yellow stamen.

These were probably the second most common flower on this trip. I recognized them from a late summer hike, a few years ago. I thought there'd be more flowers earlier in the season, but this may have been too early. Also, I didn't have time to do the Alpine Pond trail. I'll try for that, next month. 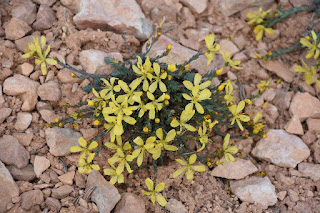 These are King flax. They were growing on the exposed, graveling ground near the end of the trail. 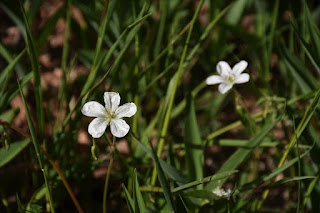 Richardson's geranium, I believe. No, I don't know these guys by sight. I had a Cedar Breaks wildflower app on my old phone. Downloaded it from the Cedar Breaks National monument website. But they don't seem to have it for Android, any more. Weird. So I need to use my old phone to look that up. They also have a number of flowers on their standard map and guide handout, and on the web page. 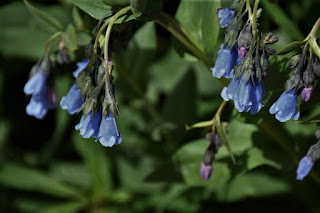 Aspen bell. By far the most common flower, but much smaller, and somewhat pale. They were thick, in places, as I think the next shot will show. 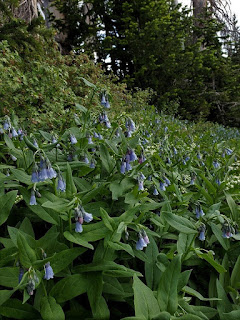 Yep, thickly, here. They look best NOT in direct sunlight, as otherwise they are just too bright, and they photograph pale. 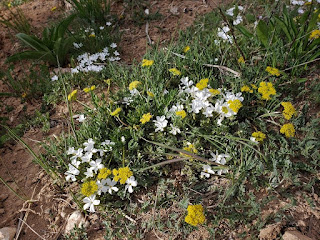 The white ones here are cushion phlox. The yellow ones are Lemmon's spring parsley. Yes, I had to look these guys up, too. 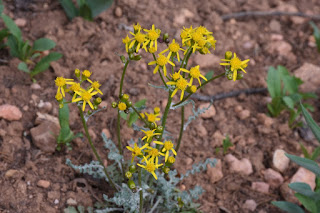 These are Basin groundsel. 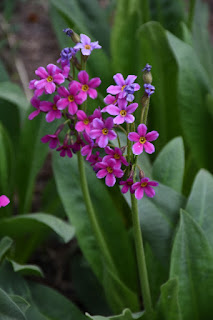 Parry's primrose. They were growing adjacent to the little creek of water that flows between Spectra Point (one mile from the trailhead) and Ramparts Overlook, and nowhere else. They look like they need a lush environment, so probably more common in marshy meadows.

Many of these flowers, I only saw a few examples, or examples in a very limited space. As mentioned, the Colorado Columbine and Aspen bells were the exception. Hope to see a more complete bloom a little later in the season.
Posted by SkyHiker at 11:43 AM No comments: Did some astronomy outreach at Sky's the Limit, a privately owned but open to the public spot of land, just north of the North Entrance to Joshua Tree National Park. That's the entrance that's just south of Twentynine Palms. They frequently do public observing events here.

Compared to the Mojave Preserve, Sky's the Limit is not very dark. But it's plenty dark compared to most places closer to Los Angeles. 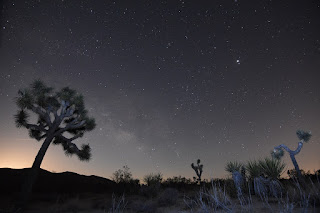 I brought my 8" dob, which my wife found at a thrift store for $200. Honestly, I think we're pretty much the best folks to have bought it. If a pure newbie bought it, they'd probably not know how to make it functional. Not that they're super-sophisticated, but it does take a little bit of experience (or reading) to know how to collimate the mirrors for effective observation. Knowing how to use a Telrad also helps, if you want to be able to point it accurately. 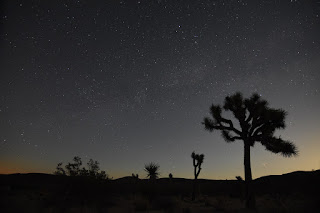 From Sky's the Limit, I showed Jupiter, Omega Centauri, Venus, the Leo Trio of galaxies, the M81/M82 pair of galaxies, M 4, Antares, M13, M57, Albireo, and Alcor and Mizar. I also saw M51, but I don't think I got anyone else to look at that. Oh, and a few people saw Saturn, very low on the horizon. 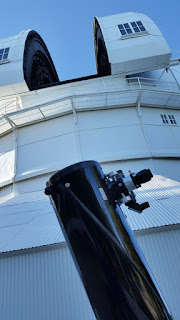 Not that many people looked through my telescope. I'd roughly estimate maybe 25 people. But those who did stop by got a really quick look at a wide range of objects. Nice thing about a Dob and Telrad is the ease with which I can swing around to these favorite objects of mine. And the folks who spoke to me seemed genuinely excited and grateful for the chance to see these objects.

This was my third outreach event with the new dob. I did an event at a school in Pasadena, and another event up at Mount Wilson. I managed to see the Leo Trio there, too. But it was definitely better at Sky's the Limit.

After my outreach, I drove into the park, wanting to get some Joshua Tree and Milky Way shots. Unfortunately, the rising moon, even before it broke the horizon, was already lighting up the sky. 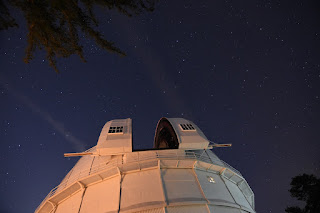 All shots were with my Nikon D3400, ISO 1600, 11-20mm Tokina lens at f/2.8. First and second shots were identical, except I painted the foreground with my little LED flashlight. Jupiter is the bright object, and Scorpius is prominent in that shot. The third shot, I moved a bit, and placed the Joshua Tree on the opposite side of the frame. It's pointed towards Cyngnus.

Last two shots were from the Mount Wilson event. That one was also a lot of fun.
Posted by SkyHiker at 10:20 PM No comments: