Mostly just a drive, although I parked the car and walked around taking pictures enough to accumulate over 10,000 steps on the drive. The first shot was at my turnaround point, with a nice view in all directions and grazing sheep in the fields around me. 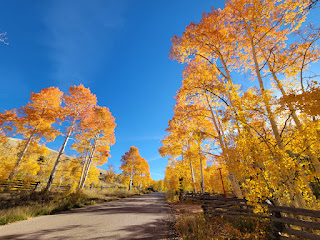 The second two were very near a spot I stopped a number of years ago. I guess it always lights up and looks great around now. Same as last time, it triggered a "Wow," and I had to stop. Someone else was shooting family shots in the same area, and I tried to stay out of their way. 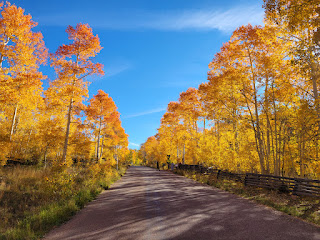 Kolob Terrace Road breaks from UT-12 while still early in the canyon, and heads along the west end of the terrace, overlooking the valley that is home to Cedar City. Spots of color stopped me on the climb, but the real show as after the road leveled out, beyond the front, and started weaving within the aspen. Small homes and cabins were scattered among some of the trees. 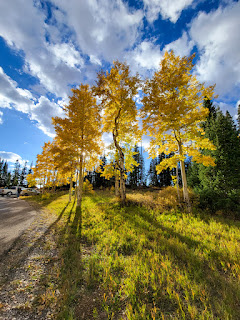 This last shot was actually taken the day before, in Cedar Breaks National Monument. It seemed a little early for fall foliage there, and there were only a few spots with color. I had initially planned to drive up to the Monument the next day, with the light to my west. But decided (correctly, it turns out) to check out Kolob Terrace Road, instead.

Click on the images for larger versions of the shots. 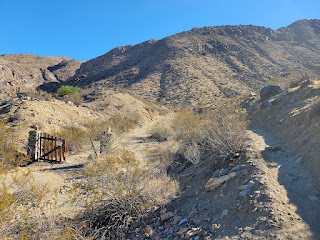 Hiked November 6 and 7, 2022. Been too long since I last posted, and I have many hikes and trips to blog. Just a little tricky with my schedule. THese hikes were from last week.

Hiked on consecutive days. On this trip, I stayed at the Travelodge in Palm Springs, a bit north of downtown. The trailheads are no more than two miles from the motel, just off of East Palm Canyon Drive (CA-11B). 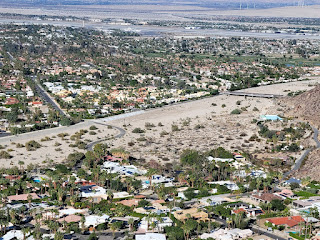 On the afternoon of the 6th, I left the motel and headed "south" on CA-111B, East Palm Canyon Drive (on this segment the road travels west to east). Turned right (south) on Araby Drive. Using google maps to reach the trailhead as indicated on alltrails.com, I was informed that I had arrived shortly after crossing the sandy wash. This was about 2/3 of a mile from CA-111B. 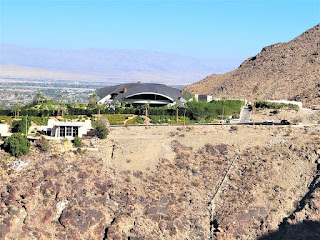 I parked off the left side of the road, and saw a trail marker on the opposite side of the road. This is the Henderson Trail. Followed those signs briefly through the sandy wash (Palm Canyon Creek), as it worked its way around a private holding, then followed the trail out of the wash and across the pavement (I believe that's Landsadale Road). 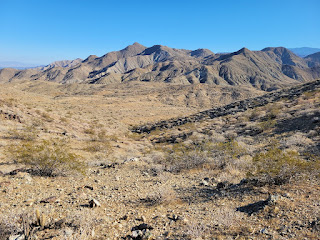 There were both occupied homes and old ruins of homes within view of the trail. After about 3/4 of a mile, a sign for the Shannon Trail split up hill. That was the way to Cahuilla Peak. Tops off at about 1522 feet, or about 1200 feet above the starting point. 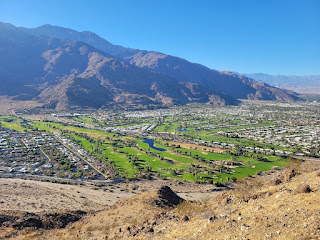 The earlier portion of the trail provides views to the north. The massive Bob Hope house is visible once you get a clear view to the east. After significant climbing, you reach a crest, and a junction with the Berns trail. A bit north east here takes to you the peak. A stack of rocks marks the summit. 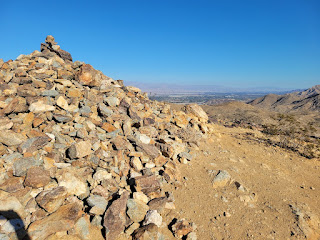 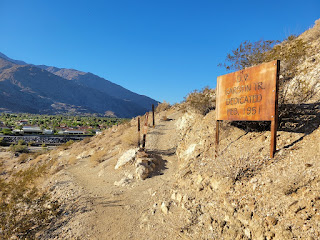 The next morning, before driving home, I decided to explore this area from the other side. I took the Araby trail, which is another way up to Cahuilla Peak. Confusingly, however, you don't take Araby Road to this trailhead. Instead, you stay on 111B about 1/3 of a mile past Araby Road. Immediatey after crossing the bridge over Palm Creek Canyon, make a right. There'll be a green road sign saying Southridge/Rim (Drive), and also have a brown sign saying "Hiking Trail." Immediately after turning right, a small parking area, large enough for 12-15 vehicles, will be on your right. 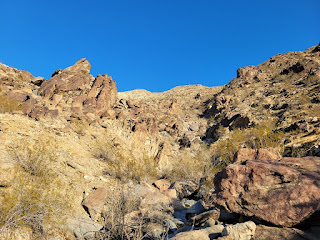 From the parking area, another "Hiking Trail" sign will send you briefly up Southridge Road, before thre trail shoots off, on the left side (if you're facing uphill) of the road. 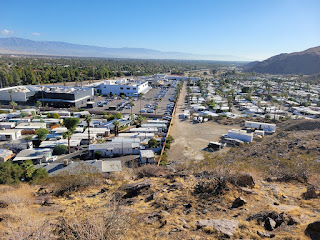 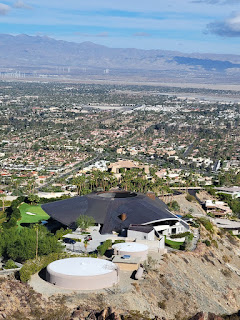 This trail runs up the canyon on the opposite side from the Bob Hope house, before eventually placing you right south of the house. From the angle, a large water tank behind the home is obvious, as is a putting green with several sand traps on the west side of the house (not visible from west, due to foliage). 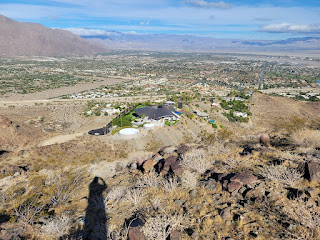 The Araby trail hits the Berns trail at the ridge, and the Berns trail heads west, to Cahuilla Peak. Perhaps slightly longer to the summit than via the Henderson, Shannon, and Berns trail, but shorter than the return via the Berns, Garstin and Henderson trails. Large portions of both trails are within the Santa Rosa and San Jacinto Mountains National Monument. 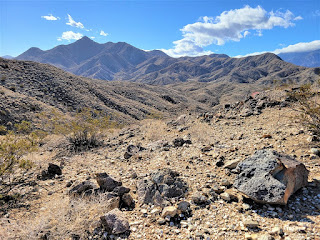 I suspect the trail is mainly used by locals, but plenty of tourists to Palm Springs are also there for the outdoor recreation. On the Sunday afternoon and Monday monrning that I hiked, there were usually other hikers or joggers within view, but the views were expansive, so it definitely didn't feel crowded. Good climb, but not very long, so not that strenuous, at least not when the weather is temperate.

Note that dogs are not permitted on the trail within the national monument boundaries.

Posted by SkyHiker at 8:30 PM No comments: