I swung by Cedar Breaks National Monument in late June, after a two-night visit to the North Rim of Grand Canyon. Haven't blogged that one yet, either. Because of the cold, snowy winter, there were still patches of snow around Cedar Breaks, and in areas of Dixie National Forest nearby. No wildflowers, except a few dandelions. 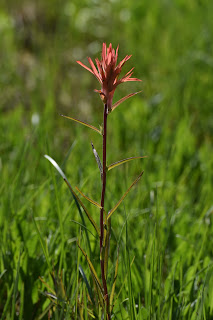 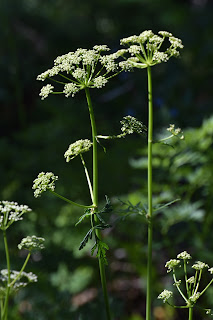 These are southern Lingusticum. Even more common, especially along forest edges. 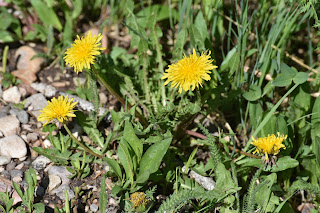 Dandelion. I assumed they were exotic invasives, but I was told they're indigenous to the area, and important to bees, because they tend to be the earliest flowers to bloom in the spring. This was consistent with what I saw last month. 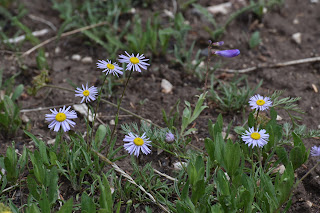 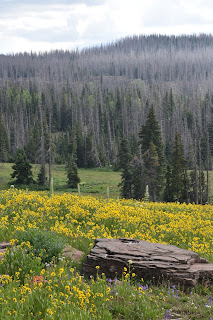 Little sunflowers, in a field, south of the trail between the Campground and Sunset Point. 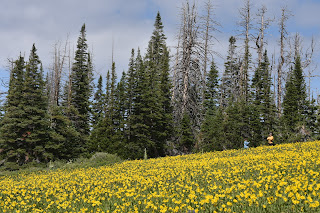 They were also thick in the meadow adjacent to Highway 143, just east of the upper Alpine Pond trail, near Chessmen Ridge Overlook. From that parking lot, it's a short backtrack along the road to get this shot. 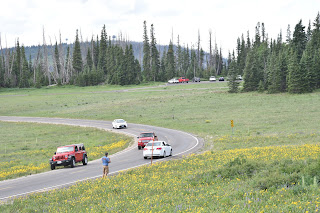 If you're an asshole who drives a Jeep, however, you can just illegally pull on to the meadow adjacent to the road, leave part of your car blocking part of the lane, walk across the road, and take your pictures. 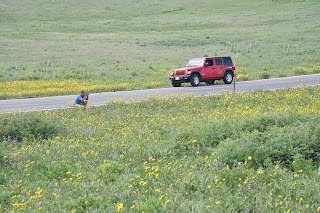 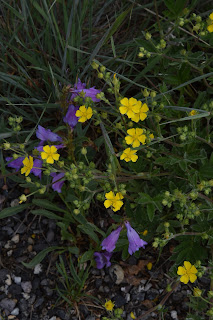 Shrubby cinuefoil is the yellow one. 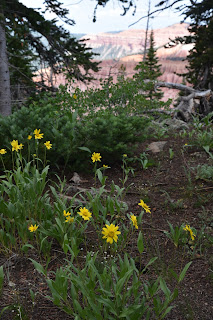 Trip turned out okay. Didn't get as much hiking as I had hoped, because of a late departure from home. But I got some nice night sky shots late Friday night, then the short bit of hiking at high altitude, to get away from the heat.

Posted by SkyHiker at 8:39 PM No comments: 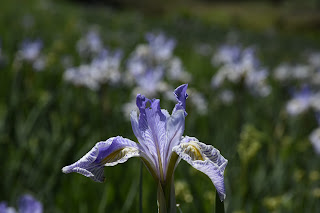 The meadow near the snow play parking area and Chula Vista campground often fills with iris in early summer, depending on the winter, spring, and early summer weather. 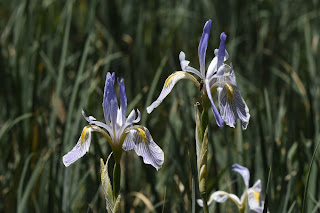 This year, because of the cold and snowy winter and spring, the iris bloomed late. I had dropped by and taken a long hike here a few weeks before Fourth of July, and the iris had barely started growing. Got a good hike out of it (over to Mt. Abel), but didn't get the iris. 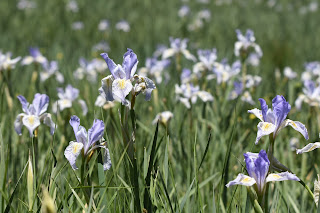 By contrast, on previous years, Fourth of July was already well past peak.

I had some ambitions of visiting the Sunday after Fourth of July (July 7), but couldn't manage that. I was pretty sure I had missed peak. But I was pleasantly surprised to find the iris in full bloom on July 12. 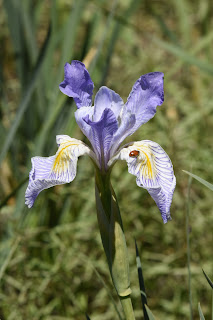 The iris were not as dense as in some previous visits, but definitely better than most.

I walked around for about fifteen minutes, then headed back to my car. I intended to drive back down to Lockwood Valley Road and look for Lily Meadow, a trail off of Boy Scout Road. But by the time I got my car back near Lockwood Valley Road, my car was telling me that my remaining range was less than fifty miles. Didn't want to make it too cut it too close, so I turned around before finding my road. 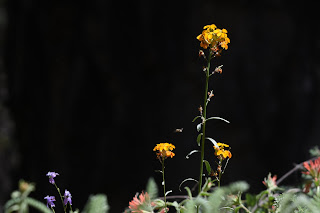 Probably should have put some gas in at the Pilot/Flying J by the off-ramp, but thought I had enough to make this trip and stop on the way back.

I also wanted to turn around because I came across a meadow with a nice blanket of sunflowers. So I stopped, walked into the field, and took some pictures. Then returned to Lebec, to put in some gas and buy some snacks. 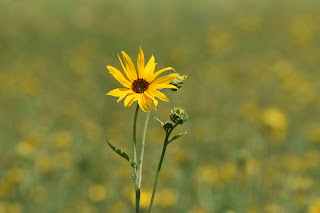 Despite the limited hiking, it was definitely not a wasted trip. I chatted with the ranger in the visitor center near Chuchupate Campground. Learned about Lily Meadow there, and bought a book on local flora.
Posted by SkyHiker at 11:09 PM No comments:

This was my most recent hike, so I obviously have many that I'll need to finish. I even have photos uploaded for a few of them, but many more to go.

My brother's a bass fisherman, and my dad likes fishing, too I used to fish, have not, for, well, probably 12-15 years. 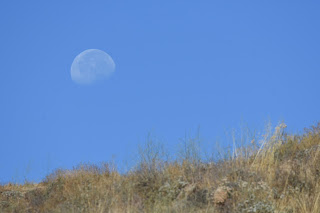 But my mom recently passed away, so I figured it's important to keep my dad busy, even if we do it in our own way. So my brother texted me on Saturday night (yeah), and asked if I wanted to go fishing with them, tomorrow. Or, alternatively, if I wanted to hike. Early start, but I said yes. 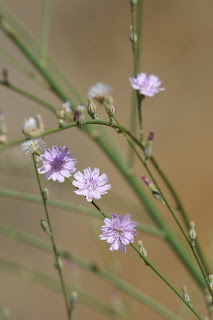 Diamond Valley Reservoir (Riverside County) is about 13 miles east of I-215. You'd probably exit at the same off-ramp as for Mount San Jacinto College, in Menifee. And, yes, like practically every other college or university in the area, I applied there, once. Even interviewed. But kind of bombed the second interview. Oh, well.

Back in March and April, the place was being overrun with people, wanting to partake of the "superbloom." But, of course, by now, that's ancient history. Very few flowers were blooming on his mid-July day. High was forecast to be in the lower 90s, which is actually pretty good for this time of year. Some wind, but not too much. Decent hiking weather, though it would still be easy to overdo it and get dehydrated. 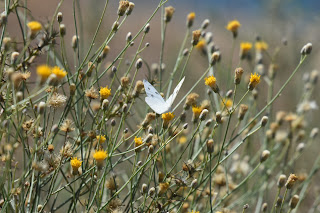 I carried a quart of Gaterade Zero and a 1/2 liter of water. That was enough for the distance I planned.

There are basically three trails at Diamond Valley Reservoir (well, they call it "lake," but, since there's a dam involved, and the water is stored by the Metropolitan Water District, it's a reservoir, by definition). Trail 1 is a short "Wildflower trail," which was closed on the day I visited, although there weren't any wildflowers there. Trail 2 is the North Hills Trail, which starts down outside the park's gate, near Domenigoni Parkway. It's about six miles long, and runs the length of the hills, north of the reservoir. Trail 3 is the Lakeview Trail, and runs the circumference of the reservoir: 21.8 miles. It's open to foot and bike traffic. You'd have to walk a short portion of this trail to access the Wildflower trail. 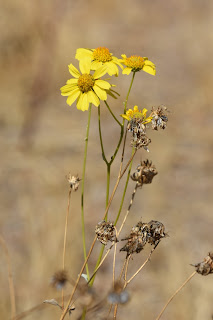 I get the impression that most foot traffic heads in a counter-clockwise direction, west, from the marina. Going that way, there are four portapotties and several pop-up shade tents along the first four miles of trail. There are also convenient signposts that have the mileage each way to get back to the marina. 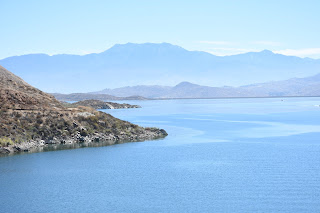 The lake was actually pretty empty. Or, more precisely, it's such a huge lake that even with dozens of boats out there, you'd typically only hear a handful at a time. 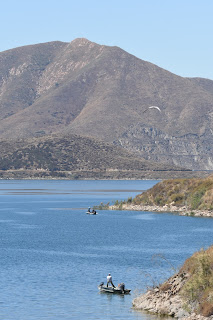 It being summer, the bloom was over, and the wildlife was mostly probably in the shade. I saw a very few lizards, a very few butterflies (just cabbage whites, I think, and some waterfowl. The terns were active, and I saw a few catching small fish out of the lake.

Big water, and pretty scenic, if otherwise dry. Mount San Jacinto, far off to the northeast. Rolling hills all around. 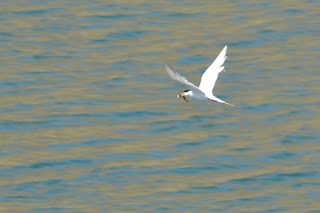 Not sure how I would have enjoyed the superbloom, had I come, then. I'm not a big fan of crowds, and watching people trampling flowers to get selfies can be annoying. Would have been pretty, though. 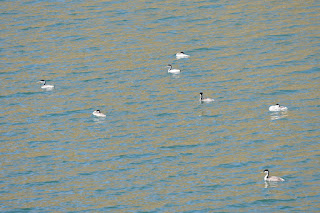 Also, even avoiding the Wildflower trail, there's probably more wildlife viewing opportunities when it's not as hot, and definitely more comfortable. I may try to join them if they come fishing next spring, if there's a bloom, on.