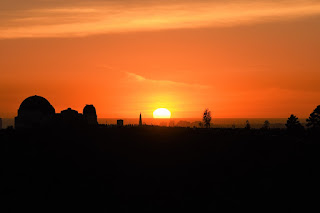 Griffith Park has been my only consistent walking area, just because, on many weeknights, I head up there early (to beat the traffic), then have hours to kill before my shift begins. 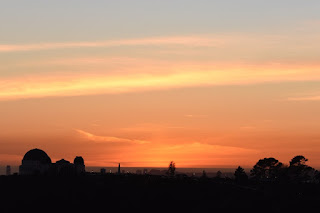 As the winter solstice approached, I thought it would be fun to try to catch the sun, setting near the Observatory. That meant finding a spot to the east. 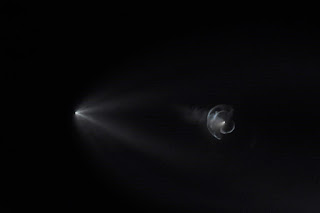 All of these shots were from one of two hikes I took between the Observatory and Glendale Peak. According to the "Tom LaBonge" map, Glendale Peak is 1,184 feet tall. That's 400-500 feet shorter than the "top" peaks on Griffith Park, like Mount Hollywood (1625 ft), Mount Bell (182), Mt. Chapel (1614) or Mt. Lee (1680), so Glendale Peak doesn't exactly stand out from the crowd. In fact, standing at the Observatory, it doesn't look like much of a peak, at all. 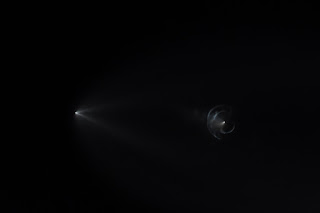 Nonetheless, it is about fifty feet higher than the Observatory grounds, so, from Glendale Peak, you are looking slightly over the spot. Your altitude becomes somewhat apparently when you notice you can see the ocean over the Observatory lawn. 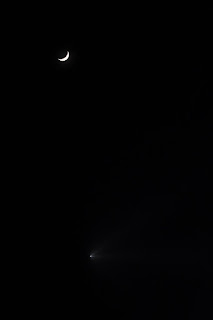 There are multiple routes between the Observatory and Glendale Peak, but none of them are direct. One way takes you up the Charlie Turner Trail, east, below Mount Hollywood, past Dante's View, then along teh East Ridge (Hogback) Trail. The spur to Glendale Peak is right after crossing the small metal bridge.

Route two from the Observatory would be down the Boy Scout Trail, across Vermont Canyon Road, along Commonwealth Canyon Drive, up to the Riverside Trail, then up around to Glendale Peak. 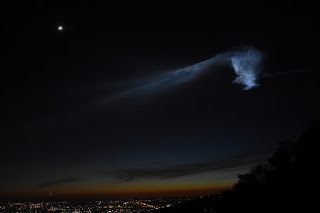 I'm pretty sure the latter route is shorter and has less altitude change, yet either seems pretty long when you're walking. It shouldn't seem that long, since I used to walk further than that all the time, but just not much of that, recently. Wild guess would be about two miles each way via the latter route, and 2.5 miles each way via the former. A loop makes it about 4.5 miles. 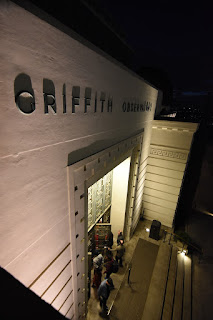 My first hike this loop was the Sunday before the Solstice. Wasn't sure if the spot would work, but it pretty much did. The sun set just a bit north of the Astronomers Monument, on the lawn of Griffith Observatory. I returned again the Friday after (the day after) the Solstice. The setting location must have differed, but not appreciably.

On that second trip, I knew a SpaceX launch was scheduled for shortly after sunset. My plan was to try to get back to the Hollywood Sign viewpoint on the Charlie Turner Trail. Figured I could set my small tripod on the seating area there, and get a somewhat more stabilized camera for my shots. But I didn't quite make it back there by the time I saw the rocket, steaming off into space. So I stopped, attached my long telephoto, and took some shots. I also took some with my wide angle. The launch was visible for several minutes from most of southern California, so I had time to make those switches. 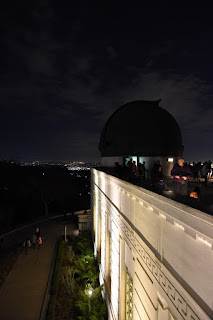 The first two satellite photos here, by the way, are the same shot. The first one was just processed to show dimmer detail. All of the other shots are just .jpegs of the shots, as my Nikon D3400 recorded them. Obviously, I toggle the exposure settings around quite a bit during things like this. But, especially because I had no tripod, I knew I wanted to take relatively short exposures, to minimize camera shake. Under the circumstances, I was pretty happy with the result.

With the exception of the last shot in this post, all of the telephoto shots were taken with a Sigma 100-400mm f/5-6.3 telephoto. It's a little heavy, even with a tripod. Still haven't decided if the extra weight is worth the extra 100mm of reach, as, it turns out, the difference between 300mm and 400mm doesn't seem that significant, through the viewfinder. But I haven't had a chance to try this on distant birds, so we'll see. 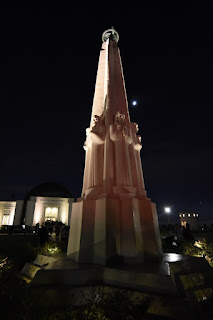 The superwide angle shots are with my Tokina 11-20mm f/2.8. Wanted speed, shooting in the dark. Still love this lens. 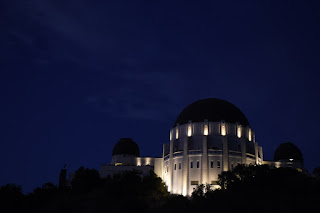 The last shot was with my Nikon 18-140mm f/3.5-5.6. That's pretty slow, but in daylight, it covers the most frequently needed ranges, except when I want to go macro, or long telephoto. Got that one as a Nikon refurbished lens (the Sigma was also a refurb, and, had I been patient, I could have gotten the Tokina from their refurbished "outlet" website, too). Obviously, these lenses are still not "cheap," but they're a lot cheaper as factory refurbished than they would be as new. Something for photo bugs to consider to stretch your budget.
Posted by SkyHiker at 3:27 PM 2 comments: 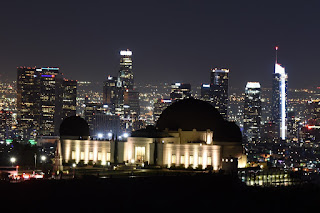 Of course, now that we're coming up on the Winter solstice, sunset is now a little after 4:30pm. Since my shifts at the Observatory don't start until 6:15pm, I've got plenty of actual darkness to wander up to the big turn in the Charlie Turner trail and get some nice nighttime views of the Observatory, with the DTLA skyline as a backdrop. 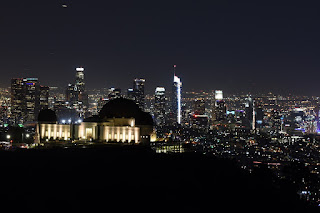 I'd estimate it's only about 1/2 to maybe 3/4 of a mile from the trailhead to the turn. Add another 1/3 of a mile or so if you're walking from the building, which, of course, I am. 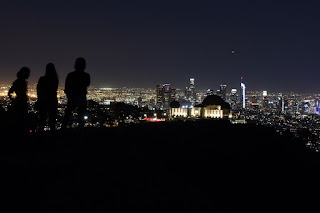 At the turn, there are a set of polished granite-covered seats. It's designed as an overlook towards the Hollywood sign. It's also a nice, flat place to set up my backpacking tripod.

When you zoom in on the Observatory, you're looking just past a drop-off, and generally, there's no one to obscure the view. However, widen the view, and, yeah, there are usually people (often, with their own tripods set up). That just gives you more framing alternatives! 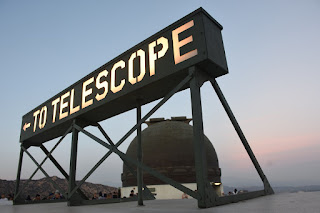 One problem I have is that if I zoom in on the Observatory, I get internal reflections from bright lights around the Observatory, showing up as ghost images in my shot. I need to frame wider, then crop, to get a decent close-up without the ghost images.
Posted by SkyHiker at 12:00 PM No comments: 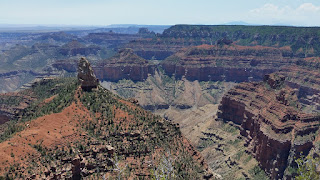 These were taken the Sunday into the Grand Canyon Star Party (North Rim), in June 2017. I set up my telescopes and did astronomy outreach on the first Saturday and Sunday of the star party, then headed back home the next day. 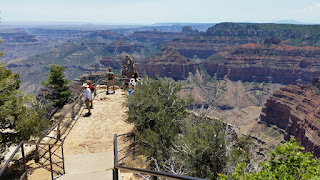 The entire star party goes on for eight days, over two weekends (Saturday through the Saturday). This year's ran the nights of June 17 through the 24th.

This was my second year volunteering at the North Rim. As mentioned in other posts, I enjoyed this party, as I do, most public outreach events in national parks. You generally get a better educated and appreciative crowd at these National Park events, although, I must admit, this may be changing. In particular, the spread of social media means that, especially for events near large urban centers (like Joshua Tree, which I may post of, later), you often get folks who don't really know what they're going to, but do know that it's "a happening," and they want to come. 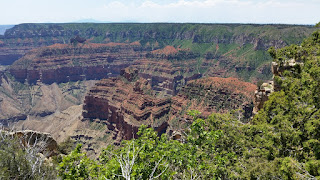 Meanwhile, for the volunteer, part of the fun (besides looking at faint fuzzies from a dark sky location, and sharing that with the public) is being able to explore a bit of the park in the daylight hours. 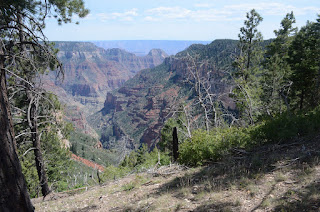 The Grand Canyon is such a long drive from southern California that the time exploring is probably less than the time driving. I definitely didn't have time to see even the more accessible trails, last year. So I visited two new overlook areas, this year: Cape Royal, and Point Imperial. I posted about Cape Royal previously. The first two shots of this post, meanwhile, were from Point Imperial. 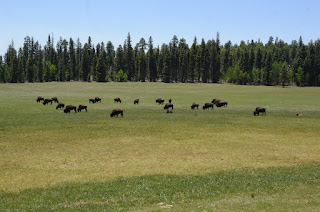 Meanwhile, the third shot was from a burro ride along the rim and the last two were from the road to the north of the Rim, on my drive back home. Lots of bison live in this area. On occasion, they graze in numbers up to a few dozen. 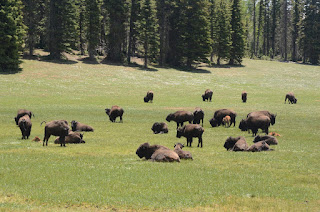 I saw both bison and deer on both trips to the North Rim But this group was particularly photogenic.

Posted by SkyHiker at 2:15 PM No comments: