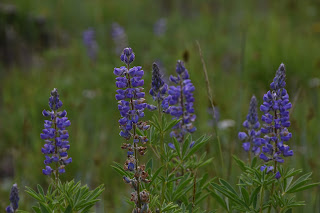 Just about one month since I hiked here. This was part two of a two night trip into southern Utah. On the first afternoon, I arrived in Zion and just hung around the Watchman Campground and hiked the Watchman trail, twice. The next day, I headed up to Cedar Breaks, with the intent of doing some hiking, then volunteering for the star party (they have one every Saturday night, in the summer). 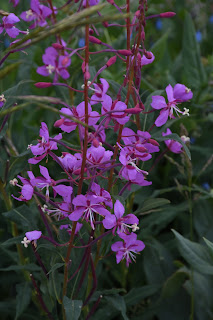 Despite my any visits here, previously, I had never actually camped at Cedar Breaks. I always just stayed in a motel down in Cedar City, an easy half-hour drive down the mountain. But because I was an official NPS volunteer, they were willing to put me up in a campsite.

Had to do some hiking before checking in, though, since I arrived before check-in time. I decided to hike the Alpine Pond trail, which I had done before, but not on my trip, the previous month. It may not be until the Colorado Columbines over the red amphitheater rocks that any of the shots are actually from the Alpine Loop trail. Also, the sunflower field was from a large meadow that's east of the trail. I walked back from the Alpine Pond trailhead to the Point Supreme Trailhead via the road, because I wanted to be on the correct side (for lighting purposes) for those sunflowers. 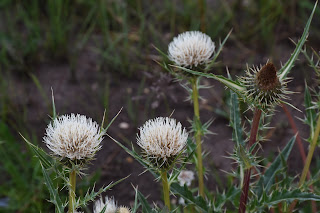 My photos were organized by flower type, however, so the first few shots were not from that hike, but from one of the others.

I went through my shots and organized by flower type, so the order is lost and I can't tell you for sure on which of the three short trails I walked that I saw each of these flowers. The exception would be the large meadow of sunflowers, which was just west of the main road that passes through the monument. 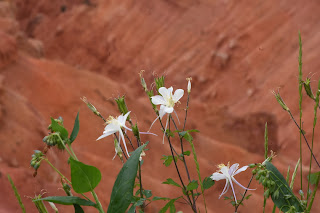 The flowers were obviously blooming in greater number and variety than the previous month, was is to be expected. The week was there this time was supposed to be their "Wildflower Festival," which presumably is scheduled for just such a consideration (though, admittedly, I did not hike the Alpine Loop trail, last time. Still, it seemed like the flower variety was pretty limited on the parts I could see, including the large meadow. The most prominent flower that time was the Aspen bell, which does not stand out like the sunflowers, to be sure. 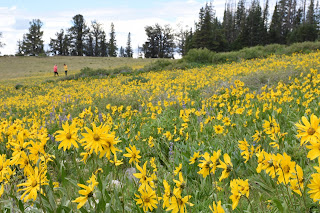 After my hike, I was able to check in. I forget the site number, but it overlooked another large meadow, to its east.

It's a nice little campground, though it looks like some construction is underway. I didn't ask anyone what it was about.

The sites are sufficiently spaced, though I think there's only one flush toilet and shower per gender. It was pretty empty the night I was there, so that wasn't an issue. If the place is fully booked, that might be an issue.

A nice engineered feature of the campsites here is that you pitch your tent on worn river pebbles, so any water that does fall on your tent drains down rather than potentially running between your tent and the ground, so that helps keep you dry if it rains, which it did, heavily, while I was there. 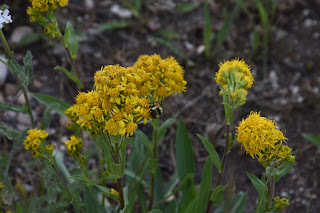 The regular nightly fee of $24 is up a few dollars from last year, and relatively expensive for a small park. On the other hand, it includes a shower, which could otherwise cost more than a few dollars each, if you had to go elsewhere for a shower. That was a lifesaver for me, considering how hot and humid the previously night down in Zion had been. 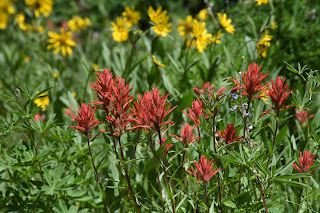 Maybe an hour or so after getting my tent pitch, some pretty serious rain came down. I stayed completely dry, however.

I had bought a new tent about a month previous, since I had ambitions for perhaps a few more camping trips this year than last year, and my old tent, purchased from Sears, in the late 1980s, was showing its age. I had serious doubts as to how it would hold up in the rain. 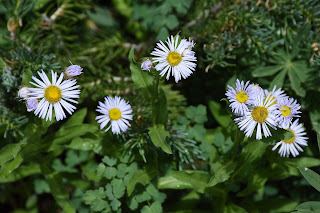 Bought the new tent during REI's "friends and family" Memorial Day sale, although I'm starting to think I probably could have gotten it for less, even without the sale and coupon, had I bought it from elsewhere. At any rate, it's an ALPS Mountaineering Meramac 3 tent. The selling point for me was the oversized shock cords, and, of course, the use of clips rather than a sleeve for the shock cords.

There's nothing revolutionary about that, but it was a step above what I had. Much easier for one person to pitch the tent, that way. 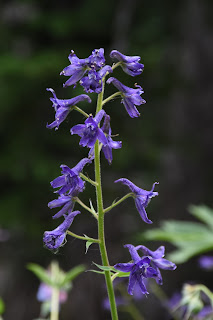 The tent has a large amount of mesh on the walls, so it gives you no privacy without the fly. If it's fair weather and you're just trying to keep the creepy crawlies off of you, you can go without the fly. With rain likely as I set up, of course I used the fly.

Lots of breathing space between the fly and the tent, so I think this would breath decently. Nice long reach of the fly, to keep the water off the tent body. I also bought the fitted "footprint," to keep the tent floor off the dirt.

I was completely dry inside, after a multiple hour deluge of monsoonal moisture. 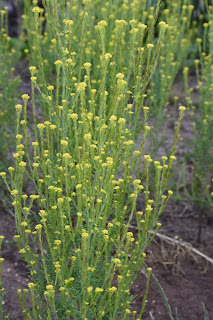 Unfortunately, the clouds never really dissipated after the rain, so even when the rain stopped, it seemed likely that no astronomy was going to happen that night. To be safe, I did drive my car with my telescope the short 1/2 mile or so to the visitor center, but I was pretty sure I wouldn't need it.

Instead, I used the time to hike the Campground and Sunset trails. Actually, I think there are two Campground trails, because one is paved and presumably ADA compliant, while the other is single-track, and has steeper grades. The single track also takes you further from the road, so that's nice. The nice view of what I assume are common yarrow were from that hike. There was also a large boulder, with hollows on the top that filled with water. A bird was bathing in it. It was a pretty sight, but my photographs did not do it justice. 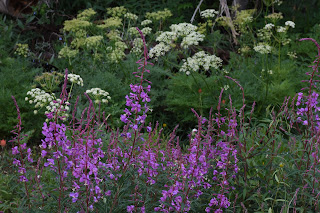 Once at Sunset Point, I spent some serious time, on the chance that maybe the sun would peek under the clouds and give us some magic. That did not happen.

I did get to chat with several interesting individuals who also watched for sunset. I learned some about various cameras, as well. That was a nice plus to the trip. 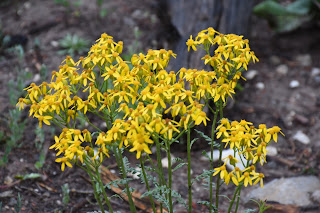 Once the sun was well below the horizon, and whatever colors we were going to get were passed, I walked back to my car, then drove back to my campsite. Used my new headlamp on occasion, which was another nice plus. 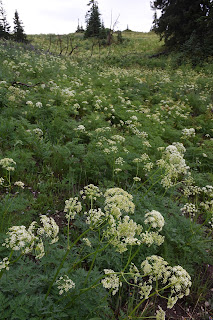 Went to bed under clouds. Got up at about 3:30am, to pee. Zipped out of the tent, and was greeted by a wonderfully dark and clear sky. So I did my business, then hopped back in the car to drive back to the visitor center parking lot. There were too many trees, and the light from the restroom was too bright to take night sky shots from the campground.

Of course, I knew I was racing the sunrise, so I didn't bother with trying a lot of different lenses. I basically just shot at ISO 1600 and f/2.8. Don't remember if 20 or 30 seconds. And even with that, after three or four shots, clearly, the horizon was getting brighter. 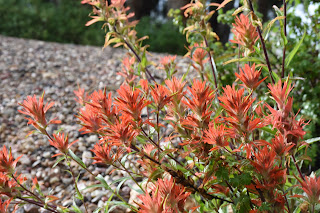 They came out okay, though a little vignetted (meaning the lens shield seems to be impinging on the corners of the frame). That happens if I'm not careful about making sure the lens shield is completely mounted, so that might be it. 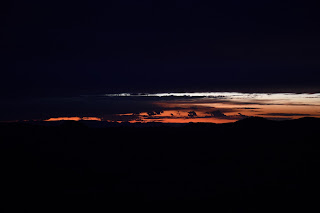 These weren't the shots I was planning for. I was actually thinking I might hike out to Ramparts Overlook and get some shots of Bristlecone pines, silhouetted against the Milky Way. But I knew I had no chance at getting any significant hiking in before the dawn. 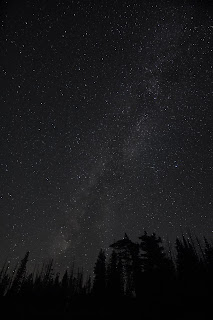 Once the horizon got sufficiently bright that I figured I had no chance at getting serious Milky Way without getting an overly bright horizon, I packed it up and drove back to my campsite.

It was still only about 4:30am, local time. But I was awake, so I decided to break camp in the dark. Hopefully, I did not disturb my neighbors. 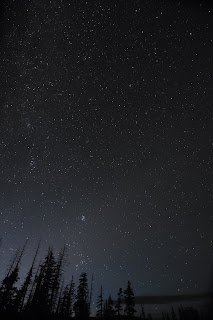 The early start meant I could get back to the LA area by early afternoon, and, not insignificantly, beat at least some of the Las Vegas to LA traffic you get on any given Sunday. Major plus.

Despite not getting a chance to do any astronomy outreach, I thought this trip was a good one. I got some interesting shots in Zion, the night before. I got to stay at the Point Supreme campground, to see how I liked it (I liked it a lot). And I got to do some new hikes, short though they were. Got some nice conversations along the way, too. 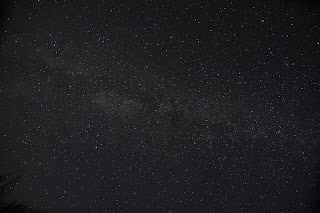 There were other destinations nearby that I thought I might visit that I didn't have time for. However, Cedar Breaks is pretty near by, and I may be able to return later in the year. Not 100 percent sure, though, since I have tentative plans for a trip to eastern Utah during the time when I had been visiting the Cedar City area for the aspen. Anyway, we'll see.

Posted by SkyHiker at 7:49 PM No comments: