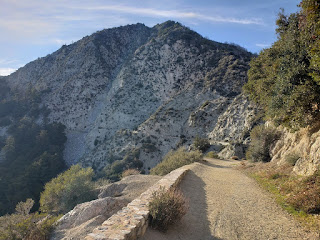 Hiked Tuesday, April 6. Squeezed this one in after work.

I recently (closely) reviewed the new (mid-March) Bobcat Fire closure order, and discovered that San Gabriel Peak and Mount Lowe were now outside the closure area, as was most of the Old Mount Wilson Toll Road, and most of the old Mount Wilson Trail (but not the uppermost section, and not entry into the Winter Creek drainage). So, immediately after work, off I went. 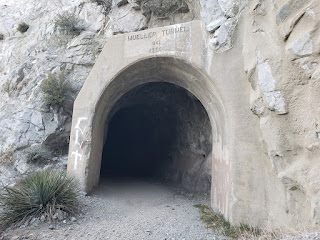 Recent trips up here had been via the trailhead near Red Box Junction. In particular, I started from there to get a nice view of Comet Neowise, last summer. But I have hiked from Eaton Saddle numerous times, as well. Can't find any of my blogged hikes, at the moment, however! 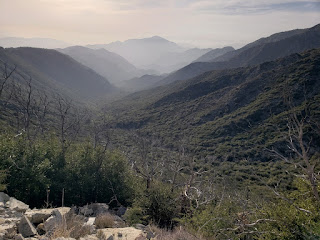 You reach Eaton Saddle by taking Mount Wilson/Red Box Road, up from Angeles Crest Highway and Red Box Junction, towards Mount Wilson. When you first see sky in front of you, you're at Eaton Saddle. The actual road makes a left, here, and heads east, to Mount Wilson. But there is a small parking area at the saddle, on the right side of the road. The dirt road is gated to motorized vehicles, but obvioulsy hikers, bikers, or horses can proceed. 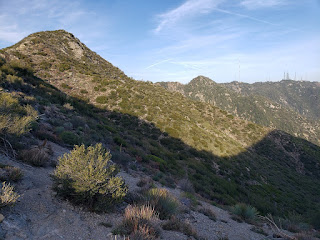 After a short 1/4 mile or so, the trail goes through a World War II-era tunnel. The road is dirt, with a fair amount of rocky debris fallen over it, in places. Easy hike, but you do need to watch for rocks, so you don't kick or trip on them.

Rather impressive drop-offs adjacent to this road. 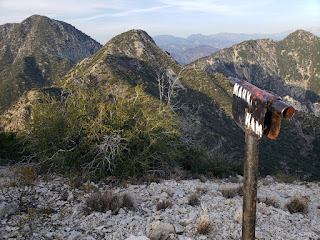 Another 1/3 of a mile or so after the tunnel, you reach another saddle. San Gabriel Peak is to your right (it was right in front of you when you started on this trail, as well). Mount Markham is to your left. Mount Lowe is not visible, but is further, past Mount Markham. Straight ahead on the road would take you down to Lowe Camp. 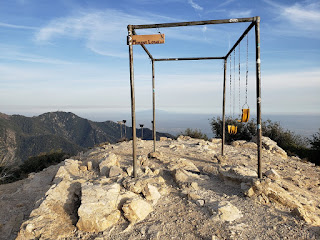 Since I wasn't sure about how much daylight I had, I decided to do the longer peak hike, first. So left, up towards Mount Lowe. 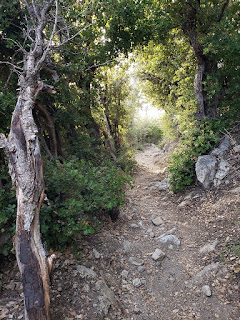 Site tubes are at the top, pointing out the various peaks visible from the promentory. There are also some swings.

I only stayed briefly, then headed back down, hoping to bag another peak.

There were a pair of hikers at the top of Mount Lowe when I got there. They left shortly thereafter, but I caught up to them by the time we got to the ridge of Mount Markham. Had they continued down towards Eaton Saddle, I likely would have tried bagging Mount Markham. But since they stepped aside and paused there, I continued towards Eaton Saddle. 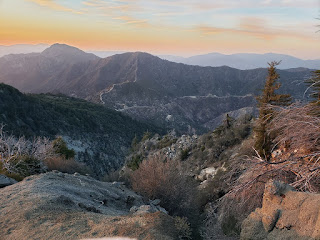 Once there, I deduced I did have time to bag San Gabriel Peak. Headed up there, where I encountered three hikers and one baby in a carrier. Those were the only other hikers I saw on this day. I wore a mask, as is my nature, even though I was well-past two weeks after my second Pfizer dose. Figured the people I might run in to wouldn't know that, and I figured it is still the responsible thing to do. After all, 95% immunity is not 100% immunity. 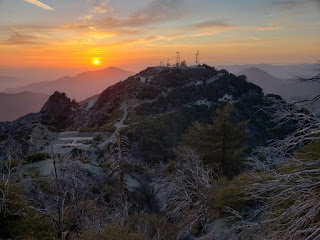 Again, stayed only briefly before heading down. The sun set just before I reached the summit, so I knew it would be pretty dark by the time I got back to my car. But it's a wide trail (albeit, with the substantial dropoff, previously noted), and I had my phone for light, if I needed it. I did, but only when passing through the tunnel. Otherwise, city lights always do a satisfactory job of lighting the way, if you've got a clear view towards the city. 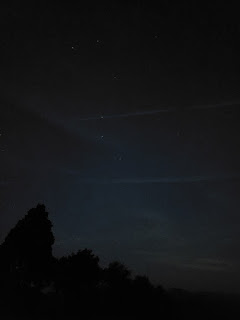 Got a decent shot of the Big Dipper, just before I got in my car to drive home. About 5.6 miles, and 1,500 feet of gross elevation gain, according to Alltrails. Either peak is a pretty easy, post-work hike in the spring. Fitting both in requires a bit more time, or a bit more daylight.
Posted by SkyHiker at 9:58 PM No comments:

Skipped over a number of hikes, and now I've done several hikes after this one, too. That's sort of good news for me, since it means I'm getting in a lot more hiking than in recent years. 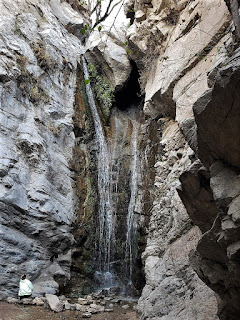 This is two separate hikes. The first, from mid-March, was up to Millard Canyon falls. This one can be pretty, and even a thundering roar, after heavy rains. This year has been drought conditions in southern California, so, although this is as heavy as I've seen it, recently, that's mainly due to it being dry or nearly dry the past few times I was up here.

This makes the falls "nice," rather than "impressive." But "nice" is nice. :D

The parking area down at Millard Campground is still only open on weekdays, though you'd still be obligated to display your Adventure Pass or federal recreation pass from your rearview mirror. 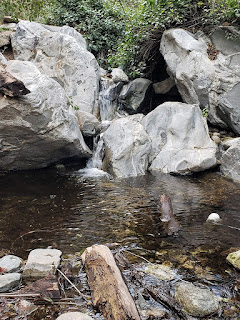 I also hiked up to the Sunset Ridge trail, and wandered over to an overview of the falls. Falls were not impressive, at least not with my cell phone. I've found on recent hikes I just carry my cell phone, rather than my DSLR. I have two of them, but my smaller, "crop sensor" one is acting up, and my full-frame one is heavy. I'm deliberating if I will try to repair or replace my crop sensor one (a Nikone D3400). It's about half the weight of a full-frame dslr, and that's enough to matter when I'm packing a day pack.

Passed a relatively large number of hikers (for such a short hike), but all wore masks. 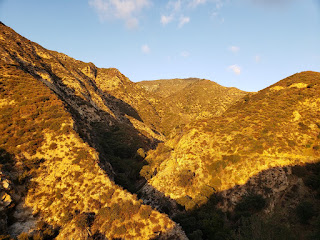 I also hiked Rubio Canyon between these two hikes, but no pictures are included, and I won't separately blog it. Even the lower falls were dry, which did not surprise me, given the year's lack of rainfall. 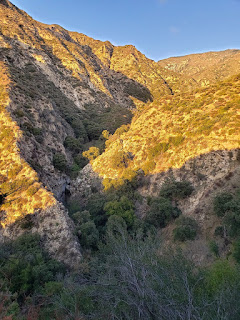 For Eaton Canyon, I hiked in via the Altadena Crest Trail, same as last time. Apparently, I've been doing this for some time, but, this year, it's been a necessity. The Pinecrest gate is still locked, access via the Nature Center is limited, and temporary fencing prevents walk-in access between the Nature Center and Pinecrest. I suppose you could probably walk in from further down the canyon, but I haven't checked this. Figured the Tanoble access was better, anyway, since it's an official trail, and they can hardly get mad at you for walking on an official trail, right? 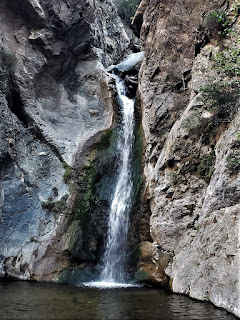 Passed a couple of people on the Altadena Crest Trail, and only three or so inside Eaton Canyon. About half wore masks. The young couple in the canyon was not wearing masks, but they were far from the trail.

Eaton Canyon was flowing nicely, though, again, as expected, somewhat low for the end of March.

Spoiler for a later post, by the way: This week, I took the Altadena Crest Trail, then headed up to Henniger. Signage along the Toll Road indicates the route is open, although the visitor center and bathrooms are closed (which, let's face it, was often the case, even before COVID). 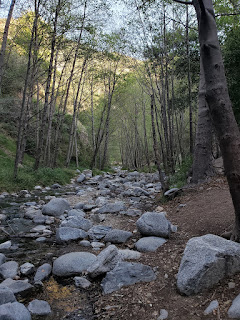 I like the Tanoble option for Eaton Canyon. It makes it a little longer, and with more climbing than even if you come from the Nature Center. Much better workout, and, at least for now, the only way to visit Eaton Canyon after 5pm. Not sure when they'll lift the COVID restrictions.

Other "coming attraction" blogs include another Trip to Valley of Fire, in NV, and a truck trail hike near Morton Peak, in the San Bernardino National Forest. I also hiked around Schabarum Park, on Cesar Chavez Day.

Oh, yes, and last night, I hiked from Eaton Saddle to Mt. Lowe and San Gabriel Peak. Yeah, it's been a pretty good last month or so of hiking. 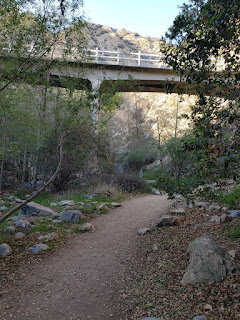 I also hiked the McCullough Hills/Trail 601 trail at least once that I haven't blogged, yet. Hopefully, that's all.

The other thing I just started doing was contemplating some short summer trips, like long weekends and what not. A while ago, the Joshua Tree National Park ranger who's newly in charge of the Joshua Tree Night Sky Festival set the Saturday of Labor Day as the tentative date for 2021, if COVID restrictions were lifted. I'm starting to feel pretty confident that this will happen. So I also started idly checking vacancies at some of my favorite national parks. Looks like Apri and May are pretty much booked, which is how I started thinking about summer. June and July, I started seeing availability in Grand Canyon, Zion, and Cedar Breaks. Not sure if I'll try to one or more of those this summer, but it's a definite possibility. Don't want to wait to long and have all availability disappear. 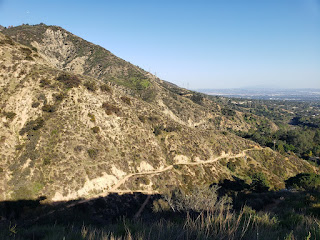 At any rate, that's just me thinking out loud, and maybe reminding you to start thinking making reservations, if you're planning on traveling this summer.
Posted by SkyHiker at 1:40 PM No comments: