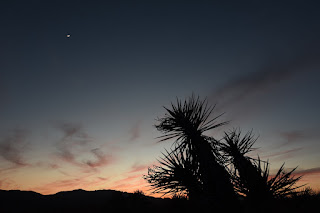 Spent Saturday night (May 18) at Cottonwood Campground, in Joshua Tree National Park. Took a short hike to Mastadon Peak in the mid-afternoon, then waited for dark. I initially intended to walk a bit further, for a better foreground on some of the shots, but decided that might be riskier than preferable. Maybe should have done it, anyway, but I did not. 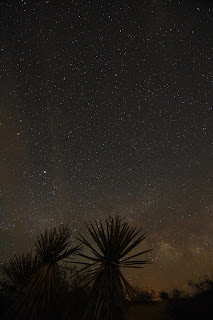 First shot was a hand-held snap, shortly after sunset. Crescent moon, with yucca in the foreground.

Third shot was 20 seconds, same speed, same lens, same aperture, but at 11mm focal length. Also, I "painted" my tent with a little red light from my flash light. The more distant tent was illuminated by who ever was in there! 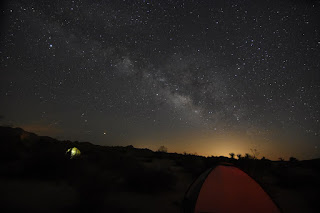 Fourth shot was 20mm f/1.8 Nikon prime lens, at full aperture and iso 3200, 15 seconds. Shorter exposure because of the slightly longer focal length, and to focus more on the individual stars. This is of the "Summer Triangle," composed of Vega, Deneb, and Altair. The constellations Lyra, Cygnus and Aquila are all contained in the shot. I also see tiny Delphinus the Dolphin, just below Aquila. 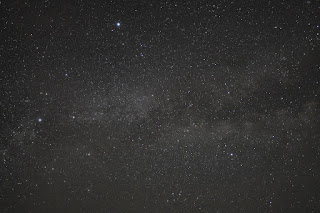 Same lens and settings on the Big and Little Dippers. There are some high clouds or in this shot, illuminated by light pollution from below. 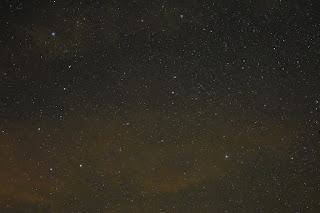 All except the first shot were on my little backpacking tripod. I use the two second delay self-timer and live view, to minimize camera vibrations and to let the vibrations die down after I trigger the shutter. I do have a self-timer, but I had misplaced it, for a while. Ironically as I unpacked one of my lens cases, it popped up, again. May use it, or may not. The two second delay seems to work pretty well, and one less thing to lose.
Posted by SkyHiker at 3:49 PM 2 comments: