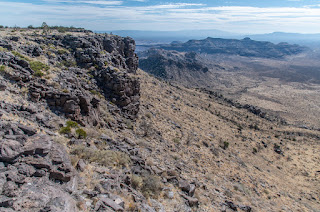 Hiked Sunday, November 7. Been thinking about doing this hike again for quite some time. I'm somewhat surprised to discover I first hiked this over ten years ago. Hiked it again about two years after that. 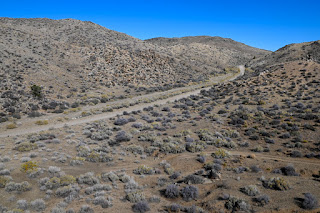 In the interim, there had been at least one major fire and at least one major flooding event, which resulted in a regrading of Black Mountain Road. For a while, I couldn't find the turnoff. The place I stopped the first time doesn't seem to exist, any more. But, being a crosscountry hike, that doesn't matter too much. I mainly just needed a wide spot to park my car. 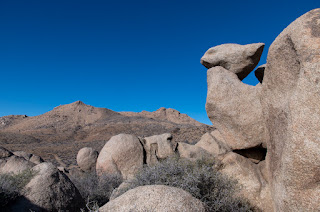 About five miles past the turnoffs for Hole in the Wall visitor center/Black Canyon Equestrian and Group Campground, a jeep trail crosses Black Canyon Road. From the left (as you are heading north), the road comes up from the wash. To the right, it climbs steeply away from the road. I backed my Prius up, with its tail towards the wash and its nose pointed in my direction of travel. 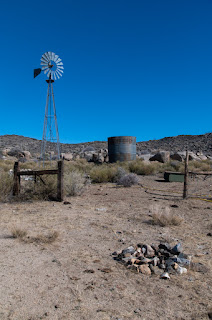 Followed the jeep trail up out of the canyon, and continued forward for about a mile. (I'm ignoring my 45 minutes or so spent circling the boulders near the crest, as I climbed up towards them, removed my backpack as I scrambled, then couldn't find it for quite some time). Ran into a small herd of cows as I did this. Not wanting to tempt them into charging, and knowing I needed to go north, I left the jeep trail and turned left, up a sandy, slightly eroded seasonal waterway.

A quarter mile or so later, I reached the familiar water tank and windmill. Then I turned right, and walked along the boundary fence for the next two miles. 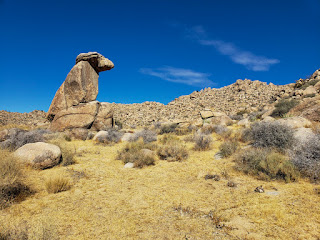 Slid under the fence near the "final" rocky outcropping before coming parallel to the west face of Table Top mountain, and headed up towards the ridge. 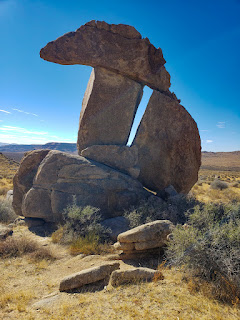 While the trail along the fence is pretty clear, there are numerous intermittant trails heading up and along the ridge, towards the west face of Table Top Mountain. Some are "ducked," and some are not. I probably take a different route each time. Somewhat steep in place, and very slippery on that final pitch towards the lava rocks that are the face of Table Top Mountain. I usually wind up heading near the boundary fence that runs along that ridge, crossing slightly over the line after the fence ends, and head towards an approachable notch that faces mostly west. Those rocks are unstable, so you should take extreme care as you pick your way up. Also, try to avoid damaging the plants as you climb the slippery way towards that notch, and avoid damaging the lichen on the rocks near the top. Obviously, if this trail were more heavily used, this would quickly become an issue. But, in practice, this is a somewhat rarely-walked route, despite the prominence of the mountain, within sight of the campgrounds in this are of the Preserve. 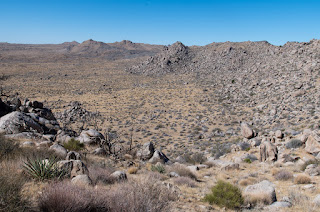 Because of all that wasted energy around those boulders near the start, I was pretty tired making my way up to the summit. I had no appetite for continuing across the top of the mesa, as I had done, in the past. Instead, I took a number of photos right near the register, then scribbled my blog and handle name in one of the notebooks, there. 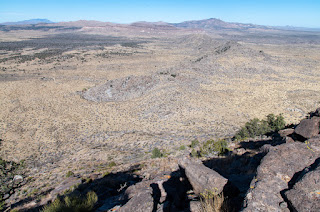 Drank and ate a bit, took a few more shots, then headed back down. Wound up taking a different route back than I had taken up, which is not unusual. 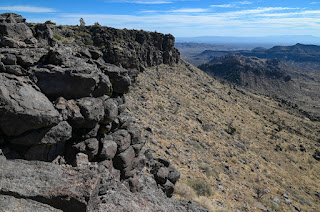 My Alltrails app says I walked 7.5 miles, so maybe 7 miles, if you subtrack my wandering. Add close to another mile, if you walk across the mesa and back. Thirteen hundred feet of elevation gain.
Posted by SkyHiker at 11:33 AM No comments: 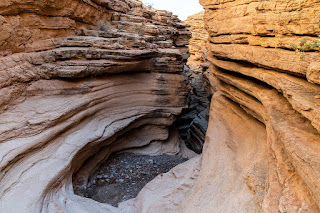 This has been a year for me to "discover" Lake Mead NRA. It's existence is not a secret, of course. But as a repository of interesting hikes, this has been a good year for checking new things out. 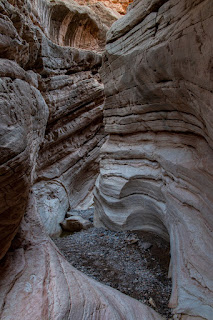 My first set of hikes was on trails around Lake Mead were from NPS handouts and flyers, and that kept me busy for a year or two. Then you've "done everything," and then what? Well, yes, some repeat trips, especially to Liberty Bell Arch.

So, this year, I poked around Redstone a time or two, and, of course, Valley of Fire (still need to blog). Then I took three hikes in various parts of the Bowl of Fire, which was all new to me, and kind of exciting to "discover." I also hiked up to Northshore Peak, which was also a kick. 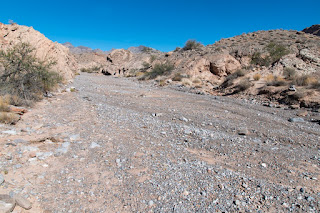 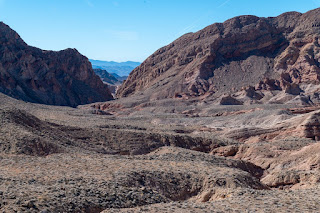 The actual hike: At about mile 16 of Northshore Road, there's a turnoff on the left for Anniversary Mine Road. It's paved immediately at the junction, then turns to dirt. I could drive my Prius about 200 yards up the dirt road, to where it first drops into Lovell Wash. It's a steep, sandy drop, which would require high clearance and four wheel drive to navigate. I parked on the south side of the wash, and crossed the wash on foot. I picked up the dirt, then paved road on the other side. 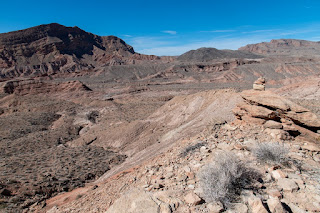 About 1 1/2 miles of walking on pavement (bearing left at a split) brought me to where the road would cross the mouth of the wash, except it was washed out. So this is apparently the "regular" Anniversary Narrows trailhead.

Had I gone right at the split, the road would have met up, but it would have brought me closer to signed and posted private property. According to Bird and Hike, even the trailhead my way is private, but it was not signed, and there was no fencing or other indicating that I could not proceed up the wash, here. Hopefully, this means the access dispute is settled. 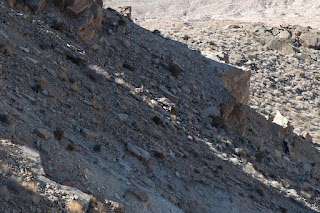 From the initial narrows, you pass several mine entrances and tall, crumbly walls. After a bit of a weave, the wash turns right, and widens. after another 1/4 mile, you reach the narrows. My first photo in this post is from just after the narrows begins. Probably a half-mile of narrows, with only a few places that would require short class 3 scrambles. One required stepping on a well-placed pipe. Then the wash widens, again. 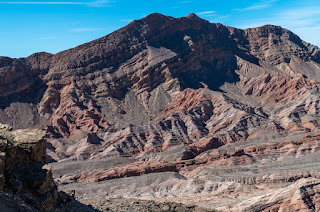 I'd estimate another 1/2 to 3/4 of a mile along this wider wash before I saw ducks (stacked rocks) indicating a trail branching off from the wash, on the right. This was before where Alltrails indicates, but, being crowd-sourced, I have no way of knowing which approach was better without walking both. And I've only been here, once. 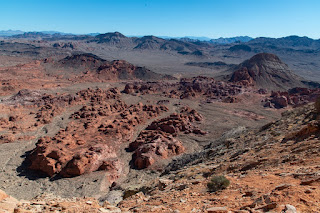 I carefully watched for ducks at each split, and made my way up the various narrow washes. Eventually, I started to climb out. As I climbed along the ridge, the view to my north opened up. Very impressive.

The only place I veered from a ducked route was where there was a narrow gap in the ridge. The duck had you going up near the top, only to drop down, in the notch. I saw no advantage to doing that over just giving up the altitude earlier, then working up the less-steep route back to the ridge. 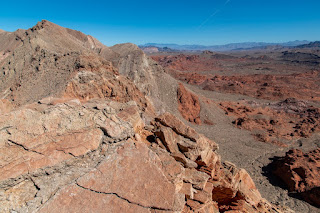 This route made it an ocassionally steep, ocassionally narrow walk up. No real scrambling, until after I made it to the ridge between upper Lovell Wash and the Bowl of Fire. Then, approaching the first of several peaks, some scrambling might be required. I decided to content myself with my view where I was, however. I was getting tired, and didn't want to risk a fall. So I kept things pretty easy.

By contrast, for much of my hike to the ridge, I heard voices, and eventually spotted a man, trying to coax his female friend to follow him up the scree of the very steep north face of this Anniversary Peak. 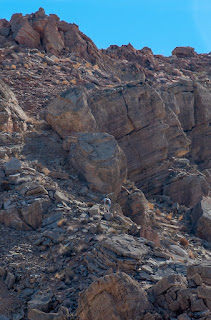 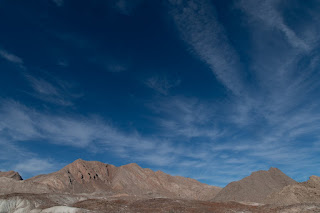 He'd have been better off retreating diagonally to the ridge I took up, then heading up that way. But people (myself included) hate giving up hard-won altitude. His friend, meanwhile, made the right choice. It wasn't going to get easier, not the way they were trying to go. Most times, if it's a hike (as opposed to a climb), and you start having to do unprotected climbing, you're probably not on the right track, any more. Turn around and figure out where you lost the trail.

My Alltrails app says I walked 10.8 miles, and gained 1621 feet, that day. Five and a half hours on the trail, nearly five of them moving. Pretty slow going, because of the steepness, the poking through the narrows, and the walking on sand. But a great hike, that's for sure!