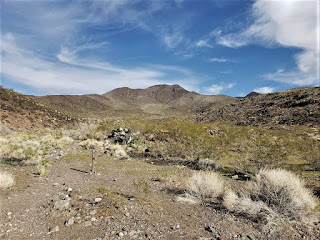 Hiked Friday, March 6. Who'd have thought that this would likely become my last weekend of hiking for the foreseeable future?

Trail 404 is indicated as a loop that starts at the Shadow Canyon Trailhead in Henderson, and runs over Black Mountain. From the trailhead, the south end of the loop is the more frequently traveled. From the top of the detention basin near the trailhead, it's the first indication for Trail 404. I have hiked that trail twice. 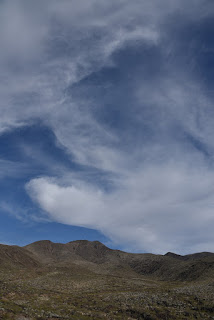 The area trail map at the detention basin and other BLM documents indicate that there is supposed to (or at least, is proposed that) this trail be a loop.

On my last trip up to the top, I did see one Trail 404 indicator on the "other" side of Black Mountain, but I did not see much evidence of an actual trail heading back down. With darkness encroaching, I elected not to try the unexplored way back down in the dark, and returned the way I came. 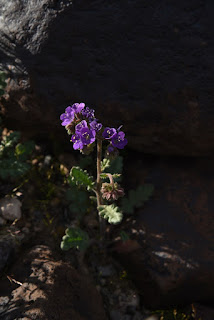 In February, on a late afternoon, I spent an hour or so at the lower end of the trail, seeing if I could follow the northern loop. After some misfires, I did locate the trail, and followed it far enough to at least get some altitude, before darkness fell.

This time around, I had a bit more time, though I was still starting in late afternoon, after my drive up from the Los Angeles area. Still, I thought I'd have enough time to make it to the top, if the trail did exist. This turned out to be overly optimistic. 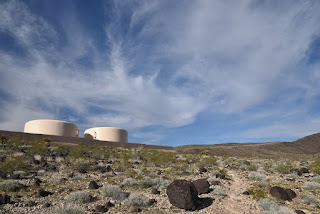 The north loop starts almost at the end of the concrete apron at the top of the detention basin. From that marked trailhead, you stick to your left, staying mostly out of the actual wash bottom, until you cross over the wash, maybe 3/4 of a mile up. You get quite close to the two large water tanks, but you do not attain the ridge on which they are located. 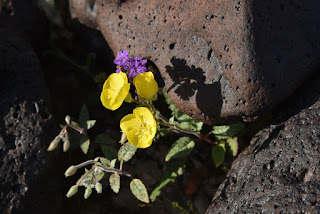 On the day I hiked, there were some flowers in bloom: phacelia and probably sun cups. They were common, but by no means a carpet. I think they probably got somewhat denser, but still not a carpet. It doesn't look like the soil would be conducive to a thick bloom. 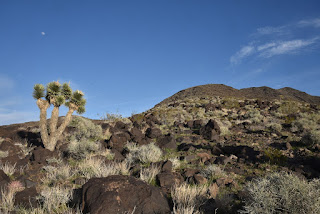 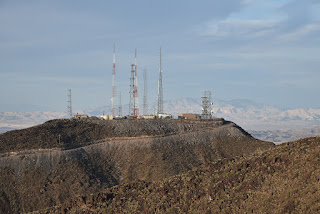 From the first picture in this post, you're generally going to approach from the left, along that ridge, except for the earlier part, where you're first running to the left of the lower wash. By contrast, although not obvious in this picture, the southern route runs, not level but easily, until the final push. 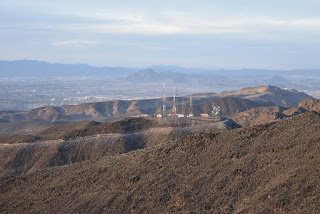 As you start the climb on this northern route, there's a pretty serious canyon to your left, which you don't get that close to, but you could certainly peak into. The broadcast towers of what people normally think of as Black Mountain are, first above and to your left, then level with you, then well below you. 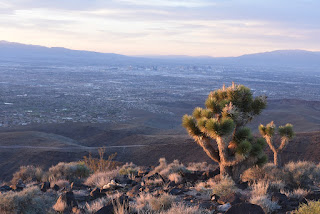 Relative handful of Joshua tree as you gain altitude, too.

Good views to your west and south, but your view to the east and west is largely blocked by the mountain your are climbing. 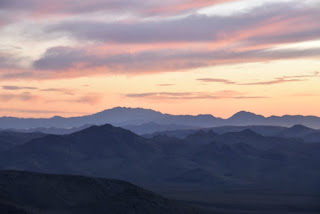 By the time I got up there, the sun was no longer shining on the Ivanpah solar complex, so no idea at what point that comes into view. But the mountains certainly looked nice.

After two hours of hiking, I was still what I assumed to be at least half an hour from the top. The sun was getting low, and I was going to be late getting back to my wife, so I turned around, well short of the top. 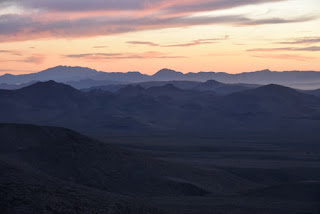 By contrast, two hours put me at the top when I came from the southern end. Can't say for sure if my conditioning was identical, but my feeling is that, yes, the northern side is a lot tougher going up. It's also a lot tougher coming down; I fell on my butt several times in the dark.

One of these days, I may again try this approach, when I'm sure I have the time. But I'm in no hurry to repeat this hike. The southern loop is definitely preferable.
Posted by SkyHiker at 4:17 PM No comments: