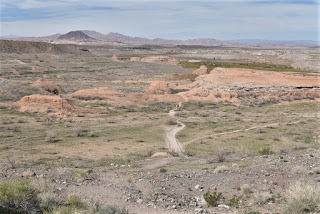 Hiked Sunday, February 16. This trail is only a little over two miles long, though you can make it longer by taking any one of a number of use spurs, or by linking up with the River Mountains Loop trail, and taking that as long as you want. 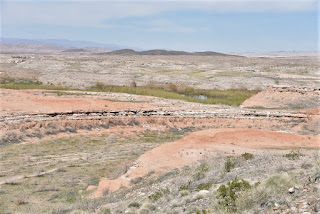 This trail begins near the "left" side of the first picnic area on your left, as you drive into 33 Hole Overlook/Picnic Area. As of the date of this posting, a .pdf for the hike is available here: Owl Canyon. 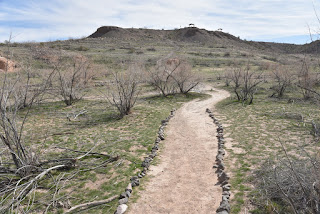 That's the same flyer they handed me at the Visitor's Center, except mine was black and white. :D

I didn't actually read it much before I hiked. I should really stop doing that.

In any event, from the trailhead, looking northish, you pretty much see what's in the first two pictures. The first one shows the trail, very well-defined. The second is a bit to the east, showing a marsh that I did not visit. 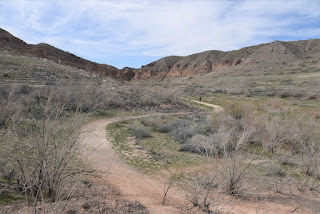 The decent is steep, and you do need to take care, but it did not strike me as especially dangerous, with care and balance and good shoes. The flyer text says it's 75 feet down; the map side says 45 feet down. Either way, it's not sheer drop, so just be careful. 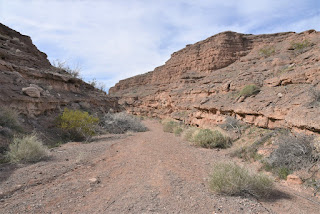 The "main" or actual trail heads over the first rise, then around a second berm. LOTS of dead tamarisk in this basin, so they clearly have this as an invasive species management area. 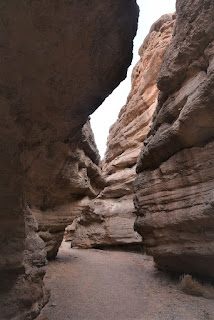 You keep the small hill on your left and head towards where the wash narrows.

All of this would have been underwater less than 20 years ago, by the way. So the tamarisk is also a relatively recent arrival in this basin, and they are trying to keep it from completely taking over the wash.

The walls here are a conglomerate of mixed-stone sizes, similar to White Rock Canyon, but more colorful (not white!). Maybe more like the stuff that composes the top ofLiberty Bell Arch.

[Both links are mostly of the same hike, but the first one had more pictures of the actual White Rock Canyon]. 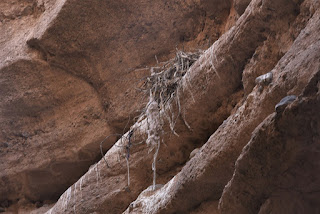 Because of the narrowness of parts of the wash, it actually gets pretty dark in places. I mean not dark so you can't see were you're going, but dark enough to need to adjust your camera for some pretty long exposures or high ISOs.

On my way through one of the narrower areas, a large led-hiking group was coming down. Their leader pointed out an owl nest, in the wall. He also pointed out a LOT of owl droppings, dripping from the walls. 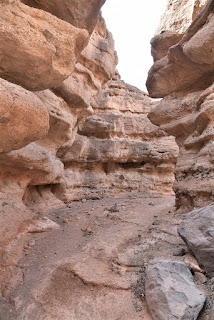 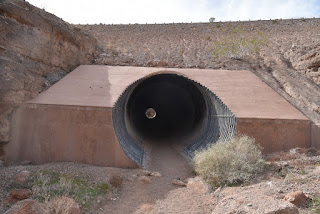 I turned around just before the second set of tunnels, on the assumption that I had pretty much seen what there was to see. Also, my wife was waiting by the car (she didn't want to hike; I usually go on my own, but we were spending some time together, and I was hoping she could join me on a short hike, but the initial descent was more than she wanted to do.
So I was initially just going to reconnoiter, but she said to go ahead, so I did. 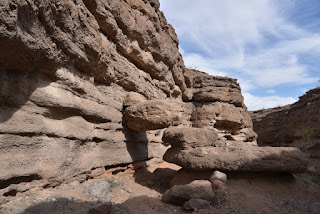 Returned the way I came. So just two miles for the day. New trail, though. This rail was not mentioned in Lake Mead NRA literature as recently as a few years ago, so this is a new one. I don't know how much of the erosion happened just in the last 3-4 years, or if it was just "rediscovered" and added to the list of hikes, even though it had existed even before the reemergence from the lake.

Easy hike, though not recommended for high summer. If you go in summer, bring lots to drink, and take it easy.
Posted by SkyHiker at 11:59 AM No comments: 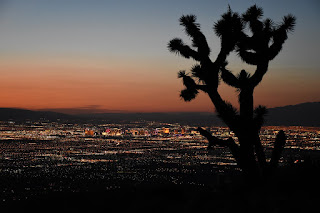 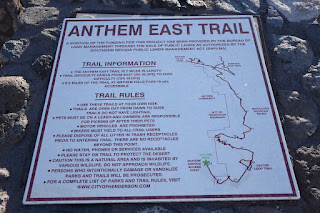 There are multiple official access points for hiking into the Conservation Area, but the BLM website only directs you to one (Petroglyph Canyon).

For the rest, I had to look elsewhere. Bird and Hike is by far the most detailed extant site I know of for hiking in the Las Vegas area. 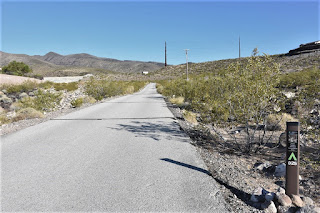 For this trail, you access from the Shadow Canyon access point. The free version of the All Trails app and website will also direct you to the trailhead.

It's pretty straightforward. From either I-215 (southwestern Beltway) or Saint Rose Parkway, take Eastern Avenue south. Where it splits (about two miles south of Saint Rose Parkway), stay left, on to Anthem Parkway. Two and a half miles later, turn left on Atcheley Drive. Google Maps suggests you go straight for one mile, including the .6 mile after Atcheley transitions to Somersworth Drive. After the previously-referenced one mile, turn left on Shadow Canyon Drive. Note that this will be the second time you see Shadow Canyon Drive. 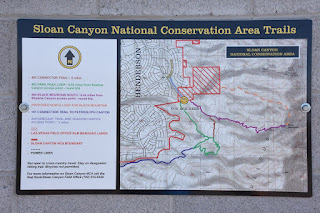 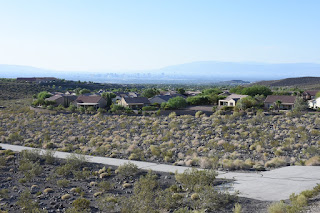 From the trailhead, walk along the paved walkway towards a detention dam. You'll pass an access point to the City of Henderson's Anthem East Trail. Continue walking on the main trail, towards a small structure at the top of the dam. Attached to this structure is a BLM trail map. 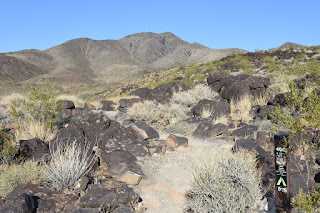 For Trail 404, continue past the structure, walking along the top rim of the detention basin. About halfway along that top rim, trail sign directs you up Trail 404. (Should you pass to the other end of the rim, another trail sign also directs you up the other end of 404. However, that trail is not well-defined at the upper reaches, and I would not recommend that route. 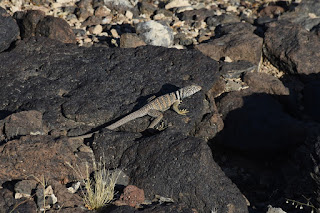 Along the preferred route, the trail is well-marked and well-defined, except for the last section, where various use trails alternatives make their way to the top of the mountain. There is only one sign trail split this way, and you go straight to stay on Trail 404. 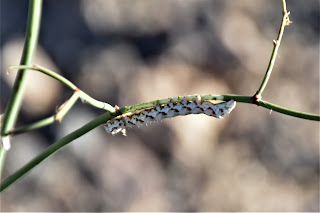 Volcanic rocks are you companion along this entire route. You may see rabbits, as well as lizards and insect life along the way, but it's a pretty arid route. About halfway up Black Mountain, scattered Joshua Tree begin to appear. Still pretty sparse, and none look very old. I don't know if this means they are only recently starting to grow here, or the mountain soil and environs are just too tough, so larger ones can't get enough water or can't bare the heat or cold, and die. But, what ever the reason, there are no really old, really large Joshua Tree along this route. 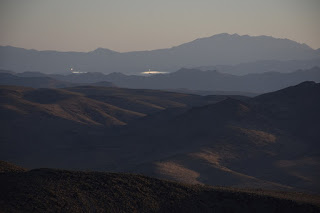 As you ascend Black Mountain, the panorama expands. The bright focus of several solar generating towers are visible to your south-southwest. That's Ivanpah Station, across the border, in California. You see those to the west of I-15, coming or going towards Primm. 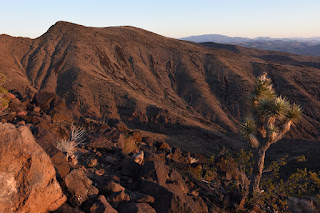 When you get to the top, you'll also see several fields of solar panel fields, mostly to the east. U.S. 95 also shoots from left to right. 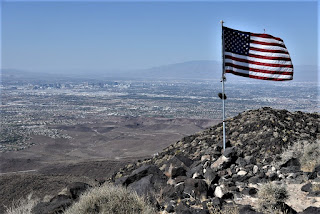 Further to the north, you may see I-11, the Boulder City Bypass, that heads from the Beltway, south of Boulder City (and separated by a large mountain), and around, to Hoover Dam. Scanning even further north brings you to Henderson and, eventually, the Las Vegas Valley. The Las Vegas Strip is somewhat west of north. 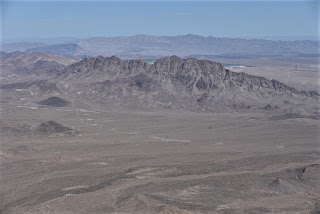 Also at the top are a roundish boulder wall, to protect you against the elements. Probably an ammo box and informal trail register will also be up there, along with an American flag, flapping in the breeze. If there's a flag there, you'll have seen it on the way up, so you'll know how much further you had to go. 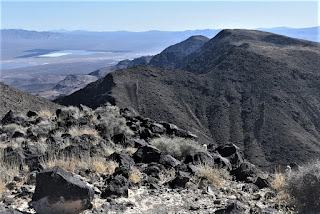 The first time, up, I returned the way I came. The second time, I tried continuing a bit past the peak, because I saw a trail sign, down near the saddle to the next rise, to the north. However, following the ridge past that, I saw no additional indicators of a trail route. 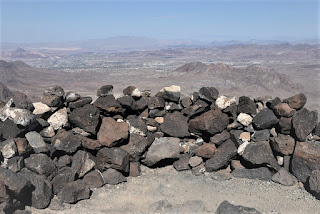 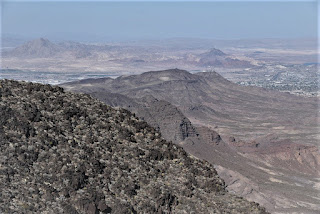 But with no obvious trail to follow and not a whole lot of excess daylight, I backtracked back up to Black Mountain and returned the way I came. On a future trip, I will likely try following this alternate trail from the detention basin, to see if I can follow it up to the other end of the loop.

Bird and Hike gives the round trip distance at about 7.5 miles, with a net altitude gain of a bit under 2100 feet. There is essentially no shade on this trip, and no protection from the elements. Probably best to avoid the heat of a summer day, or especially windy times. But it's a very nice late afternoon hike, provided you are prepared to hike in the dark.
Posted by SkyHiker at 1:17 PM No comments: