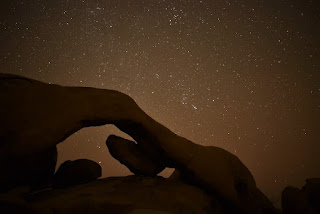 After doing an evening at Sky's the Limit, for their Night Sky Festival 2018, I drove back to Arch Rock, to get some photos of Orion, rising over the arch. This shot is 25 seconds at 20mm, f/1.8, at ISO 1600. I'm not sure if it's just reflection from the dust in the air, but the arch seemed brighter than last time, even without "painting" the arch.

As noted previously, Arch Rock is a short hike, maybe 1/4 mile each way from the actual trail, which starts in the White Tank campground. Even if you park on the main road (which you'll need to do, late night, unless you're camping here), it's still less than a mile, each way. 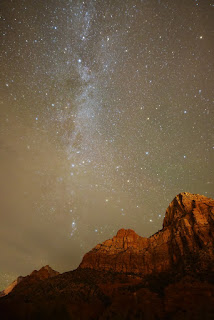 I still need to write up my Canyonlands and Arches hikes, but these were from just yesterday. I had ambitious plans for the weekend, but had to cut them short on account of personal exigencies. So this is all I have to show for the long drive from the LA area to Zion. I got there too late for what were some really spectacular coloration on the cliffs at sunset, and even too late to look for fall color on the river. But, to be honest, I'm pretty sure I was a week early for that. So, just some Milky Way shots.

A few months ago, I got some nice southern Milky Way shots, looking to the south, down the Virgin River. But, tonight, there were too many clouds and too much light that way, so I had to shoot north. And, even that way, there were a lot of clouds. 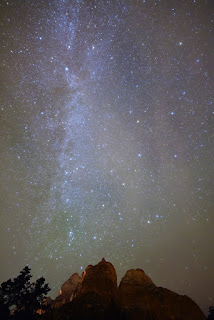 Transparency was also poor especially near the horizon. I also noticed some effects of shooting with my ultrawide lens. Definitely some astigmatism and field curvature. But not too bad at smaller sizes, where the warped stars are less apparent.

These were all taken in the 1/2 mile or so between Canyon Junction and the Human History Museum, along the Pa'rus trail.
Posted by SkyHiker at 10:10 PM No comments: