More Around the Observatory, February 2018 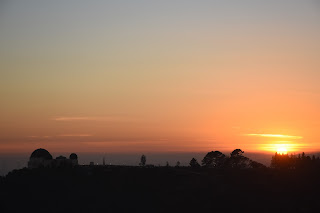 Several hikes around the Observatory in January and February of this year. It's convenient for me, as previously mentioned.

This first shot is kind of interesting when you compare it to the one I took around Winter Solstice. In just six weeks or so, the setting point for the sun has moved very significantly to the north. 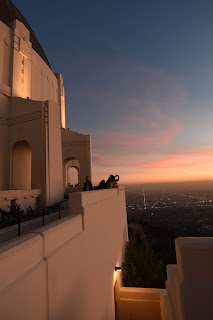 Thoe shots were taken from the same place (Glendale Peak), but, near Winter Solstice, the sun set just a bit north of the Astronomers Monument, on the lawn of Griffith Observatory. Six weeks later, it's setting near the edge of the parking lot, south of the lawn.

I also enjoyed this second shot, taken a bit after sunset. There was a soft, pink light, very dim, but photographed well. It lasted only 10-15 minutes after sunset, before everything went to blue. 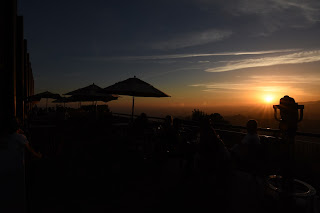 The rest of the shots were taken a few days later. I brought my 11-20mm zoom, with two goals: I wanted to get some sunburst shots, and I wanted some dark sky, ambient light shots of the building. 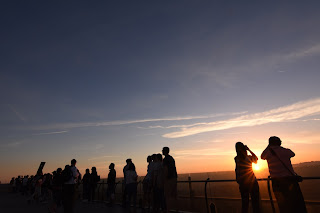 To get the sunburst shots, I stopped down the aperture. Some came out okay, but, still, you need to see the pictures relatively large to see the sunburst. They're created by light, passing through the small opening of a narrow aperture, with rays corresponding to where the aperture blades let a bit wider amounts of light in, near where each blade intersects with the one next door. 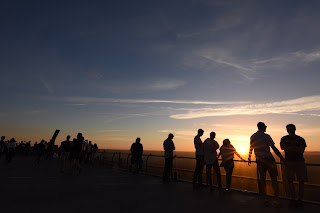 It's one of those things I only read about recently, though I had obviously seen the effect in my shots for years.

Sunset at the Observatory is often an "event," just because of the large number of people, gathering on west-facing overlooks to watch. I mostly just expose for the sky and aim for silhouettes. Adding sunbursts was just for a new twist on the shot. 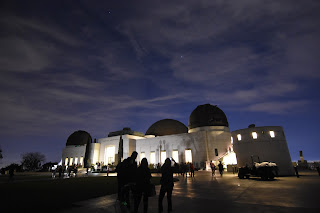 Finally, out in front of the building, I utilized the fast lens (f/2.8) to hand-hold shots of the building and lawn telescopes. The first shot was at 12mm. At that wide and angle, you get some pretty significant distortion of the shape of the building. 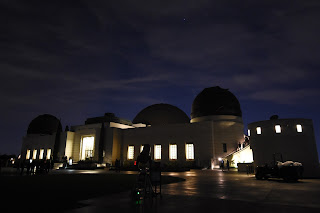 The second shot is at about 16mm focal length. The distortion is much less noticeable. I shot a shorter exposure length to compensate for the increase in shake-blur that would be apparent at the longer focal length. Both are sufficiently sharp for my purposes, though, when I zoom in on the shot on my laptop, I can see some streaking of the stars, indicating I moved a little during the exposure.
Posted by SkyHiker at 10:04 AM No comments: