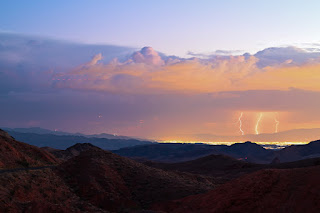 Not an actual hike. I took these last Saturday, July 17. Headed out to Lake Mead NRA, NV, with the intent of doing some astronomy. However, before reaching my intended destination (Redstone), it was obvious that the clouds weren't going to let me do much observing. 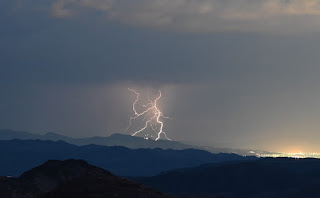 So I pulled off at Northshore Summit trailhead, from which I have hiked many times. 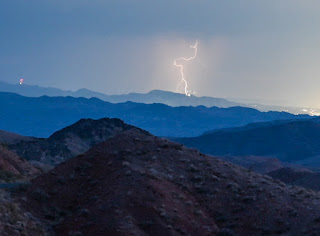 Lightning was frequent off to the west, over and beyond the Las Vegas Valley. Definite monsoonal storms, all over the southwest U.S. that night. So I set up my camera and shot numerous 10-30 second exposures, using a mixture of ISO and f-stop settings on my Nikon 85mm f/1.8 lens. 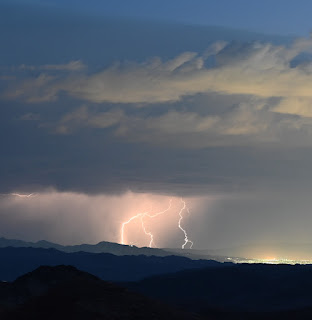 Most of those shots were then cropped, partly to make the lightning more prominent and partly to crop out the ridiculous number of jet trails crossing the frame.

This was my first semi-serious effort at catching lightning. I'm pleased with the results. 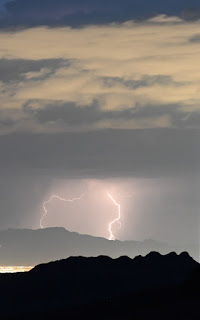 I was mainly heading out to track down Comet 2017 K2 Panstarrs on my own. Not able to do that. Will probably try again, though not sure when.

This one isn't getting very close to us, nor all that close to the sun, so it will only be marginally naked eye, at best.

Multiples hikes still to blog. Finally went through my dslr shots from lake June, from a trip into the White Mountains and eastern Sierra. Hope to get those up in the next week or so.

Posted by SkyHiker at 6:05 PM No comments: