Hiked Friday, June 26. It was a hot weekend in the Las Vegas Valley. Friday's high was 104. And it turns out that, in Las Vegas, hot days don't really start cooling off until after dark.

Started my hike around 5:30pm, from the Shadow Canyon access point, off of Shadow Canyon Drive, east of Anthem Parkway, in Henderson. The venerable Bird and Hike site gives directions, here. At that time, my phone said it was 102 degrees in Henderson (not sure if it might have been a degree or two cooler up in Anthem). 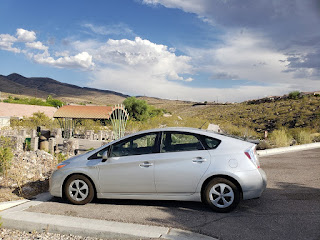 Here's my Prius, at the trailhead. :D There were no other cars in the small lot (room for about five cars), nor on the street adjacent to the lot. This boded well for my hope to social distance. 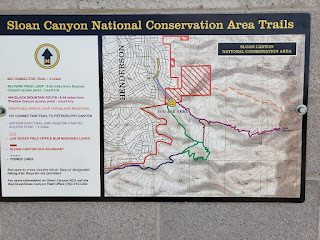 A map on the side of the building at the top of the detention barrierprovides this overview of your hiking options from here. It's color-coded, so if you're color blind, you may not find it helpful.

I've hiked from this trailhead about five times previously, but always on BLM Trail 404. I've summited Black Mountain from the southern side of the loop, and made it a fair distance up, but not to the top, on the northern loop of Trail 403. 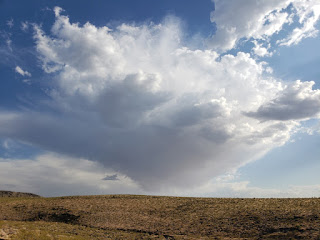 So this was my first time hiking at least a partially new route. In this case, to minimize retracing my steps, I planned to take 404 south as I had done in the past.

At least initially 404 pretty much heads towards Park Peak, before making a late turn, towards Black Mountain. Just before that trail begins its steep ascent up Black Mountain, Trail 402 splits off, to the south. 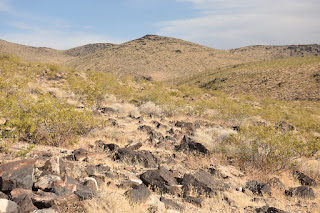 After a half-mile, Trail 402 ends, when it intersects with the lollipop path of Trail 403. I then took Trail 403 to the top of Park Peak. From there, I could either retrace my steps back down, then return via Trail 403, or attempt to go over the peak and continue on the loop. In the end, I decided to just retrace my steps on that small portion of Trail 403. 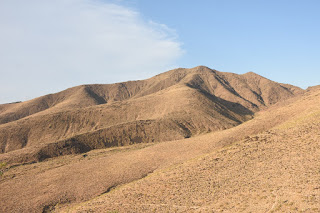 According to All Trails, it's 843 vertical topping out at 3822. By contrast the Black Mountain trail says it's 2063 vertical feet to get on top of that mountain, which tops out at 5167. That means this hike is a lot easier, being both shorter and much less vertical. That means the view here is less than half the view at Black Mountain, since Park Peak doesn't let you see much of what's north, east or south of you, beyond the hills you're in. Fine view of much of the rest of the Las Vegas Valley, though. 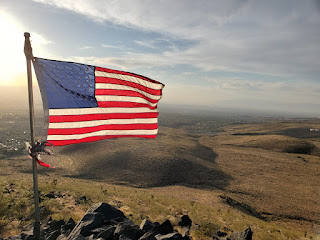 Also, unlike Black Mountain, you're not high enough to see the solar electricity towers in Ivanpah. However, like Black Mountain, there is a flag up there, as well as an ammunition case that contains what I assume is the trail register. I don't usually bother writing in there, since I have no idea where that stuff ever goes. 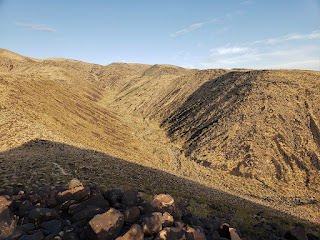 So it's a nice view, but not as expansive or top of the world as Black Mountain. Still, when you're hiking in 102 degree heat, this one makes more sense. There's not a lot of afternoon shade on either of these trails.

I walked at a leisurely pace, drinking often. And it probably dropped 4 degrees or so by the time I reached the summit. There was alsoa nice breeze, which made the heat easier to handle. 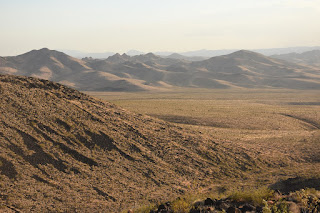 Returned back on the same segment of Trail 403. Not long after re-passing the junction with Trail 403, I saw where Trail 403's "other" side came down to meet the main segment.

Easy to follow, except there was no signage at a junction where the trail split, again. There was a fair-sized Joshua Tree, there. My All Trails app said to go right, which made sense, so I went that way. 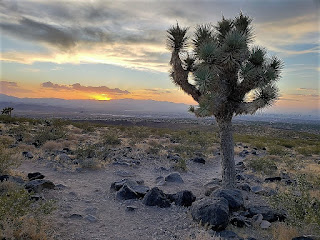 There were two other splits, much further down, that were not entirely obvious. But, by then, I could see the detention basin, and followed the more logical of each split (keeping in mind that a steep descent is NOT obvious). Back to the car as it was getting dark (wearing polarized sunglasses made it seem darker!). Turned around, and saw the "Nevada Strong" lights on the side of Black Mountain. I had read about this as a father-son project, a month or so ago. Forgot all about it, until I saw the lights, myself. 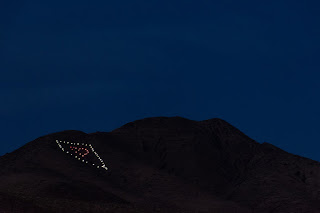 About five miles for the day. Relatively modest altitude gain. But a good hike. And I saw only one other person on the trail. Several more cars in the lot and adjacent street by the time I got back, and one mother and child, possibly waiting for someone to come down, or just taking a very short walk of their own.

So it turns out that 100 degree-plus temperatures do wonders for social distancing on the trail!
Posted by SkyHiker at 8:45 PM No comments: 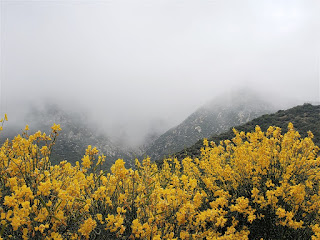 First time I'm blogging an Angeles National Forest hike in nearly two years! I don't know if this means I really haven't been in here in that long, or if I just never managed anything worth blogging about. Hard to believe I didn't even take any waterfall hikes last spring.

Josephine Peak is ground I've covered before. Looks like I blogged this trail in 2015 and 2016. Definitely clearer weather, then! 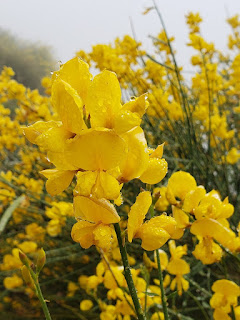 Both previous times, I ran into relatively few hikers. Also, I knew the "trail" is a fire road, wide enough for a pick-up truck, at least. Seemed like a good "social distancing" hike. Also, it was overcast down in the Valley, and I had this idea that this hike would let me walk above the clouds and enjoy the sunshine.

I hit the trail late morning. Most people look to have started earlier, as several large groups and numerous smaller ones were heading down as I headed up. Most (but definitely not all) wore facial coverings, at least when they approached. This was less true the later it got.

I asked one couple heading down if the trail took them above the clouds, and was slightly disappointed to learn that it did not. 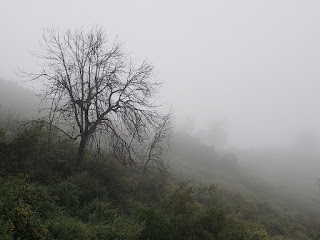 With the misting rain, it was somewhat cool, although I was wearing shorts and a sweater. But I didn't actually get wet, and, as I kept moving, I did not feel cold, and I knew I wouldn't be out long enough and would move fast enough to stay warm.

Ridiculous amounts of (invasive) Spanish broom were in bloom. Very fragrant. The clouds made for some interesting views of the obscured mountains and trees.

Being my first significant hike in several months, I felt pretty tired by the time I reached the top. Very fast coming down, though.

It's about 7.5 miles round trip, and about 1900 feet of elevation gain. Pretty easy to keep on the right track. The only semi-possible way to get lost would be to turn off the road and head towards Strawberry Peak, and that trail, while far from hidden, is not nearly as prominent as the fire road.
Posted by SkyHiker at 8:02 AM No comments: