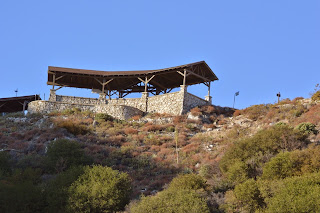 Hiked Wednes-day, August 13. So back in the time machine, again. :D

This was a "bye" date in my jury duty, which I wrapped up back in mid-August. So I took a personal day off from work, and used this as a chance to clear my head. 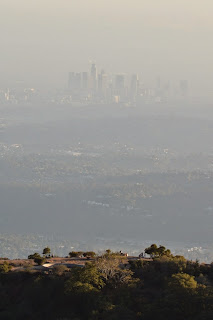 We had deliberated on Monday and Tuesday, then had the previously-scheduled day off. It was a fortuitous break, as it gave everyone on the jury a chance to decompressed and think about the case we had just heard. Several noted that they were having trouble sleeping the past few nights. And, after hearing that, it occurred to me that I had also had some trouble sleeping. I was thinking it was due to an unrelated matter, but perhaps the case was weighing on my brain, as well.

It also felt good to be exerting myself a little. The problem with things like deliberation, after all, is that all the adrenaline is building up, and it's got no release. Hiking gave me that release. 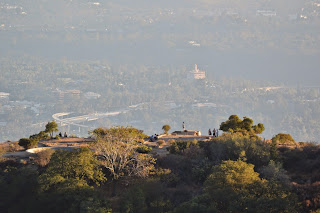 So, as I hiked, I talked through the facts of the case, and by the time I got back home, was feeling very confident and certain about my decision on the verdict.

The perfect hiking weather helped. Well, having a little more daylight would have been nice. Because of my late start, I didn't have time to make it to Inspiration Point, as was my goal. But, as you can see, I got to within sight of my destination--Probably about 1/3 of a mile away before I had to turn around, and have enough time to get down before dark. 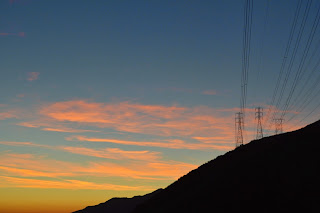 But, of course, when you're hiking, it's all about the journey rather than the destination.

As I was making my way back towards Lake Avenue, the clouds lit up nicely on the western horizon. I snapped several pictures in the deepening twilight. 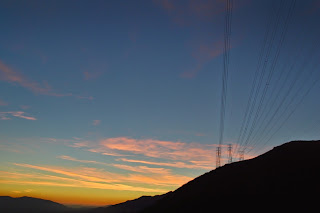 Maybe eight miles for the afternoon. Perfect end to a a day.

The Sam Merrill Trailhead is at the north end of Lake Avenue, in Altadena. The Sam Merrill takes you up to Echo Mountain. From there, you can continue to Sunset Ridge, Mt. Lowe, or Inspiration Point. 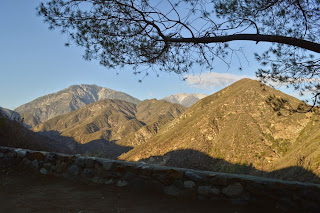 Hiked Tuesday, August 12. One of numerous hikes from the past that I need to blog. Shoemaker Canyon is sometimes called the "Tunnel to Nowhere." Like its more famous cousin (The Bridge to Nowhere), this is a hike that takes you to a defunct road project. 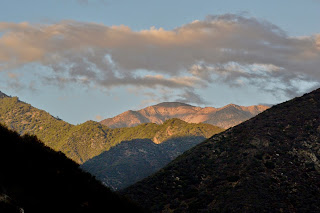 In this case, the road was to be an additional evacuation route from the Los Angeles Basin. At some point, I guess they figured the road didn't actually serve any useful purpose, so it was shelved. What's left is a road cut and a couple of tunnels that combine to give you a nice four-mile-ish hike, high above the East fork of the San Gabriel River. 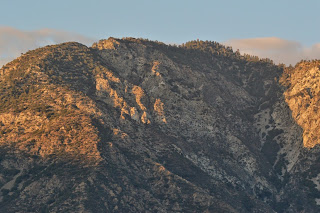 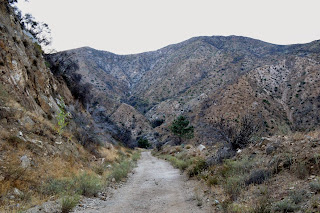 On this particular day, it was a late afternoon hike I took, after jury duty (at the time, I was serving on a criminal court jury), with enough time for just a short stretching of the legs. But it had been a few years since my last visit, so it seemed like a nice time to return to the area. 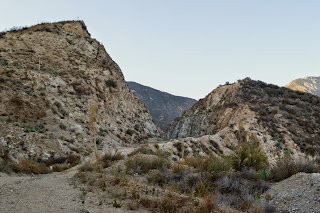 The views today were great. The sun was low, the clouds were colorful, and the mountains were warmly lit with the long rays of late afternoon. 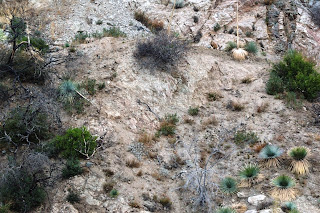 As I ap-proached the first tunnel, I heard rocks tumbling down the nearby cliff. After some scanning, I found the source--a couple of deer, trying to put some distance between themselves and me. 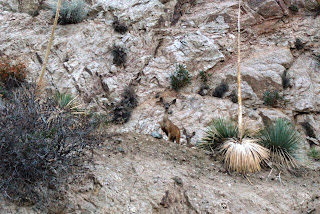 I took many pictures, but most were of the deer's hind-quarters. The shot above is the only one with their faces clear. The next shot is a crop of the previous one. 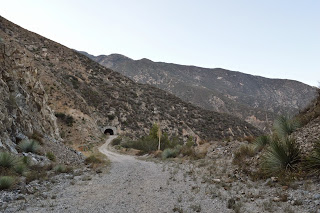 It being the middle of a long drought, and their obviously being not a lot of grass or water nearby, I felt bad for making the deer exert so much energy on account of me. So I turned around there, a little earlier than I planned. 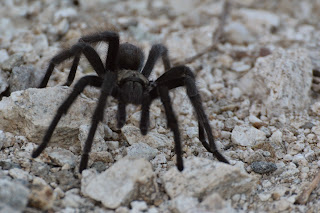 On the way back, I practically walked right into the largest tarantula I had ever seen. I've seen a number, both in the local mountains and in the Mojave Preserve. But, really, this guy (or girl) was huge. 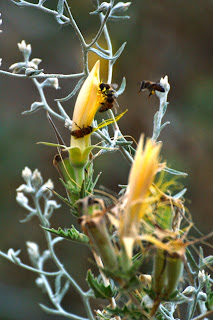 Continuing back to my car, I frequently passed the sound of many buzzing bees. They were forcing their way in to numerous blazing star flowers.

Got back before it was completely dark, and felt pretty good about my day's short little hike. Better than nothing, anyway.
Posted by SkyHiker at 3:14 PM 2 comments: 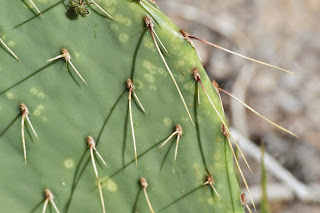 Hiked Saturday, August 30. Shorter hike than I wanted today. I didn't realize I had forgotten my sun block until I was on the trail, and didn't want to risk getting too burned. 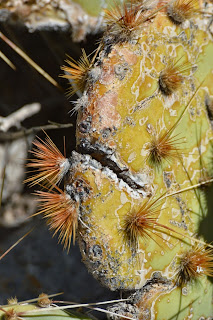 Latest hike as of today, with several more still needing to be blogged.

Red Rock National Conservation Area is just west of Las Vegas. Of course, I've done a number of hikes in Red Rock the past few years: Turtlehead Peak. And Calico Tanks. Twice. Also Icebox Canyon. Also twice.
Also, the Calico Hills. That's all in addition to my pre-blog hiking; I lived in Las Vegas for seven years, so I probably hiked most of the trails in the park at one time or another, though definitely not with the sort of regularity I would have had after the hiking blog. 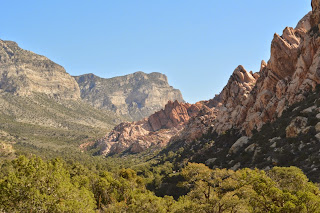 As an added incentive to hike in Red Rock, my America the Beautiful pass expires at the end of September, so I'm still trying to get my money's worth. I may even try to squeeze a trip to Bryce Canyon or Zion in this month. But probably not. They're long drives, and I also want to go to Great Basin National Park in September. This might be too much driving in a month. 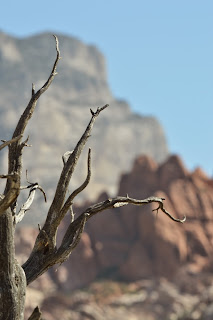 But if not September, then maybe Zion in October. I'm hoping to catch the leave changing.

Given my previous time in Las Vegas, I probably hiked here before, but I don't have a strong recollection of being here. The vegetation was surprisingly thick, given the relatively low altitude of here versus up around Mount Charleston. Water clearly runs through the limestone and off the sandstone and settles some on the valley between these two structures. 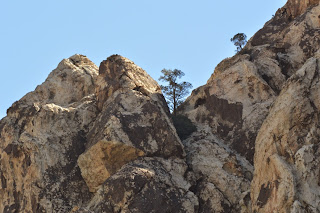 There's also the occasional tree fighting to survive in the sandstone crags, and the trees that fail to survive elsewhere in the valley. 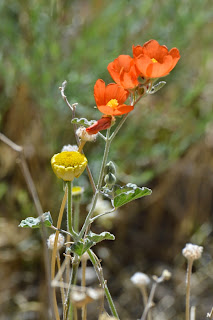 It's been a pretty good monsoon season, so even before I got to Las Vegas, I noticed the more greenery along the highway than one would expect, given the 105 degree temperatures. Fall wildflowers were not blooming as thickly as I had seen them last year, but there were definitely a lot of flowers blooming.

I didn't recognize their species, however. With the exception of the desert mallow, they were just "white flowers" and "yellow flowers." 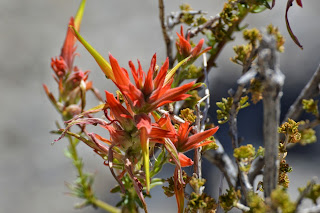 They were only modestly thicker around the actual spring than they were elsewhere along the trail. The one that looks somewhat like Indian Paintbrush was practically hanging over the small pool the spring flowed in to. 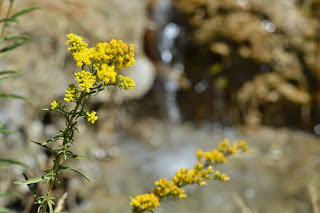 You can see the spring in the background.

Meanwhile, the little white guys seem to have an interesting life cycle. After looking like little white flowers, at some point they turn into those stringy things you see below. 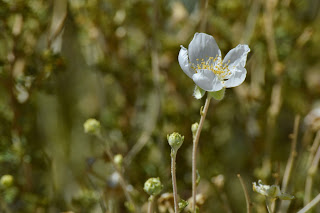 If there weren't some plants with both types of flowers on them, it would have been harder to realize they were the same species. 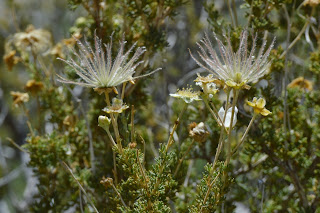 I began my hike at the Willow Springs Picnic area, which is off the 13-mile scenic loop. From the picnic area, I headed northwest, along the Rocky Gap 4x4 road. Had I my sunblock, I might likely have just headed on up there and to the top of the escarpment. But, having forgotten it (and not realized this until I was well on the rail), I knew I wanted to cut it short. So I turned at the sign indicating the way to La Madre Spring, which it said was about 1.1 miles from the spring. 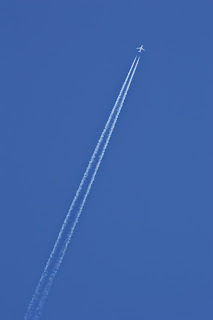 Total distance for the La Madre Spring hike is given as 3.3 miles, though it did seem a bit further than that. The only significant climb I noticed was the last bit, as you climb past a couple of concrete pads and on up to the ravine where the spring resides.

I returned the way I came.