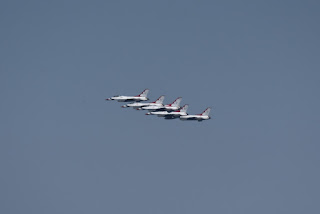 Hiked Friday, May 15. Probably about five trail miles, and another mile of wandering, looking for a high spot with good views north and south.

Over the past week, Los Angeles County has been making some adjustments to their "Safer at Home" guidelines (they call it an "order," but if it's not clearly enforced, it seems more like voluntary suggestions. Particularly when they were rolling it out, it was not clear how far you were allowed to drive for your permitted hiking). Most trails in the greater Los Angeles area officially closed in mid-March, but began reopening the previous weekend, with more opening this week and weekend. 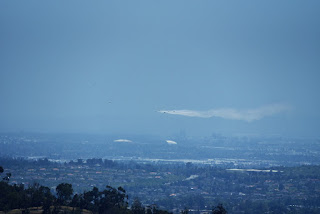 Sometime during the past week, the Puente Hills Landfill Native Habitat Authority reopened most of their trails to public use, with the "requirement" for facial coverings when in proximity to others, and proper social distancing. 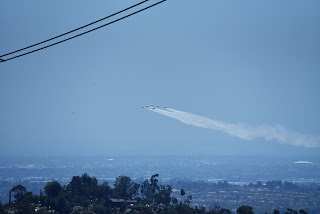 Meanwhile, on Wednesday, May 13, the U.S. Air Force Thunderbirds announced they would be flying a "salute to front line workers" in the San Diego and Los Angeles areas. A somewhat detailed map of their route came out on Thursday morning. However, perhaps intentionally, it was far from easy to determine their actual route on the map. Also, post-hoc reports suggests there were substantial departures from their announced route. 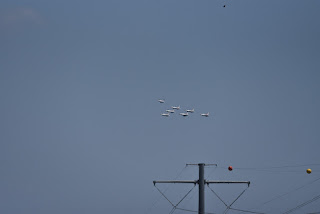 To the extent I could see the streets on the route map, my home actually was pretty close to the route, if they flew it. However, my house has no site-lines. Trees and homes severely limit how far I can see in any direction. Similarly, nearby, at least, there are severe limitations on how far I could see, so even if they flew within a 1/4 mile of where I stood, if I didn't know which way to look at the right moment, I'd see nothing. That's why I wanted to try for open space, preferably with some altitude built in. 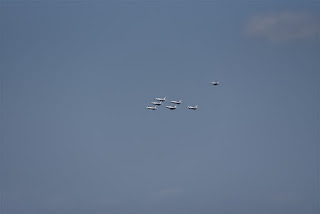 One open space area that did seem to be near the proposed flight path was land under the Native Habitat Authority. It kind of looked like the Thunderbirds would come up from Orange County, fly more or less up Hacienda Blvd, between the Hacienda and Puente Hills, then bank towards the west, flying up near El Monte before curving a bit to the south of the Los Angels Civic Center. 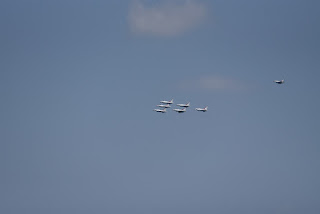 So now I had to figure out how big of a deal this would be, and if I should either try to find a spot where there is very limited parking, either off of Turnbull Canyon Road or off of Hacienda Blvd. Or, alternatively, there would potentially be lots of parking, but obviously crowds, as well, if I entered at Seventh Avenue or Schabarum Park.

Of course, Seventh Avenue was the starting point for numerous hikes of mine,, going back to nearly the beginning of my blogging days. 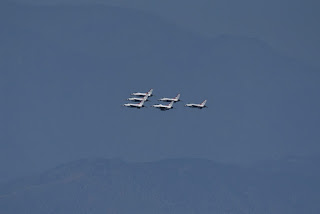 I've hiked from Schabarum Park, as well. And, also, I've hiked from Turnbull Canyon Road. But that had been a while, and I was aware of road closures and construction in the area, and didn't want to chance getting lost. I also wanted to avoid possible people congestion from a usually crowded place like Schabarum Park (though no idea how crowded it is, now). 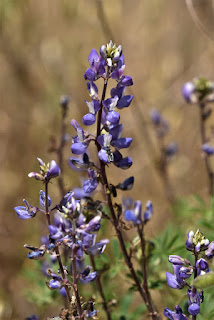 So I chose Seventh Avenue. Took the main (Ahwingna) trail up. One and three-tenths mile to the crest. From the crest, I debated where a good view would be, and eventually decided to head southeast, towards where they would pass between the Hacienda and Puente Hills. Walked to, then on, the paved road to Turnbull Canyon Road, crossed the road, and headed up a trail/fire road. Looked for a high spot, walked up there, chatted with a fellow hiker/jet seeker for a bit, then decided to keep going east. But ran out of time long before I got to Hacienda Blvd. 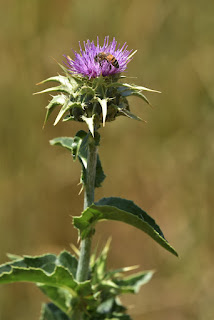 With maybe ten minutes before the expected flyover, I headed to the base of some high-tension power lines. Another mile or so further east (maybe a bit less) would have been pretty spectacular, but I didn't want to chance walking between hills when the jets arrived.

So I pulled out my camera with a long telephoto lens attached, and snapped a few shots from my vantage point, of passing passenger jets, standing power lines, gliding turkey vultures, and so forth, just go make sure I had my exposure set correctly (iso 400, f/8, and about 1/2000th of a second). 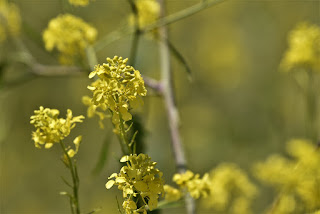 More or less on-time, I saw a rapidly approaching "contrail," trailing smoke, moving fast and low. They cut the smoke as the reached the foothills, and zipped quickly through the pass. Then they made a sweeping turn to the west, flying over the warehouses factories of the City of Industry. 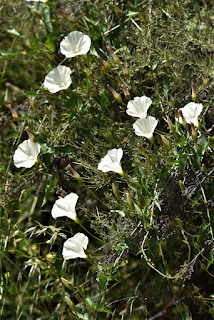 So, in retrospect, had I just stayed down closer to Seventh Avenue, I would have been closer than I was now, although I would have missed the smoking approach. Of course, I would also have missed out on the hike, which was the other thing I wanted to do. 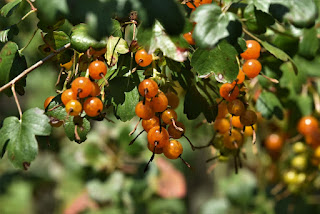 After the flyby, the walk back was pretty hot. Sucked down a quart of icy sugar-free Powerade after I got back home.

End of the spring bloom is still going on. Lots of thistle and sticky monkey flower, evening primrose, wild mustard, and pearly everlasting. Some vetch, and the fruity thing in that one picture.

Annoyingly, the vast majority of hikers I passed were not wearing proper facial covering. I kept what distance I could, and, obviously, the odds of infection from just a walk-by must be pretty low, but this is the critical point: wear face coverings now, reduce transmission, and we can get back to "normal" with fewer fatalities. Be careless now, and the fatalities increase and the restrictions continue for longer. I'm ready for this to be over. 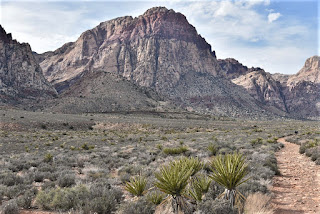 Hiked Saturday, March 7. Approximately five miles, out and back. Wrapped up my last weekend of hiking in Las Vegas with a late afternoon visit to Red Rock Canyon National Conservation Area.

My initial goal was to try for a post-sunset shot of Orion and the winter Milky Way over the red rocks. I had done this last year, and hoped to try again, this year. However, the moon phase made this a little iffy, and the clouds made it impossible. 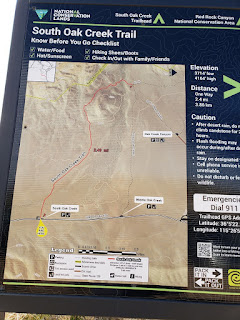 Nonetheless, I intended to do some walking out there.

Oak Creek Trail has three access points. The first is from the end of a spur dirt road that leaves the scenic loop, just before it returns to NV-159. 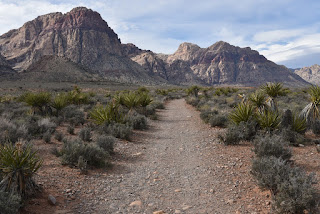 The third access point is a bit further along NV-159, and is called "South Oak Creek Trailhead." 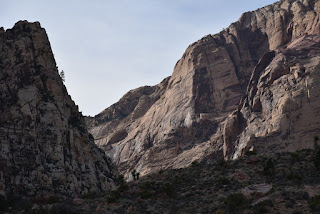 All three of these trails potentially intersect, although the Middle and South Oak Creek trails obviously have longer distances to get to a more southerly location; it takes quite a bit longer to get to actual Oak Creek from the latter starts. Both also more head towards the base of Mount Wilson, before heading towards Oak Creek and Rainbow Mountain. 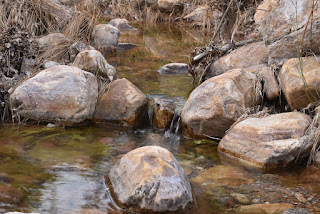 Formally, the South Oak Creek trail is supposed to go up to, then around, a knoll (Potato Knoll), befoe returning to NV-159. Before doing the loop, I first walked a bit up the actual canyon, walked as far as I was comfrotable, then turned around. Saw some water in the creek bed.

There are numerous use trails through the area, so figuring out if I was on the right one or not was not obvious. But I got a chance to enjoy the outdoors, either way. 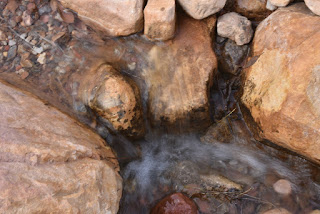 The sun was rapidly disappearing as I made my way back to my car. Nice side-lighting as the setting sun dropped beneath the cloud layer. I took a last few pictures, then hurried along to my car. Thus ended my last hike in the Las Vegas area in the last two months. 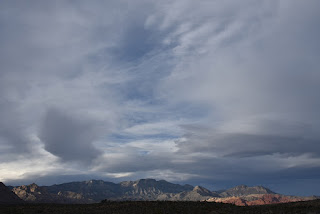 Because of the whole "safer at home" thing, as well as numerous trail closures in my usual stompinggrounds, I haven't gone off on any hiking adventures in quite a while, since then.
Posted by SkyHiker at 10:24 PM No comments: