This was the last of my hikes in Utah, at the end of a very rainy few days last fall. It rained VERY hard the night before, as I was camped in Devil's Garden campground, in Arches National Park. I can again report that my relatively new tent from REI (ALPS Mountaineering Meramac 3 tent, which I have mentioned in the past), performed well enough, and I'm still happy with that purchase. 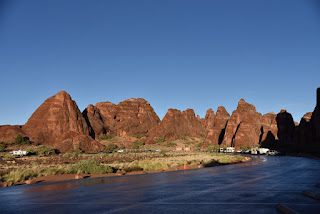 On this trip not only did it rain, but it blew like the Dickens. So my latest tent report is still that it can take extended, heavy, vertically-falling rain. It can also take gusty winds (I'd estimate 30-40 mile an hour gusts, as in really serious, and I was more than a little concerned my tent might fail). However, if it's raining AND gusting, the design does allow rain to blow under the fly, and water will get on to the floor of the tent. Still, despite a very extended period of rain and winds, it wasn't THAT wet, especially since it was just me, and I could move water-sensitive stuff back into the car or to the other side of the tent. 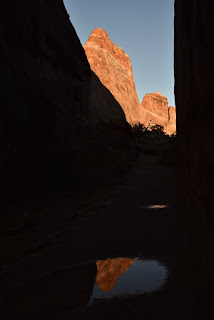 I got up and left the tent at the site, thinking I would have until noon to vacate. Turns out I was wrong; you're supposed to be out by 10am, so I was just about two hours late leaving. Not sure if the next night's resident got delayed.

Since I was blissfully ignorant, I left the tent up to air out and dry out, and walked down from my campsite to the Devil's Garden trailhead. I'd estimate that was probably about 3/4 of a mile. Not sure when I actually got started, but possibly as late as 8 or 9am. It was still pretty empty, then. 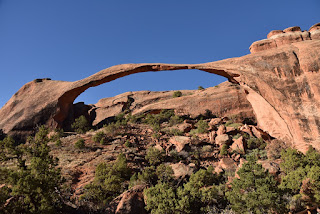 Passed some a pair of FDLS couples, heading out. They must have started several hours earlier.

There were several pools of water on the ground, so I played with some reflection shots.

Pretty easy trail to Landscape Arch, in my opinion. Mostly flat, well defined. Just 3/4 of a mile or so from the trailhead to the viewing area. Huge arch. Can't go under it, though, so you need to admire it from afar. 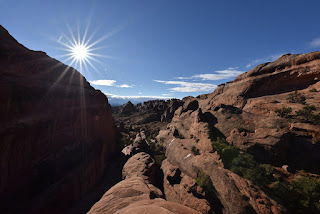 Still thinking I had plenty of time, I figured I'd continue to the next pair of arches. This requires climbing along the top of a potentially intimidating fin. I mean, it's probably still just Class 2, but with pretty good drop offs on either side. So if you're vulnerable to getting psyched out, this might do it. Personally, I took my time, and did fine, but a few people did freak out and turn around here. No shame in that. You don't want to freeze up AFTER you've started up this fin. 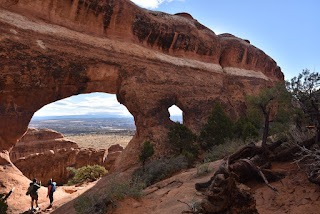 At the top, I turned around, stuck my ultra wide angle lens on to my carmera, stopped it down to f/16, and got a nice sunburst over the fin.

The rest of the trail to Partition an Navajo is straightforward. Nothing scary, though you do need to pay attention to signage, both coming and going. It's surprisingly easy to lose the main trail coming back from Navajo Arch, and wind up heading back to Partition Arch, again. I say this because, when I was heading back from Partition Arch, I ran into someone who was accidentally heading my way, instead of back to the trailhead. Also, when I was coming back from Navajo Arch, I briefly found myself heading towards Partition, too. 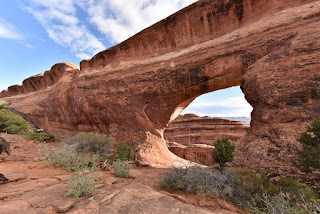 There were pools and small muddy, wavy sediment flats, as well as several small pines and assorted other plants that needed to be dodged, but, again, pretty straightforward. You just keep the fin on your left, and eventually, you come to Partition Arch.

Couldn't get as many shots from the other side as I wanted, because some selfie-obsessed hikers spent an inordinate amount of time, posing in the arch. I waited, patiently, at first, then less patiently, before finally deciding this was never going to end, and headed back down. When I reached the junction, I turned left, to Navajo Arch.

I had hiked these trails at least twice previously, but the last time was probably 24 years ago, so obviously I did not perfectly recall what i would see. Turns out Navajo Arch is pretty small, and somewhat hidden away. But, on seeing it, it looked very familiar. 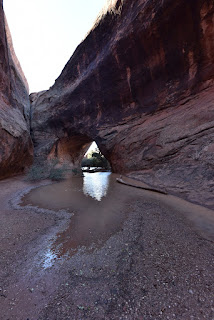 Because of the recent rains, there was a pool of water beneath it. But the water was shallow, and it was possible to walk through the arch on previously-placed small rocks and dead tree branches without getting my socks wet. The last picture is shooting back, through Navajo Arch. The trail approached it from the other side.

Returned, then still took my time laying out the tent on the picnic table and behind my car, to dry out, as I ate lunch. Finished packing just before noon, but just after the camp host advised me that I was supposed to have been gone by 10am. The early checkout was unexpected.

I had a wonderful time in Arches and Canyonlands, despite the rain and clouds. I'm even planning a return trip, since I did not manage to get my Delicate Arch and Milky Way shot, this time around.

Posted by SkyHiker at 3:39 PM No comments: 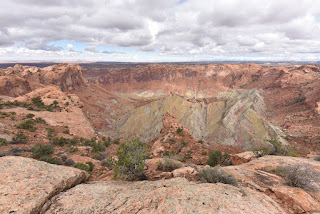 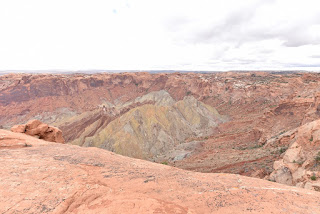 According to this information, Upheaval Dome is likely the remnants of a very ancient impact crater. Given the age, you've not looking at the actual crater, but at what resulted below the surface, when the crater was created. Salts upsurged into the vacancy created by the crater, leaving what we see, still beneath the surface. Erosion has now exposed those materials. 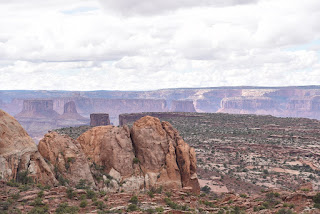 The trail itself is given as about .3 mile to the first overlook (basically, just up a short but steep trail from the parking lot). After that, you can continue about a mile further, along the south rim of the canyon, to another overlook. That's what I did. On the other hand, it would be accurate to note what I later read: The view is pretty much the same, from either point, so you might wish you conserve your time and energy for a different hike. 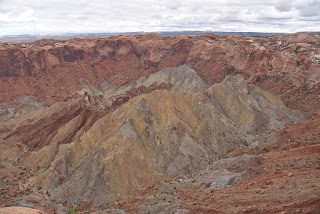 While the crater view does not really change, the wider view of the more distant areas of Canyonlands do reveal themselves, and that, at least, was something. 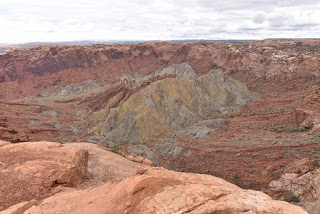 You do get a slightly better view at the "central peak" within the crater. The variations in color and texture are interesting to view, with a telephoto or binoculars.