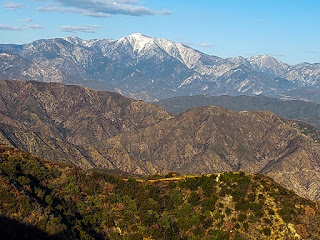 Hiked Sunday, March 21. First day of spring! Also, a week after DST, so I've got good afternoon time for hiking. Late start. According to the timestamp on my photos, I didn't get started until about 3:30pm. But I managed over 11 miles for the day. Mt. Bliss would have even gotten me back by sunset, except for a wrong turn I took. 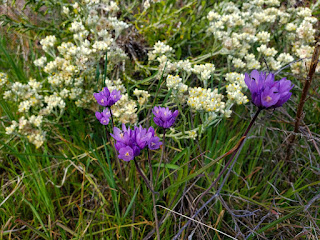 In terms of timing, this hike was sort of like my first time up there, in the sense that I came down in the dark. Amazingly, that was over ten years ago, during my first 100 hike year. At least my third time to the top of Mt. Bliss, however.

As is usually the case this year, I was looking for a hike where I would likely be able to maintain some separation between me and any large group of unmasked hikers, and this one did not disappoint. I only saw four other hikers over the course of 4 1/2 hours. Also, the trail is nearly entirely Van Tassel Motorway, wide enough for a firetruck. 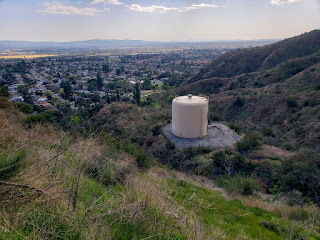 This trail starts on the mountain-side of the corner of Opal Canyon Road and Brookridge Road, not far from the corner of Melcanyon Road and Brookridge Road. Foothill Transit bus 861 stops at this corner, in case you want to try a public transit hike, at some point. It's basically a scheduled neighborhood shuttle, but it does link to the Gold Line (City of Hope Station), as well as the "Murder Bus" (Foothill 187), among other routes. 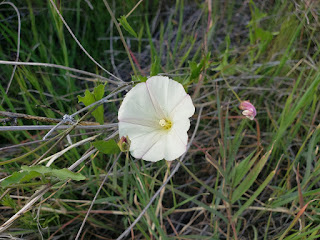 Uphill from this corner, Opal Canyon is bsically a driveway, up past a house and to a gated water tank. If you climbed that fence, you'd be trespassing. However, if you walk around the fence, you've fine. On the other side of the little fenced off area, you'll discover a surprisingly well-defined trail, quickly heading up the hill. After maybe a 1/2 mile of weaving up the hill, the trail intersects with Van Tassel Motorway, the aforementioned dirt road used by SCE and CalFire, among others. The area burned in the 2016 Fish Fire. The more recent Bobcat Fire burned som of the upper reaches of this hike, as well. 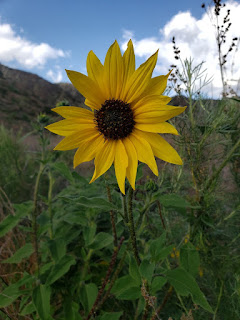 Van Tassel Motorway starts down off of Encanto Parkway, but there's a horse property or horse leasee where the road starts, and I'm never sure where I'm allowed to park around there, so I've always started my hikes from the neighborhood. However, on the return of my first hike, I did return the other way, because I couldn't find my trail off the Motorway in the dark.

The Motorway is pretty steep and you gain altitude quickly. Some flowers are not uncommon in spring, even along the lower reaches. But it's been a pretty dry winte and spring, so not many flowers, this year. 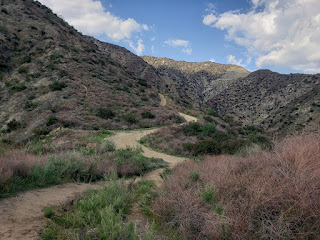 When Van Tassel Motorway starts decending, that's where you veer off, on a spur road, to the right. That takes you up to a ridge, which you follow, to Mt. Bliss's summit.

It's not a very prominent summit, but you get a pretty good view, all around. Straight shot over the Mt. San Antonio, for example. 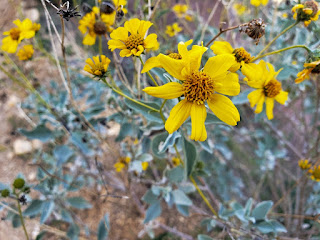 The last time I was up here, the summit was covered in tall grasses. This time, it was pretty barren, from that Bobcat Fire. 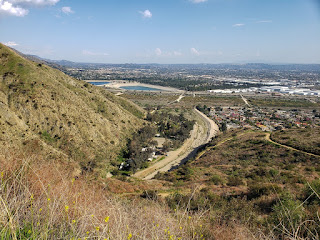 Somewhat hazy day, so the views were not as long as typical. I could only see as far as the Santa Ana Mountains, for example. No sign of San Jacinto or San Gorgonio. And, because of the setting sun, not very good clarity to the west, either. 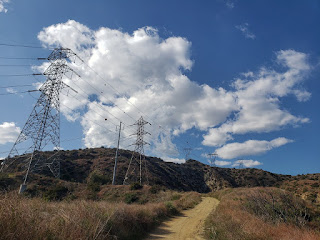 When I headed down, I made the mistake of taking the "first" trail I saw, which headed down. After probably a mile and half, however, this road just ended. So I had a pretty long and steep climb, almost all the way back to Mt. Bliss, before being able to head down the proper road. It's funny, but somewhat typical of me that I'll try to hike by memory, and not always recollect correctly. But I did manage to find the trailhead, at least! 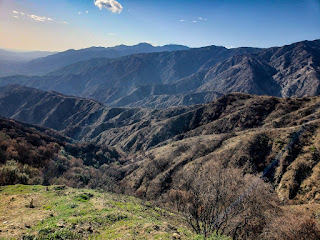 Because of my detour, it was pretty dark before I got to my car. Fortunately, there was the first quarter moon to help light my way. That's in addition to the bright city lights, of course. So as long as my trail was on the city-side of the hill, I actually needed to use my hand to shade myself from the city lights, or the glare was annoying. 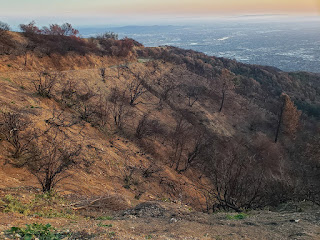 Got back to my car about 8:30pm. Wow, almost five hours of hiking! According to my AllTrails recording (which had a hiccup along the way), I walked at least 11 miles, and had almost 4,000 of elevation gain (gross, not net). My fitbit for the day gave me credit for over 34,000 steps and over 450 floors (for the day, not just for the hike). It felt really good to go on my first afternoon/evening hike of the season. 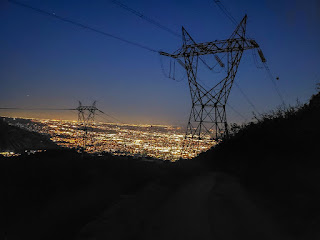 I have several more hikes to blog. I'm afraid I've fallen behind, again, despite my limited hiking opportunities. Hope to get them up, soon.
Posted by SkyHiker at 9:54 PM No comments:

Hiked Friday, March 5. I have a Valley of Fire hike from a few weeks before this but still need to go over pictures. This post contains only my phone camera shots, plus a panorama that google automagically stiched together for me.

This was a late afternoon hike, after I drove up from the LA area. The title may seem odd, because I've previously posted for Northshore Summit. This is different. But if you look at the third to the last photo on this post, you'll see where I went. 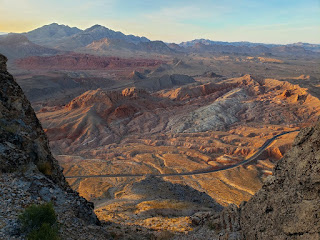 You can park in the same lot but rather than going up the obvious trail past the vault toilet, you go back down, cross Northshore Drive, and head towards the left (east) end of the impressive Northshore Peak. You achieve the ridge, then head along or behind the ridge, working your way west. Mostly a walk up, until the last few peaks.

I'm pretty sure I got to the peak right of the notch (not the rightmost peak). Hard to tell, as I turned around before heading up that short, steep bit, as I was running out of daylight. 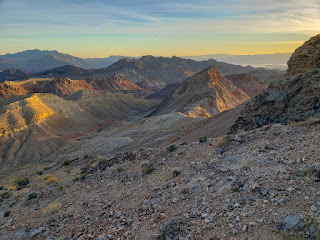 All of the pictures except the last were taken from the ridgeline. The panorama at top is looking east and northeast, towards Lake Mead. The second is from the second-to-last saddle I got to, shooting north. The top left of that photo is looking towards the east section of Bowl of Fire, which I also recent hiked. The ridge you walk along to for Northshore Summit is at the right. The next shot is looking more or less southeast, I think. Lake Mead is that way, too. 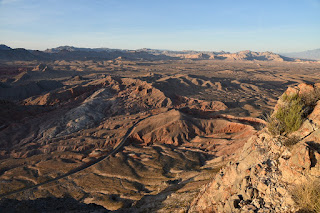 The next shot is looking a bit further east than the previous shots. The parking area for Northshore Summit is about 60 percent of the way from left to right, at the center, vertically. On the original (on my computer), I can zoom in and see the parking lot, then see the trail, heading atop the low ridge, into the shadow of the higher ridge, then along that higher ridge, to the summit, and beyond. From this angle I can see what AllTrails probably meant me to take to get to Bowl of Fire, although I can also see the ridgeline I took instead. 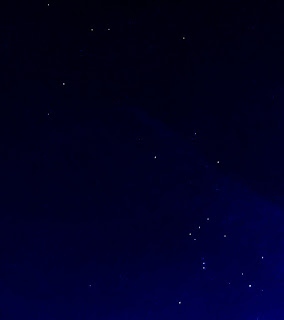 The last shot gives you an idea of how dark it was before I got back. Means I definitely turned around at the right time, because I made it off the steep section with light to spare, but then had to walk the last 3/4 of a mile or so in late twilight. Couldn't see very well, but the lower section is sort of cross-country, anyway, and there are no dropoffs or even significant rocks to trip over. Just need to avoid the creosote bushes.

Set the ISO to 6400, opened my zoom up to f/4, 24mm, for 1/2 second. Tilted the camera back, with one edge resting on the car roof, and tried to hold still. Orion is visible pretty easily, which I guess is all I figured I could get, under the circumstances.

Only about 2.5 miles for the day, with about 900 feet of elevation gain. Short, but somewhat slow going, as there was a fair amount of picking and choosing and backtracking, trying to find the easier route up and down the ridge. Pretty spectacular views from the top, though. I'll likely return when I have a bit more daylight, to reach the official summit.
Posted by SkyHiker at 6:35 PM 2 comments: