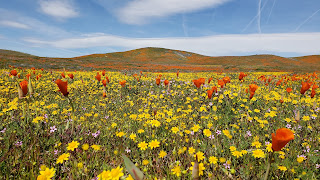 Couple of cell phone shots from a visit to the Antelope Valley California Poppy Reserve. Came about 9:30am. Since it was relatively early, on a workday, and before the park had arrived on social media radar, I was able to park in the park. When I left, they were encouraging people to park on the road, south of the park. Long backup coming from the east. 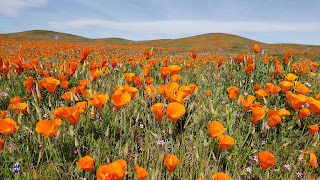 Having read that the bloom was starting from the east, and knowing that the rising sun would warm the poppies facing southeast, first, I walked that trail. Limited time due to work obligations, so no time to see it all.

It was pretty cold that morning, and the poppies didn't unfurl until about 11am. Lots of buds visible in these shots, so you can see that peak was a bit in the future. But pretty nice, already. Not sure if I will try to squeeze in a return in a few weeks.
Posted by SkyHiker at 12:30 AM No comments: 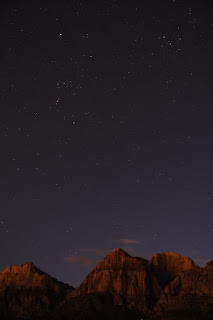 I have a few wildflower hikes to post, still, but this one should be faster. I drove up into the Las Vegas area on a Saturday. I had previously checked sunset times and the hours the scenic drive in Red Rock was open. I had been wanting to get some night sky shots of the area for a while, but was stymied by the limited road hours. They really don't want you here after dark!

But it turns out, based upon the changing sunset times and shifting road hours, there are a few windows of opportunity to legally be on the road when the sky is significantly dark. The first window I was aware of was in early March. On March 1, the road hours extend from 5pm winter hours to 7pm. If you visit before the change to daylight savings time, you have (by March 8) over one hour after sunset to get out off the road. 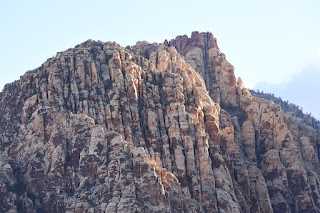 Took about a dozen shots, mostly relatively short exposures. The sky is far from dark, so a fast lens and long exposure would blow out the sky. 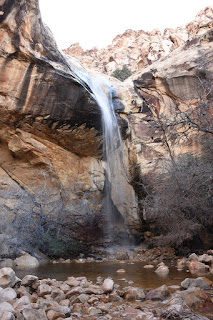 Earlier in the afternoon. I had intended to hike Icebox Canyon. I figured with all the recent rains, it would be impressive. But I forgot to assure a pair of socks to go with my hiking boots. Given all the rock hopping, I definitely wanted my boots. But I wasn't willing to use the boots with no socks. 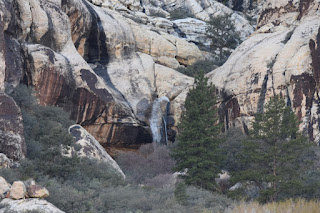 With either flip-flops or sockless athletic shoes, I chose the latter. With that set up, I was willing to walk from the Icebox Canyon trailhead, back up the one-way road, then along the stub road, then the short and easy trail to Lost Canyon waterfall. 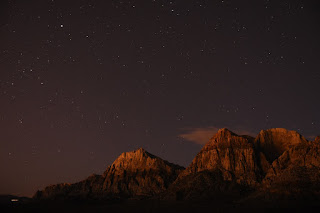 Round trip walk was probably about 2 miles. 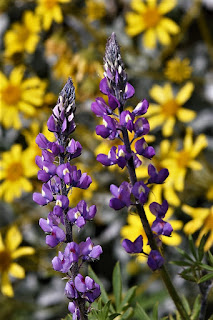 I visited the southern extreme of Joshua Tree National Park on Sunday, February 24. I had been following DesertUSA's Desert Wildflower Alerts, and saw that the area around the Bajada Trail was in bloom. (Note that this will take you to the then-current report, not to what I was reading a few weeks ago).

I had hiked this area on several previous occasions, including at least once when it was in bloom, but I can't find a post with photos of those earlier trips on my blog. Oh, well. 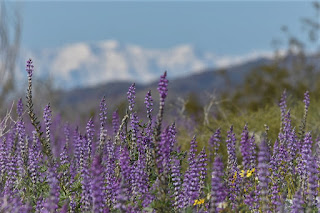 Although the Lost Oasis hike was a lot longer, the "real" point of this trip was to see wildflowers, so most of my photos are from the very short saunter around the Bajada Trail. 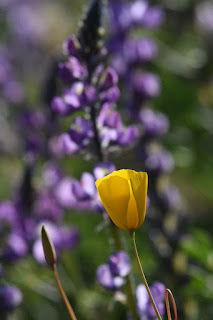 Even down in the Coachella Valley, wildflowers were blooming along the freeway median and in adjacent areas, so I was optimistic for some nice blooms "up" at the Bajada. And I was not disappointed. The area was blue with lupine, with plenty of brittlebush mixed in, a lesser but non-trivial amounts of desert poppy and other flowers.

Off in the distance, to the west, the snow dipped low on Mount San Gorgonio, and vicinity. I tried to frame a few shots of the lupine with the snow-capped mountains in the distance. 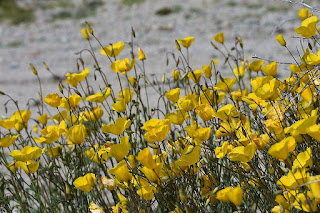 There were some painted lady butterflies fluttering about, but I didn't get any to pose. I did get one, by accident, wen I was photographing a patch of desert dandelion. 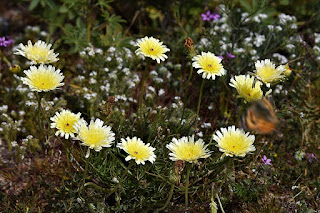 From the Bajada, the road heads to higher altitude as you head deeper into the park. Blooms were still numerous, but not as dense as further down, where the previous pictures were taken. I didn't stop again until the Cottonwood Visitor Center. 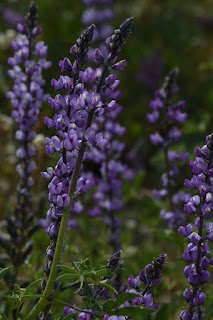 I wasn't sure if I was going to hike, because I had forgotten my medication that I should have taken around 9am that morning. Eventually, I decided it would be best to take a longish hike to try to control my blood sugar, that way, as it would still have been a pretty long drive home to get my medication.

The other factor that tipped my decision making was that I ran into a middle-aged gentleman at the Bajada (I say middle-aged now, because I'm old; if I ran into him thirty years ago, he would have been "some old guy"!). Jim was a commercial driver, who parked his mobile home/rig down outside the park, as there's a sign on the way up that says no commercial vehicles are allowed in the park. 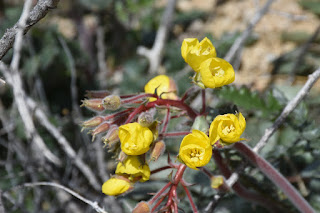 As I was still debating if I would hike, I told him, no problem, I'd take him to the visitor center, and reassess from there.

Once at the visitor center, I decided to do a hike, though I still wasn't sure which one. So then I drove the mile or so to the Cottonwood Springs trailhead, and, eventually decided on Lost Palms Oasis, since I had just been to Mastodon Peak the previous fall. 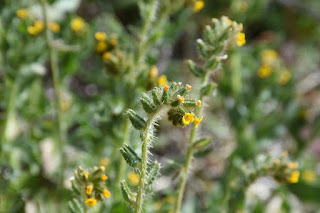 So not only did I take a decently long hike, but I had some company, along the way.

The distance from Cottonwood Springs to Lost Palms is probably 3.4 miles, each way, although there are dueling signs at the trailhead, and one claims it is 4.4 miles. 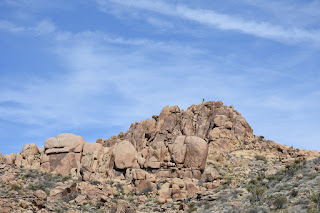 The hike turned out to be easier than I recalled, probably because it was somewhat warmer the last time I hiked it. On this day, I doubt it was much above 50. It was neither windy nor particularly dry, either. Perfect desert hiking weather. 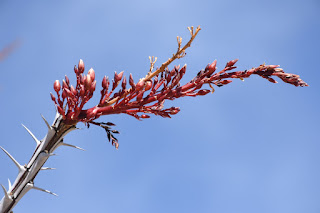 This was several days after the last storm, yet there was still the occasional small patch of snow on the ground. It was still getting pretty cold overnight, and not superhot in the day. And I guess they must have gotten decent accumulation. 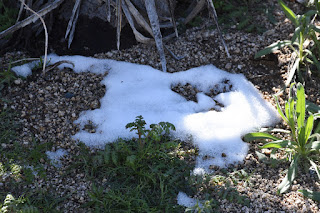 The trail itself is relatively flat. I mean, it goes up and it goes down, but only a few of the ups are steep enough to get your blood pumping. The steepest decent is at the end, when you drop down to the oasis. Numerous palms (the largest concentration, they say) are along the base of the ravine. Water seeps in various places. 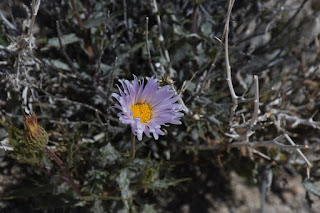 Take some care if you do decide to descend, since it does take some dexterity not to slip on your butt. Not a huge amount, and it does help if you have lug soles. 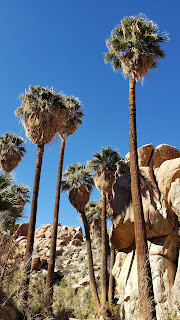 As noted, a nice hike. And, unlike on most of my hikes, I had company. It was a nice change of pace.

This last shot, by the way, was from the rest area on eastbound I-10, near Whitewater, and just before U.S. 62. Nice view of Mount San Jacinto, which was also snow covered.