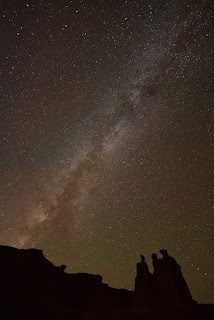 Well after getting back from my car, I headed over to Park Avenue, intending to reconnoiter some in preparation for possible night sky shots, later that evening. However, I wound up chatting with an older couple, and got nearly nowhere. But I did take a few shots. Most were terrible because I had used my 20mm lens a few days ago for night shots, which meant I turned off the autofocus and didn't notice that until I had taken a number of shots.

I then went back to my motel room in Moab to eat dinner. I microwaved some store-bought fried chicken and ate a few boiled eggs, and an apple and a banana. I watched some television and waited to see if the clouds would clear. When it finally began to clear, I drove back into Arches and parked at the Courthouse Towers lot. Some people were already set up there, taking some shots and painting various rock outcroppings. I gathered my equipment and crossed over into Park Avenue. 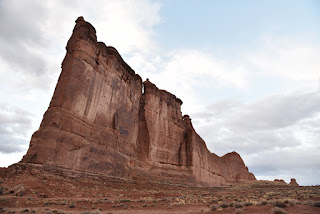 I just went far enough to get away from the road lights, and took a whole slew of shots. Little did I know at the time that this would be my only successful night sky shots of the trip. The next two nights were wetter and/or cloudier than this night, which was mostly clear. I was pretty happy with a few of the shots, at least. 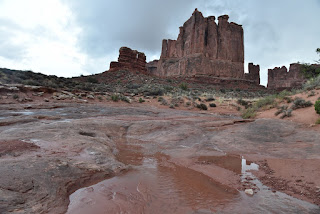 Went back to the motel, slept, got up the next day, ate a hearty early breakfast, then drove back a third time into Arches. The plan here was to get some hiking and photography around the Windows section of Arches, then get back to the motel, pack up, and head over to Canyonlands and Deadhorse Point State Park. That'll be my next post, I hope! 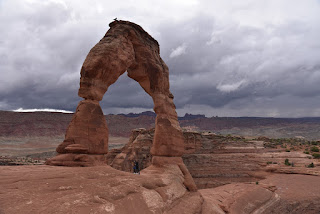 Spent several days in eastern Utah around the Columbus Day holiday. Sunday, October 7 was my first day there, after having spent the previous night in Cedar City. It's really too far to get to Arches in one day, so I did a stop over. 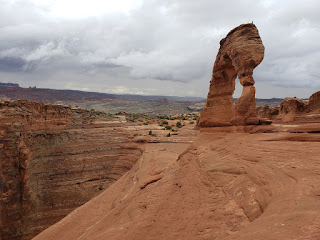 My initial plan had me staying in Capitol Reef National Park on this night, but the forecast looked very poor: Rain all day, so I'd be driving a narrow mountain road in clouds and rain, then have to either pitch my tent in the rain or sleep in my car, which sounded pretty crummy.

So, instead, I burned 15,000 Wyndham Rewards points for a free night in the Days Inn in Moab. Rooms are expensive in Moab, and the cash price would have been over $150, so this seemed like a good time to use points, instead. And, in fact, it was raining when I got there. But the rain eventually stopped, and I managed to get a hike up to Delicate Arch.

It's a relatively straightforward 3-mile roundtrip with a decent altitude climb to get there. NPS says 470 feet.

Starts out level, and walking over sand. An old ranch house is near the start. You cross over an area undergoing rehabilitation (removal of tamarask trees and regrading of the wash), then begin to climb. After a short climb and descent over dirt, you soon begin the main part of the climb, over exposed sandstone.

It's the exposure that makes this a strenuous climb in the heat of summer. There's no shade, it's pretty steep, and there's no shade. But it's not particularly dangerous, otherwise.

The trail levels off again at the top of the sandstone. You're in a wash, again. Some gnarled juniper trees grow here. Then, up along some more sandstone, pass two smallish arches in that sandstone, and you're at the opening of the amphitheater. Delicate Arch, likely larger than you expected, is before you.

Unfortunately, there's likely a continuous line of people, posing under the arch, because God-forbid you can't all just appreciate this from a distance from a distance. Only way around this is to shoot the arch from the opposite side, or wait until really late, and hope not many other people get the same idea. 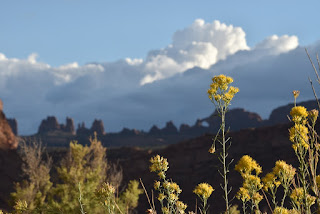 On my return to the car, a partial-rainbow spread, from the passing showers. It was a pretty cool end to my little hike, though not the end of my photography for the day.

Posted by SkyHiker at 2:09 PM No comments:

Hiked Saturday, September 8. Heavy rains in mid-July caused severe erosion on several roads and trails in Zion National Park. When I visited, the trail to Angel's Landing was closed. I hiked that trail last year, and also about 20 years previous, so I wasn't planning to do that one, anyway. However, what that meant was that anyone seeking a seriously long hike out of Zion Canyon was going to have to go up Observation Point. Additionally, the detour to Hidden Canyon was also closed. I'm pretty sure that meant much more people than usual heading up to Observation Point.

Not long after that long-ago trip up Angel's Landing, I had previously been up to Observation Point. But that was long before I had a digital camera. Not sure where my photos from that trip are, now. Nonetheless, having gotten up this morning and feeling up for a serious hike, I opted for Observation Point.

This was on a Saturday. I unexpectedly managed to get a campsite at Watchman just a few days in advanced, so it was somewhat spur of the moment. BTW, this stay was in the C-loop. Tents only. What I discovered there is that seemingly everyone in the tent area wants to burn a campfire so I was annoyingly over-smoked the night before. Also, everyone in a tent needs to use the restrooms, so those are almost always occupied. On my previous stay, I was in the A-loop, which permits both tents and campers/rvs. For an extra ten dollars, you get an electrical outlet (which I didn't really need, but which you might want to use to charge your phone or laptop) and a restroom that was little-used, because all the camper and RV people use their own restroom. I've decided it's probably worth the extra ten bucks to camp there.

So I woke up, ate breakfast, packed up the tent, and drove from my campsite to the day-parking area (because I was leaving after my hike). Then I took the mandatory shuttle bus from the visitor center to the Weeping Rock shuttle stop. From there, there are two trailheads. One is for the short trail to Weeping Rock, while the other is for the longer trail, to Observation Point. I took the latter.

This trail starts out steep, because you need to climb out of Zion Canyon. It's basically one switchback after another. You look up and seek these sheer red-washed rock cliffs, above you. I.'d estimate a mile or so of that, before you level off into a side slot canyon. Because you're heading up the east side of the Canyon, you'll be in shade in the morning, the whole way up. 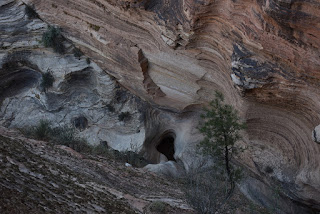 The relatively level section seems way to short, but the slot canyon you're walking along is quite impressive. The views down into the Canyon are similarly impressive. There were scattered wildflowers along most of the trail so far, even in early September. 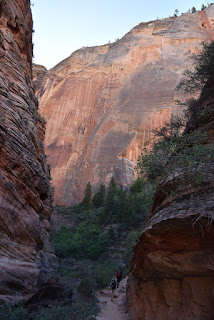 More climbing follows the slot canyon, but now you're walking over exposed granite. Then more switchbacks. This last slog is tougher, because now you're somewhat exposed to the south, and the sun's catching you. Later, you'll discover why you're so exposed: The trail is just blasted into the rock. No shade.

Finally, you level off, and it's a largely-flat, 3/4 of a mile or so. Again, outstanding, wide open views over the main Canyon, and also to the East, in spots. If you didn't already know, you'll discover yourself way above Angel's Landing, further down canyon. 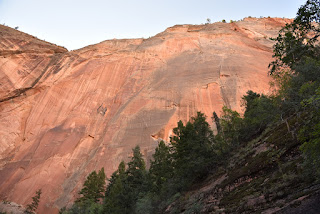 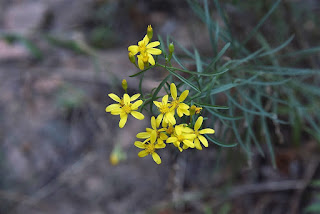 Since I am not hiking as much as I have in the past, I found this hike more difficult than I remembered it, and I'm pretty sure the last time, we included a detour into Hidden Canyon, which was not possible, this time. Then again, I'm 20 years older! 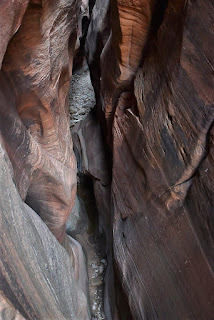 I had semi-forgotten the slot canyons along the way to Observation Point, and that shaded section can be a welcome break, especially if you started late, or it's midsummer.

Made it back fine, and drove on down to the Las Vegas area. Easy 2 1/2 hours or so. Still, I'm looking forward to the scheduled opening of a couple of more truck stops between Saint George and the Mesquite area. As it is, if I take a restroom break in St. George, it's still a little long to drive all the way to Las Vegas without another stop. So I usually stop either at one of the casinos or at the kind-of-rundown-looking gas station near one of the easily-accessible casinos. I prefer the regular truck stops (Pilot and Flying J, in particular). 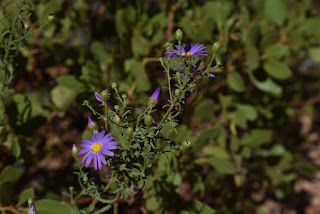 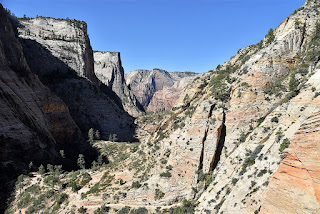 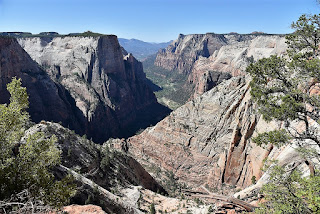 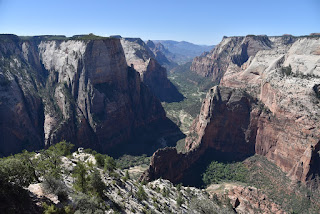 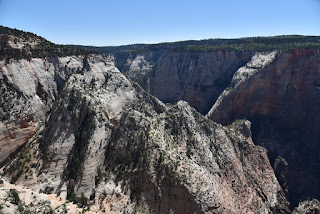 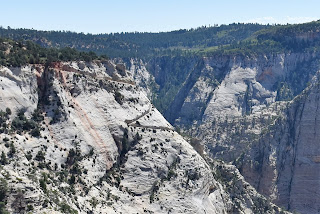 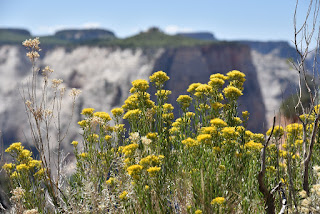 Posted by SkyHiker at 9:53 AM No comments: