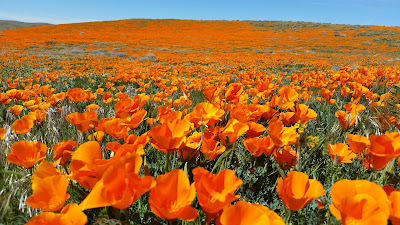 A combination of my medical condition and the various family obligations I have had over the past few months have essentially eliminated my hiking opportunities. I'm figuring maybe in late-May, I'll be starting a more regular regimen of hiking.

Other than the occasional walk around developed parks or Griffith Park, this was my last adventure. It was late March, and the poppies were blooming nicely. They were extremely thick in some areas of the Reserve, but spotty or non-existent in others. For this shot, I used my phone's camera. I had recently read an article in Outdoor Photographer about how ultra wide lenses were best for immersing yourself into the scene: Get low and right into the action. So this, I did. I was very happy with the result.
Posted by SkyHiker at 2:38 PM No comments: 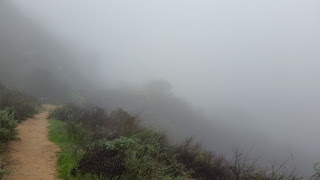 Hike Monday, February 20. As I type this, I'm sitting at a PC in the waiting area of Toyota of Pasadena. Basically, the only time I both have a plethora of free time and access to my blog is when I'm waiting for my car to be serviced. Unfortunately, I had not yet uploaded any other hike photos besides this one, so this is the only one I can write about, today. 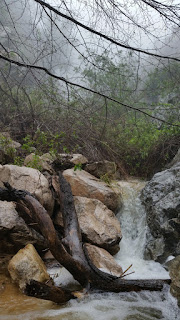 It's basically the same hike as the last one I posted, except cloudier. On that day, in fact, it was so cloudy that I decided it would not be worth it to continue to the Thalehaha Falls overlook, because I wasn't sure if the visibility would extend even from the overlook to the falls.

The shot below, of Ribbon Rock and Moss Grotto falls, shows that idea. No, I'm not using a fog filter. Yes, it was that foggy. So I turned around, there.

Ironically, by the time I got back to the trailhead, the fog was already lifting. Likely, I would have been able to see Thalehaha. Nonetheless, I turned around that day, and returned a bit later, as the previous post shows. 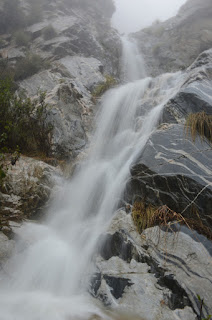 I like foggy days. It makes even familiar things look different, and the clouds just seem to absorb the sound, so it's quiet. This hike was no exception.

Yet, the hike was over, too soon. It's less than two miles, roundtrip. I wanted to do another hike. I'm not sure why, but, apparently (as I look over these pictures), I settled on Little Santa Anita Canyon. That's the trail that heads up to Mount Wilson. The whole thing is about eight miles each way. Haven't walked the length of that in a couple of years, now. Maybe this summer, again. 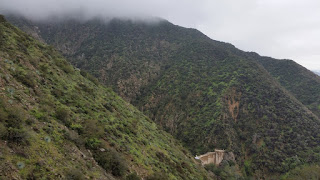 Of course, I had no intention of going that far, today. I was mostly just thinking of going to First Water. That's a roughly three mile roundtrip. There's a pretty good climb in altitude involved in that, because they had to reroute the trail a number of years ago. It goes high around a slide area, then descends back down, again.

On this day, they prospect of the gain just didn't appeal to me. Also, I got diverted by a thought. 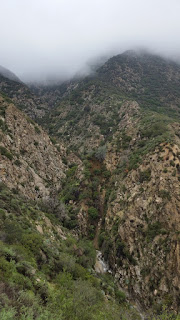 I've probably hiked this trail dozens of time. On days when the water is running high, you can see several waterfalls down in Little Santa Anita Canyon. I wondered if there was a reasonable way down there.

I also noticed that there's a little bit of a "peninsula" that drops down from the main trail, shortly after passing the dam. There's a use trail that follows down there, but I had never walked it, before. On this day, I finally did.

I followed the trail along the ridge of the peninsula, to its end. By the time I got to what seemed to be the last dropoff, I was only about fifty feet above the canyon, maybe less. But, from there, the drop looked steep. I didn't have the motivation to try to make it down there, concerned about maybe slipping and not being able to get back up. But it was a fun diversion. 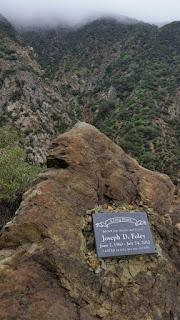 Obviously, I was not the first person to come this way. In fact, there's actually a little memorial plaque along the way.

After I got back home (following my hike), I goggled the name on the plaque, and got a hit on "Find a Grave." The description of the plaque's location didn't really align with reality, but perhaps that was their intent. 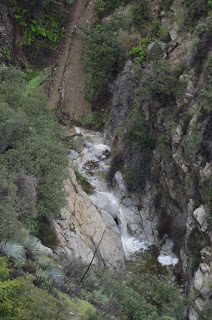 The rest of these shots are from that hike, on the way out to the end of the point, and back to the trailhead. Roughly five miles for the entire day's hiking. About three miles for my Little Santa Anita Canyon section.

One of these days, I may try going further down, but probably not. As I get older, I get less willing to take actual risks on my hikes. I know I'm not going to get a life-changing photo out of the effort, so I don't want to risk a life changing fall! 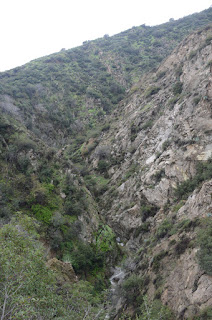 I would also like to be able to walk upstream from canyon-bottom level, from the dam on up. But I don't think that's possible.

I've got a disturbing number of hikes I haven't blogged this year. I thought, given my slower hiking pace, I'd be doing better. But my work schedule and other obligations are keeping me from having the time to resize and upload photos, then actually do the write-ups.

I do have a picture from the Antelope Valley Poppy Reserve, one of my more recent hikes. It was a pretty good year out there this year, but the bloom is now largely over. Still, I hope to be able to share some of those hikes, with you. Hopefully, soon. 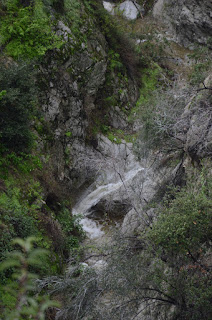 Overall, the last few months have been inconvenient, but not as bad as feared. The oral chemo I've been on has made me ridiculously sensitive to sunlight, so I am really leery about hiking in the sun. Even with a floppy hat and long sleeved shirts, my skin can get "burned" and "splotched," right through the shirt. The skin peels around my nose and forehead, despite spf 30 and the floppy hat. So as the days get longer and the sun gets higher during the day, I've been hiking less and less.

The pills also have an unpredictable effect on my bowel movements, which makes me reluctant to hike where I don't have a good alternative for relieving myself. That's limited my hiking a great deal. Nonetheless, the side effects overall have not been too bad. I still have plenty of hair on my head, and I haven't vomited even once. I did experience nausea and stomach discomfort a few times, but, compared to what others experience, especially those on intravenous, I have nothing to complain about. 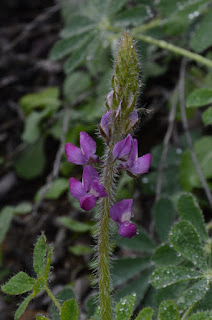 I start my final round next Thursday. A few weeks after that is the Mojave National Preserve Star Party. Not sure if I'll try hiking or not on that trip, but I certainly do hope so.

June is the Grand Canyon Star Party. I hope to spend the first few days of that on the North Rim. I went last year (just for one night), and had a blast. But it was a heck of a long drive home. So, this year, I'm hoping to enjoy two nights on the Rim, and stop in Las Vegas on the way home. That'll break the drive up, nicely. Anyway, that's my late spring plan. We'll see how this plays out.

Posted by SkyHiker at 8:34 AM No comments: