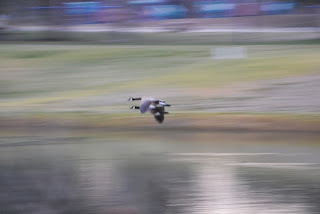 Hiked Monday, January 27. Guess I'll be posting backwards for a while. This was my third hike of the year. It was an after-work thing, so I had little time before the sun set and I completely lost my light. 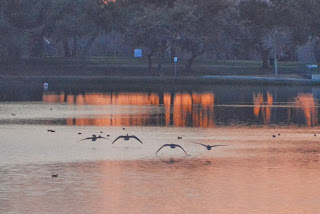 Most locals referred to this entire developed area as "Legg Lake" (or, if you're a kid, "Lake Lake"), but Legg Lake is actually only the southernmost of three small man-made lakes in the midst of the Whittier Narrows Recreation Area. 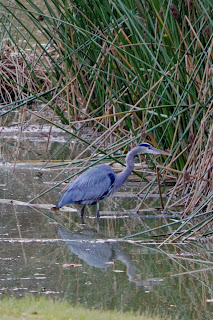 The Whittier Narrows itself is the relatively narrow passage between the Montebello Hills (to the west) and the Puente, Hacienda, or Whittier Hills (to the east). Both the Rio Hondo and the San Gabriel River must pass through this area. In pre-modern days, the rivers frequently switched beds, washing back and forth over the narrows. In more modern days, both rivers are nearly entirely encased in concrete. An exception is the short segment of the Rio Hondo that passes just north and south of the Pomona Freeway (CA-60), right near Legg Lake. 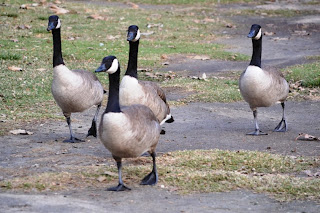 Despite the proximity, these lakes are not river impound-ments, nor even formal settling basins for this rare bit of water in an arid country. But the area is owned by the Army Corps of Engineers, and, were the twin rivers ever to really flood like in the days of old, this entire area would certainly be one of the places inundated with water. 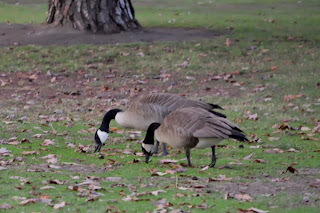 But, until that happens, Legg Lake is just a really nice place to take a walk in the morning or evening. Numerous dirt, asphalt, or concrete trails crisscross the area and circumnavigate the collection of lakes. Within the lakes are numerous large islands that provide a safe haven for migrating and non-migratory waterfowl. 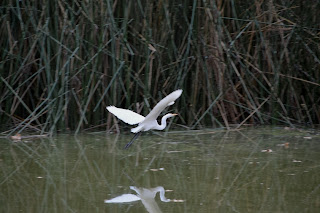 If I were an expert avian expert, I could tell you all the birds I saw. Instead, all I can say is that there were a lot. Definitely plenty of Canada geese, and numerous heron and egret. LOTS of ducks, geese and coots.

I walked and photographed for somewhat over an hour, so I'll call it a 3 mile walk Not sure what the actual distance around each of the lakes would be.

This is definitely no wilderness trip. The Pomona Freeway roars to the north. Rosemead Blvd (CA-19) hums to the west. Santa Anita Avenue is on your east. Durfee Road is to the south. The grass is manicured. But the islands and lakes do attract the aforementioned waterfowl, and they provide lots of free entertainment. :D 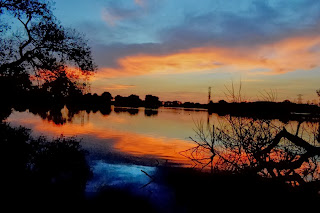 This area is also linked to other bicycle and hiking trails along the Rio Hondo and San Gabriel Rivers, so the possibilities are pretty endless if you wanted to extend your hike or ride. For me, with the darkness falling, three miles was all I had time for.
Posted by SkyHiker at 11:18 PM No comments: 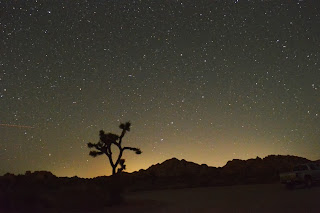 After a short day of hiking in Joshua Tree (due to a late start, due to having errands to run in town), I set up my telescope for some observing. I also brought my "good" tripod so I could take some sky shots. I set up at the Boy Scout Trailhead, where overnight parking (but not formal camping) is permitted. In other words, it's the sort of place the Park Service would like astronomy-types to set up their telescopes. 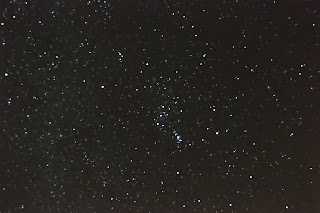 This site is in the northern and somewhat western part of the park, so there's a couple of very visible light domes. To the north-northeast (where the first picture is centered on the rising bowl of the Big Dipper), the light dome from 29 Palms illuminates the horizon. 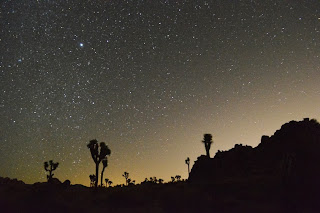 The second shot looks high at Orion, which is now pretty much due south (but high) by the time the sky gets serious dark. The third shot is looking due south, below Orion. Sirius is the bright star in that shot. This light dome is from Indio. 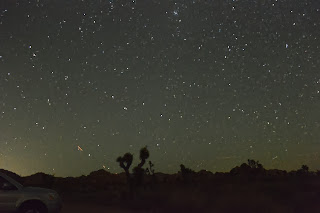 Fourth shot here is to the east-northeast, with the head of Leo rising over the Joshua tree. 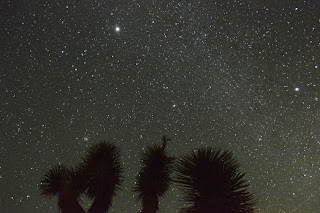 This shot looks to the east, with Jupiter the bright object to the left-center-top, and Sirius the brightish star to the right. 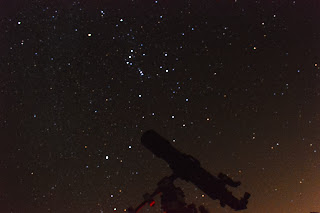 Finally, a fuzzy shot of my telescope, silhouetted against Orion.

I took all or nearly all but the last one posted at ISO 6400, aperture around 5.6, and exposures of between 20 and 30 seconds. Even at 30 seconds, the stars start to trail a little bit.

This was a pretty nice finish to a short day of hiking (which I still need to blog about). Before I took my pictures, I looked at Jupiter and a couple of easy deep sky objects through the telescope with some rock climbers who flew out from Michigan for a long weekend. It's always fun sharing the sky, and of course, they were just happy to be where the temperatures were on the north side of zero!

I also spied the supernova in galaxy M82, which was a pretty easy sight, but appeared dimmer than estimates have been reporting.

I still need to blog my actual hike from yesterday, and maybe the Santa Fe Dam outreach event. With any luck, I'll get another hike in later today, too. A late start to my latest year of hiking, but still a lot of fun to get away from town for a little while.
Posted by SkyHiker at 10:44 AM 2 comments: 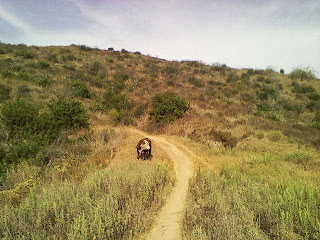 Well, 2014 is getting off to a very slow, non-hiking start. As I look at my work schedule, I may not be hitting the trail for another week. That's really sad. And annoying.

So, in the meantime, I finally got around to downloading some photos from my cell phone that I took back in August 2012. It was from a hike in Chino Hills State Park, where I forgot my camera. My phone battery was also nearly discharged, so I managed all of about six shots before it died. 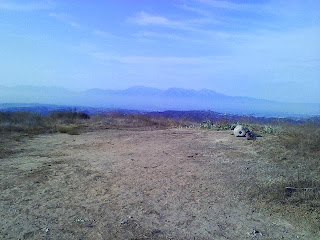 I've also inserted these photos into that old post, and took out the references to having no photos from that hike. There are some pictures, though not necessarily very good ones. 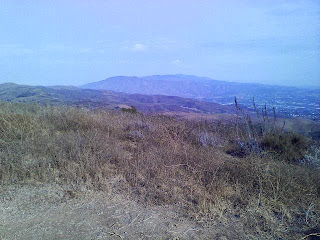 The main entertainment from that hike was the large cow I ran into, and the large tarantula I ran into. Yeah, the cow was much larger than the tarantula. And, in fact, it was also scarier, because it's not like a tarantula can run you over if he gets pissed at you.

Chino Hills cows have built up a bit of a reputation for being ornery. Look it up. 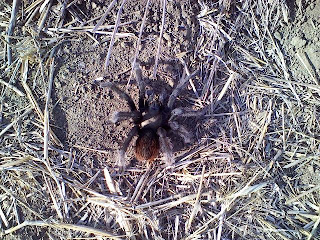 Tarantulas, meanwhile, are usually known to be pretty sedate. I'm more scared when I see a lot of tarantula hawks flying around, on the assumption that their sting must undoubtedly hurt a lot. Haven't ever had to feel the sting, and I hope I never do.

In a day or two, I'll probably post some pictures from the Santa Fe Dam outreach event. It went pretty well, though the pictures there were probably less impressive than the ones from my phone 18 months ago!
Posted by SkyHiker at 12:08 AM No comments: 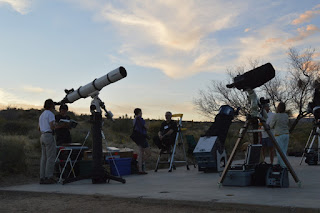 If the weather stays clear, I'm scheduled to join a friend at the Santa Fe Dam Nature Center for some "sidewalk astronomy." The featured bodies are the first quarter moon and Jupiter, which is right now at "opposition" (meaning it's as close to earth as it'll get this year).

After everyone's had a good look at our featured objects, we may try hitting a few other targets. Obviously, the Orion Nebula is very well placed for viewing. Maybe the Pleiades star cluster, and maybe a few other showpiece objects. Haven't really sat down and tried to make an observing plan.

No matter what, however, if the seeing's good (no clouds, not too much turbulence), the view of the moon and Jupiter ought to be about as good a view as you'll ever see.

Meanwhile, if you're there at the start, before the sun's gone down, I may try to setting up my solar observing equipment, as well. It partially depends on how good I am at packing stuff in my car on Saturday afternoon!

That picture, by the way, is from a trip to the Mojave Preserve. I'm not sure which telescopes I'll bring to Santa Fe Dam. I'm leaning towards a large refractor, not quite as large as the one on the left in the picture. May bring a second, smaller refractor, too. I'd kind of like to bring my large SCT, but I don't think both would fit in my car at the same time.
Posted by SkyHiker at 9:13 PM 4 comments: