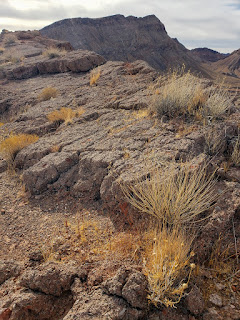 Hiked Saturday, January 23. Having explored sections of the Bowl of Fire on my two previous hikes, today was supposed to be a longer hike, approaching from the Northshore Summit trail.

I had hiked the short Northshore Summit trail several times before. Most recently was last October, but I have been up there at least twice, previously. Can't find my older posts, though, so maybe I never blogged it? Odd.

Northshore Summit trailhead is one of the few formal hiking trailheads indicated on the Lake Mead hiking handouts. A link to the recreation area's designated hiking areas is here.. 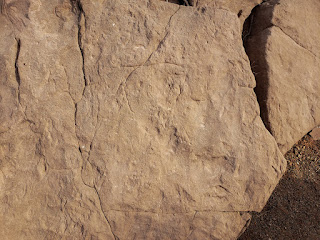 The "official" (NPS) hike from this trailhead is a short one, just to the top of a bluff that's north of Northshore Drive. Great view from there, though. However, even on my first hike there, I noted a trail crossing the desert, far below. Figured that one day I would investigate that, though I had no idea what I might see. 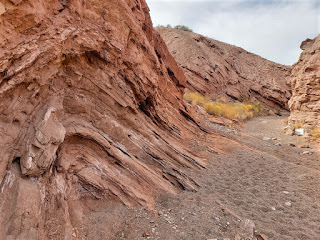 Turns out the "what I would see" was a lot more spectacular than I would have imagined.

From the top of the bluff, the trail continues another 1/4 mile or so, running along the edge of a steep dropoff. Portions of Bowl of Fire are visible to the north and northwest. Relatively flat alluvial plains stretch to the north and northeast, with that plain crisscrossed by flood gullies and washes of varying widths. 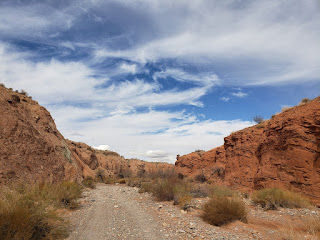 The ridge itself descends just a bit as it curves to the northeast. From that northeast end, a well-defined use trail made its way, yes, somewhat steeply in parts, but not dangerously steep, nor dangerously exposed, down into the alluvial plain, below. I followed the trail that way.

Note, by contrast, my AllTrails app indicates a turn left to stay on the "trail" some distance before that. I did not see a more apparent trail before "mine," however, so I don't know if the indicated trail has since been eroded away, or if the "trail" is just a sort of "suggested direction" thing that was drawn from above, but not actually walked. If the trail is still in use, it must require a pretty steep drop to get to. 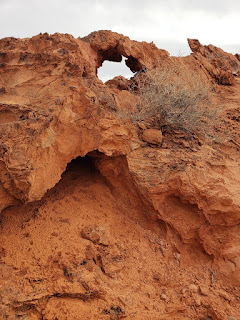 After a relatively brief section of steepness, my trail eased its way along the edge of a small wash, before eventually dropping down into the bottom of that ravine. There was a small pile and line of rocks at the intersection, so, on the return trip, the point to leave the wash was easy to see.

After a spell, this wash ran into another, wider wash, and another small duck of rocks. I made a left, there. 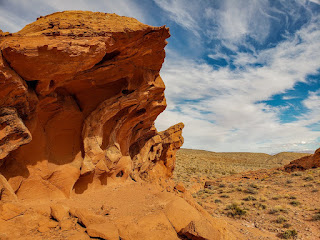 More weaving within the wash, until a wide wash inflow came in from the right. A stack of rocks there indicated another turn, so I headed up this other wash leg. Stayed in this broad wash for nearly a mile, until I saw a narrow canyon, heading in from the left. I saw a marker some distance up this side canyon, so I thought this might be the way to go. In retrospect, looking at my completed AllTrails recording, I "should" have stayed in the main channel. Nonetheless, both paths would eventually lead to where I was heading. 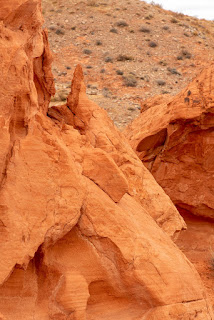 The marker in this side canyon told me I was crossing over into a Wilderness Area. So, apparently, the main wash (also a jeep trail) runs along the Wilderness boundary.

My side canyon "ended" at a dry falls. It would have taken some skill to scale the actual drop. But, just a few yards before the falls, ways out of the canyon were easy to manage. As always, I attempted to stay on either sand or hard rock as I climbed out and about. Didn't want to damage any cryptobiotic soil, nor the plants, strugging to grow in small patches of soil among the sandstone. 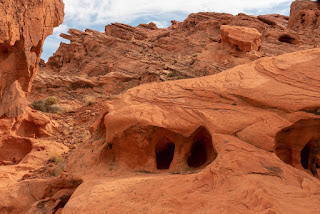 It's a wonderland of rocks here, similar to what I saw on my hike to the middle-western section Bowl of Fire. As the previous day, then, my horizontal progress slowed to a stop, as I explored the eroded sandstone around me. Lots of zigzagging, again, trying to minimize my impact on the land before me, but also to position myself for lots of picture-taking. 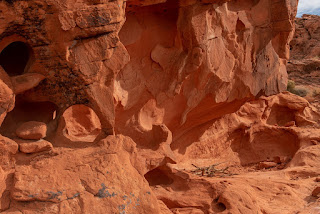 After an hour or so, while covering only about 1/2 mile of horizontal distance (lots of picture taking), I was starting to feel a little tired, too tired to keep looking for low-impact routes onward. Also, a fair distance to return awaited, and I knew it would end with a pretty substantial climb out of the washes and up to Northshore Summit. Didn't want to be too tired heading backout, as that would increase my chances of slipping. 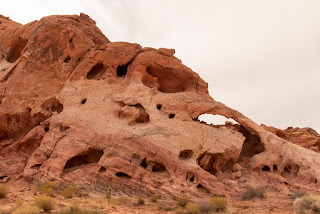 So I retraced my steps, seeing familar waypoints along the way, and adding them to my AllTrails recording.

Incidentally, this time, I not only brought an external "spare" battery to recharge my phone, but I also brought a cord to plug it in! This let me record on AllTrails for the entire trip. On several previous trips, concern over draining my phone battery too quickly meant I only recorded the return leg. I will need to make a spare battery a regular part of my hiking gear. 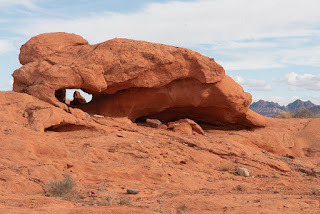 As another aside, the second photo on this post? I thought it looked like the same sort of stone that held ancient footprints on previous trips. I have no idea if I'm seeing actual footprints here, or just some semi-regular, pecurliar erosion marks. But I took a photo, just in case. 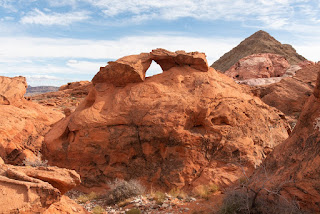 As with all of my Blogspot posts, clicking on the photos in the posts produces a much large version of the picture to view. Much more detail to be seen, that way. 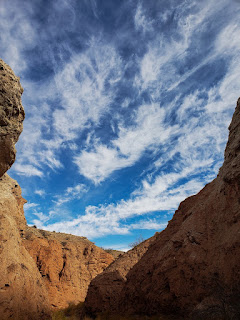 According to AllTrails, my entire hike was 7.15 miles, with an elevation gain of 846 feet. I didn't venture far beyond the start of the red sandstone start of the Bowl of Fire. Had I gone another 1/2 mile or so further west, I'd have (in theory) crossed my January 10 hike. Two miles past that would have reached my hike from the previous day.

Northshore Summit trailhead has an actual parking area, and a vault toilet. That's in contrast to the Mile 18.2 trailhead used on the previous two hikes into Bowl of Fire, which had neither. 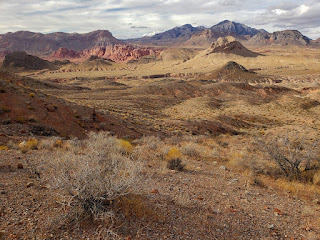 As I think I mentioned in a previous post, I had never even heard of "Bowl of Fire" until a few weeks ago. Since then, I've been seeing lots of posts about it on the Explorers of the Mojave Desert Facebook page. Not sure if it's become more widely known, or if I just never noticed those posts before I knew where it was. Either way, some pretty dramatic scenery, and a bit off the beaten path. On this hike, I didn't see any other hikers, once I got away from the trailhead. For four hours of hiking, that's pretty amazing. So, no problem maintaining proper social distancing.

Still some pretty extensive areas of Bowl of Fire I didn't get to. May try more of a thru-hike next time, with less time photographing, just to get a sample of the rest of the area.
Posted by SkyHiker at 9:55 AM No comments: