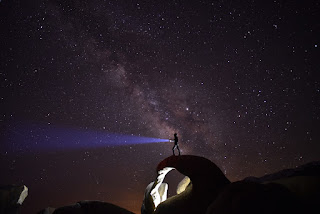 I visited the Alabama Hills for the first time last weekend. Drove up on Saturday afternoon, and stayed overnight, in Lone Pine. I'l try to get my afternoon hike pictures posted, soon. 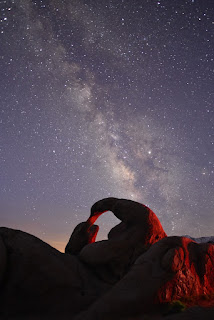 Woke up at about 3:45am, and drove back to Mobius Arch trailhead It's dark up there, so I managed to get myself turned around as I drove, and wound up taking a little longer than I should have. Still, it's a short hike to the arch, probably only about 1/4 from the left trail, and 1/2 mile from the right (the trail forms a loop, and approaches the arch regardless of which arch trail you follow. 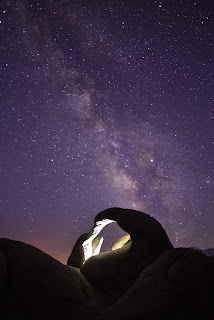 When I got there, there was already a group of three, there. They had a relatively bright "backlight," on the west side of the arch, a person posing atop the arch, and they were shooting from the west side. I waited until I was sure I would not disrupt a shot before approaching. Then I set up my camera behind them and took a few test shots, while waiting for them to finish. Ironically, one of the first test shots I took came out the most interesting: Just 15 seconds at ISO 1600, f/1.8 with my 20mm Nikon. 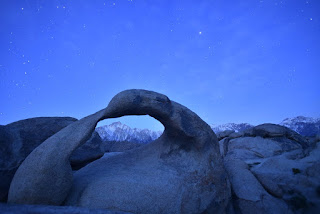 If it were up to me, I'd have shot under existing light, with a dark arch, but a longer exposure to catch more Milky Way. As it was, even at 10-15 seconds, the undersight of the arch was overexposed. Still, it was an interesting effect, and I did enjoy chatting with the other photographers. 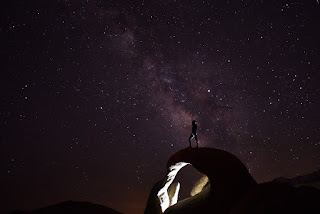 Dawn approached quickly, and even the first few shots showed a reddening to the west. By the time the first group wrapped things up, the Milky Way was fading.

Just before leaving, I took a few shots with the eastern Sierra showing through the arch. I had done that the previous afternoon, as well, of course. This one is just illuminated by the brightening sky, behind me. Sunrise was still probably an hour away, however. So I headed back to the room, to rest for a while, eat breakfast, and head back home.
Posted by SkyHiker at 9:54 PM No comments: