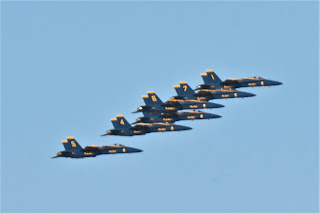 Some pictures from the past few months. Most of these shots were taken around Griffith Observatory. Turns out the last one was taken elsewhere. I'll try to get another post or two from my hikes over the past few months out this weekend, too.

On September 22, 2019, the Blue Angels announced an "orientation" flight over the Los Angeles area. The press release had them making a 20 minute flight over the basin, coming in from Ventura, flying over the San Fernando Valley, near Burbank Airport, then Dodger Stadium, Downtown Los Angeles, past Griffith Observatory and the Hollywood Sign, then down towards San Pedro and the U.S.S. Iowa, which is moored there.

The best lighting was when the flight was to the northeast of the Observatory, as this flight was early evening, with the sun to the west-southwest. When they were closest to us, they were backlit. But, when further away, you could at least see the proper color. This was with my Nikon D3400 and a 100-400 Sigma zoom, and some serious cropping 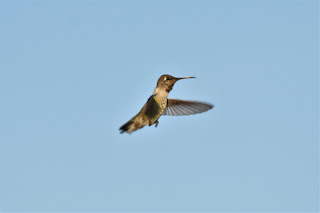 On September 24, before my shift, I hung out near the Astronomers Monument. A couple of hummingbirds were fighting over the right to sip from the red sage flowers planted around the monument. These shots were also significantly cropped. But I did get a few fun shots of a hovering hummingbird, so I'm pretty happy with that. 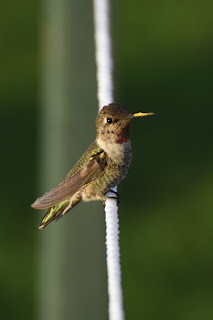 As with the Blue Angels, the sun was to the west or west-southwest, so I planted myself to the west, and got some well-lit shots of the bird.

They were really concentrating on each other, however, and didn't seem perturbed by people who got really close to them, with their cell phone cameras. Of course, with my zoom, I could give them plenty of room for my shots, though I still needed to crop. 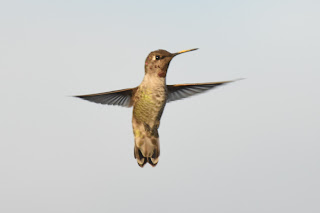 It was also tricky because of their unpredictable zig-zags, so I didn't always have time to let my camera focus, and they sometimes zoomed out of the field of view before I could trip my shutter. I also needed to fiddle with the camera settings during the shoot, to try to get a fast enough shutter speed to freeze the bird, and a high enough ISO to illuminate the subject.

I think this was the same camera and lens combination as my previous shots. 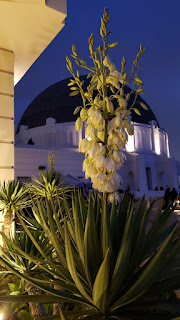 October 27, I was walking around the building. Not sure if this was during a break or before my shift. The sky was still not that dark. The lighting around the building is all designed to shine towards the building, so I needed to lean over a railing to get a shot with the yucca bloom illuminated from the front. I also wanted to get some of the planetarium dome, also illuminated, with some areas getting spot lit, and others just from the glow of the post-sunset sky, to the west. Just a cell phone shot, but I liked the look of this one. 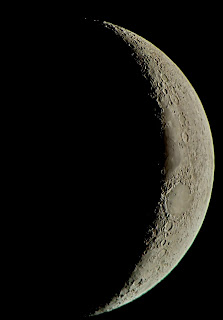 Looks to be an October 31 shot. Cell phone shot. I guess Halloween night is often slow at the Observatory, so I snapped a shot through one of the portable CPC 1100 that we set up on the sidewalks around the building. Some processing done on my phone, to get the right exposure and improve the contrast a bit.

November 12. Another lawn telescope shift that turned out to be pretty slow. Started out with scattered high clouds, which still allowed for fine moon viewing. 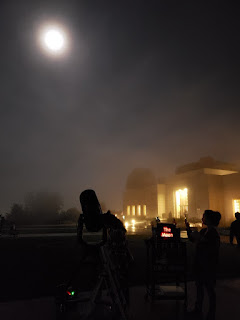 Later in the night, the fog rolled in, first settling in at about 1200 feet above sea level, which put us just under the top of the cloud deck, but with very little fog above us. That meant, even as we could hardly see the more distant parts of the building through the fog, the moon continued to shine brightly, so we continued with our moon viewing. A little bit later, the fog level dropped down to around 1100 feet, so we wound up with a pretty level, solid layer of fog that blotted out the city, but left us and Mt. Lee above the fog. It was very pretty. These were cell phone shots. 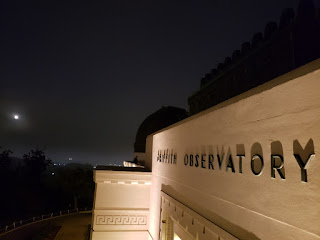 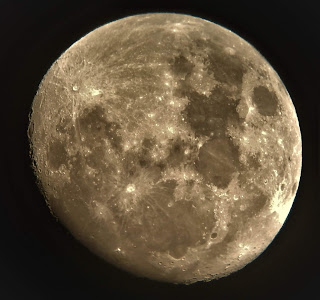 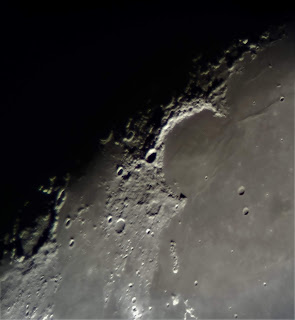 November 7. Cell phone shot through the 12" Zeiss. Something like 300 magnification, I think, and cropped a bit. Because it's a achromatic telescope, especially with the ultra-wide eyepieces, you get a lot of chromatic aberration around the outer part of the field of view, so I cropped that part out. 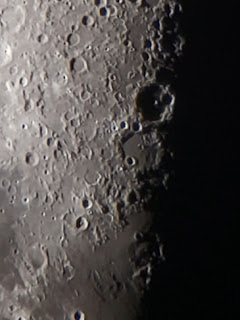 October 5. Cell phone shot. I didn't work that night, so apparently this was a sidewalk astronomy night for me, out in Monrovia. I think I brought my 8" Dobsonian to the sidewalk, that night. Cropped a bit, to focus on the terminator, because the brightness varies a lot on a first quarter moon. I wanted to focus on the "Lunar X" and "Lunar Y," a couple of funny things that are visible (due to a coincidence of altitudes and lighting) only a few hours each month.
Posted by SkyHiker at 5:13 PM No comments: