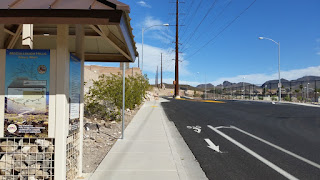 Hiked Friday, March 25. 4 miles. First time on this trail. Out on that Bird and Hike website, which had a page on the McCullough Hills Trail. I was unaware of this trail previously, but was trying to find alternate access points to Sloan Canyon National Conservation Area, since my access to the Petroglyph Trail became spotty on account of construction in the Inspirada development. 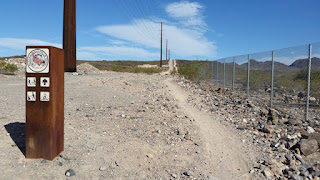 The pictures I saw on the Bird and Hike site made me curious. However, as is often my habit, I only read directions to the trial head carefully. I like to keep the actual hike a bit of a surprise for me. 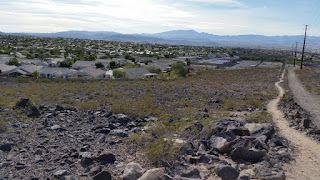 Access was from the road adjacent to Del E. Webb Middle School and Anthem Hills Park. From St. Rose Parkway (or the Southern Beltway, I-215, which is only a mile or so north of St. Rose Parkway at this point), I took Eastern Avenue south. After about 1.5 miles, Eastern splits, and I stayed to the left, which was Anthem Parkway. At the first light (Reunion Drive, about 1/2 mile away), I made a left. Another half mile on Reunion, and I took the first left, at McCullough Hills Parkway. 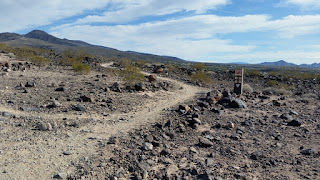 McCullough Hills Parkway is a short spur of a road, which runs immedi-ately north of Del E. Webb Middle School, and immediately south of Anthem Hills Park. It ends right after the school, and turns into the trail. The park is on your left. Once in the parking lot, trail parking appears to be to your right, though I'm sure you can park anywhere in the park you want. The park has several ball fields and restrooms, picnic areas, and basketball courts. 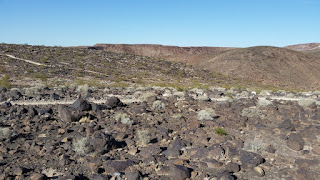 The trail is to your east. The Anthem "E" Trail appears to have a formal trail head at the end of the parking area. It's a paved, ADA-accessible trail. (On the other hand, on Google Maps, this trail appears to continue in unpaved form for quite some distance). 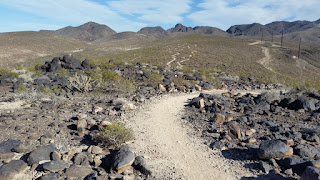 I didn't pay enough attention to the write-up to know this. Instead, I just walked back down to McCullough Hills Parkway, turned east, and walked past the End of Road barriers. This put me on the dirt access road that runs along the big brown power line towers. These appear to be the same power lines that run by the access to Petroglyph Canyon, although, in looking at Google Maps, they appear to get down towards Petroglyph Canyon trailhead by making a long job to the southwest, along something labeled "Nevada Power Trail." I guess I caught the east end of this trail during my hike in Sloan Canyon National Conservation area. 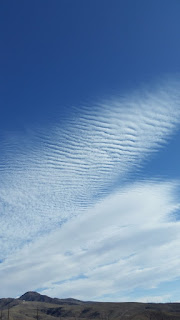 For my own hike on this day, I decided to try to stay on the "McCullough Hills Trail," and followed the markers where they were. But there are many crossing trails, and signs that indicate hikers, bikers and horses on one side or the other of parallel trails, and it's not always obvious which trail is meant for which. I tried to stay on the "main" trail, although I clearly got off it for a while, then rejoined it, a bit later.

I somewhat wanted to make it all the way to the tallest mountains to the southeast, but didn't have the time or motivation. I did notice mile markers on some of the signs for the trail, and passed two mile numbers, so I figured I covered something around two miles out. I turned around at the large metal structure, with a nice view of the surrounding hills. 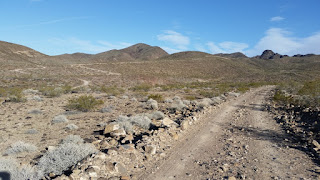 The trail along the way alternated between being smooth, and road-like, with scrubby grasses and creosote, and hard, volcanic rocks. The view also varied, from being dominated by power lines at spots to feeling somewhat isolated. In fact, on my two hours or so on foot, I only saw one or two mountain bikers (I'm not sure if the biker I saw at a distance at one point was the same one or a different one I saw earlier; I don't pay much attention to stuff like that) I saw no other hikers. 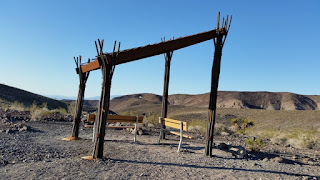 And this was a wonderful, comfort-able, warm, dry afternoon. Early spring. One of those days when you think, "What a wonderful day to be alive." 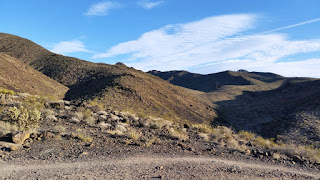 It was also quiet; for the most part, all I heard was the sound of the blowing wind. I guess the planes were using the "diagonal" runway (7L/25R, I think). In any event, they were approaching and leaving far from Henderson this day (a little unusual, since their normal approach is west, parallel to Sunset Road, and right over the condo I stay in when I'm in the Las Vegas area. 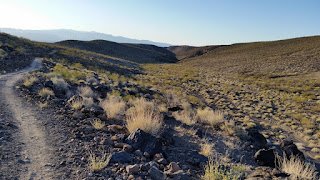 I returned the way I came. There were some nice views as the sun dropped, and we got those long shadows and soft lighting that is somewhat rare in the desert, except at sunset or sunrise, and, sometimes, not even then.

Nice view os the Las Vegas Strip in the distance, too. And Henderson, in several directions. Nice trail system that's building here; not sure what it will look like when it's done, nor where, exactly, the housing will stop forever, and what might yet be swallowed up by urbanization. For now, however, it's a nice hike.
Posted by SkyHiker at 11:23 PM 1 comment: 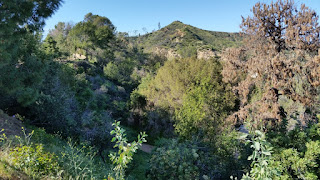 Hiked Thursday, March 24. I'm very far behind in my blogging, and not easily catching up. This one was from the Thursday before Easter. Just a short hike, before a night shift at the Observatory. 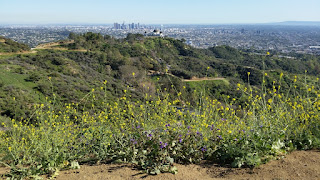 From the Observa-tory, I walked around the parking lot. The first shot is from the parking lot, looking to the east of the trail, which runs along the ridge, over Vermont Avenue. 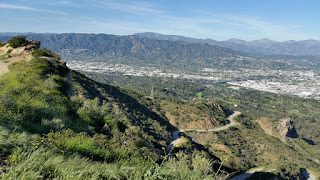 Lots of wild mustard in bloom. A fair amount of sunflowers, too. And a few phacelia, and fewer Canterbury bells. 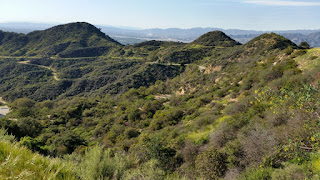 Since I'm often at the Observa-tory, this is by far the most common hike I take. I like it because it's great views pretty much the whole way. Los Angeles at the start, then the Hollywood part of Los Angeles below you, then Glendale to the west, the Burbank to the north. Lots of mountains, too. 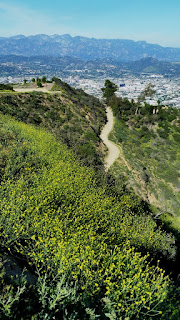 It's a bit under three miles if you just hike from the start of the trail, up Mount Hollywood, and back. If you add in the distance in and around the Observatory, and take the long way around the mountain top, you might be able to squeeze in a full three miles. Close enough to call it a hike. So a short write-up for now. More to write-up, still.
Posted by SkyHiker at 2:27 PM No comments: