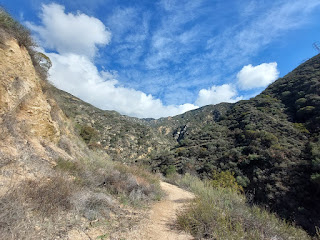 My last hike from last year, first post of this year. Still have numerous hikes from last year I need to blog. Kind of annoyed that my current life pattern doesn't give me time to edit photos and post, except on those rare long weekends where I don't have to work and I don't have to travel. 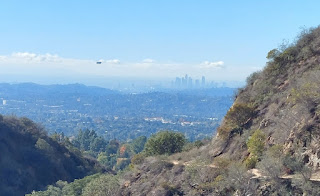 If you're local to southern California, you know it's been a pretty wet past few weeks. Probably six inches or more in the foothills in the past week, and more in the mountains. Figured this made it a good time to go check out some waterfalls. 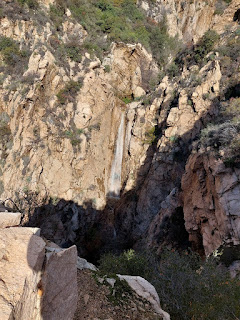 The Rubio Canyon falls, all the way up to Leontine, were among my first few years of hiking adventures. However, my last two attempts to get to Leontine ended in failure. Just couldn't find the way to that descent into the gorge to Leontine.

Turns out this hike was largely the same, initially. My first attempt, I stayed lower, and did not find Leotine, but did find myself on the creek, above the last dropoffs, leading to Thalehaha. First time there, I think. So I went down there, snapped the small waterfalls in this gorge, snapped a shot of some people, preparing to rapel down Thalehaha, then worked my way back up to the "trail." 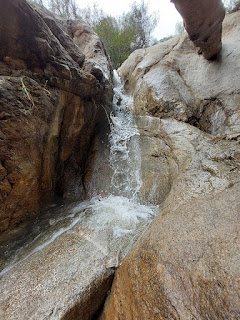 From there, my numerous attempts kept ending in impassable thickets, and led to much backgracking, ascending, descending, and more deadends. Kind of frustrating. I finally admitted I needed help (the first step!), and pulled out my phone and launched the Alltrails app.

I was convinced I had gone the wrong way because I did a lot of vertical climbing, and I did not recall having to gain so much altitude on my successful gos. Pulling up the map, the app showed a trail heading towards a point marked for Leontine some distance back below. So I headed the way my phone indicated, until I neared the trail split, then turned back north. This put me on to an overlook, where I could finally see Leontine. 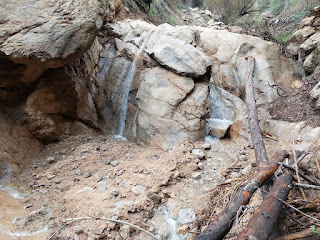 Along the way, I passed another hiker, heading up, who I think was also looking for Leontine, and I'm pretty sure he didn't find it.

Even from the overlook, I was not entirely sure of the way down. But I followed the logical descent, and found myself with some ropes, which told me this was the place. Some of those ropes even looked familiar. :D 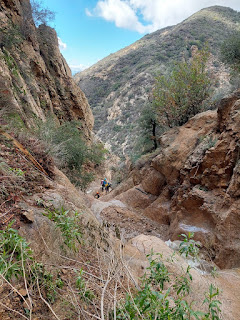 The descent seemed steeper, and with fewer handholds than I recalled. I think erosion has made the descent more difficult, to the point where the ropes are almost a necessity, and not just a handy assist.

I'm not sure if a similar fate (erosion) caused my former route to the Leontine overlook met a similar fate, but it did seem like it took a steeper ascent to reach the more or less lateral trail to the overlook. 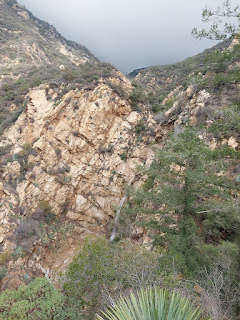 To get around this barrier, you need to attain the height of that "V." You do that by heading straight across the gorge and climbing that up about ten feet, then turning back upstream. The rock closer to the "V" is grippy enough that you can safely traverse this section, despite being on the edge of that aforementioned ten-foot drop. 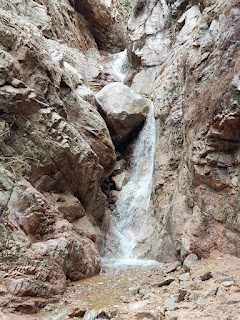 There used to be a log leaning against the opposite side of the gorge that made attaining the height easier. It's still definitely doable, but now it's a short class 3 pitch. It's pretty easy going up, if you're of average height and strength, unless the prospect of needing to go class 3 (which I think of as "no feet on solid ground, pull yourself up," even if it's a very short pull, and with a pretty small drop if you slip.). 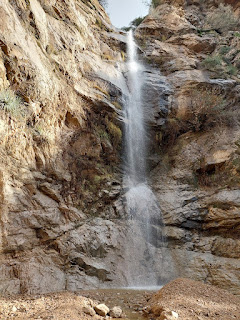 Going past the next falls is somewhat similar, in that it may a longer "tightwire walk," where you're leaning into the side of the gorge and have your feet on a narrow shelf. In theory, its not big deal, since, on this one, if you fall, it's a short slide into a mostly smooth-rock and sand landing. But if the fear of falling gets into your head, it's just long enough to let you freeze up. 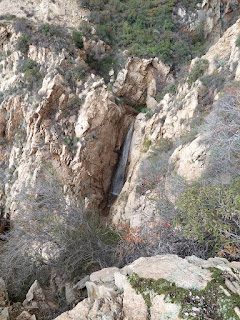 That put me at the base of Leontine, for the first time in several tries (albeit tries I didn't put too much effort into, since I was pretty sure there wasn't going to be much water coming over Leontine, then). It was flowing at least as nicely as the first time I saw it. Lots of pictures, and some video.

I then tried an alternate way back up to the Leontine overlook, that would bypass the two short "scary" segments, but that was stymied by cliffs. So I made my way back down, navigated the two difficult sections with relative ease, and completed my climb up the ropes. Happily, there was no oncoming traffic. No one else coming or going down to Leontine while I was there. 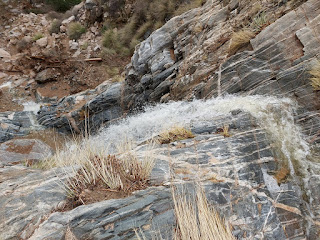 From there, it was back to the Leontine overlook, back to the Thalehaha overlook, then, on the way back to the main trail, I diverted to the Grand Chasm waterfall. That one used to be easier to get to, but erosion took out the more direct route to the landing, above Ribbon Rock/Moss Grotto (I'm actually not sure which one is which). Hadn't been here in a while, so it was a fun diversion. Shot a few photos over the edge from here, too. 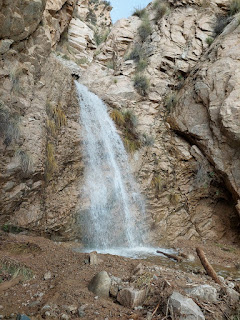 Then it was down to the base or Moss Grotto and Ribbon Rock, then back to my car. My app insists I walked only about 3.5 miles, which seems way low, considering how many deadends I tried. My fitbit put my step total for this part of my day up around 12,000 steps, which seemed more like it.

Really beat, and soaking wet, by the time I was done, regardless of the official distance. Part of the wet was from the water, since the bit near Leontine does include some splash-zone scrambling. Also some splash in the area above Thalehaha, when I contemplated scrambling up the next level (I elected not to). I also scurried under lots of brush, probably still wet from the recent rains. Fortunately, I think the recent cold weather put the ticks to bed, so no ticks found, when I got home. But soaking wet. The shower at home felt good. 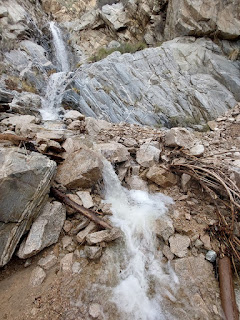 May try to hike Bailey Canyon in a bit. That waterfall hasn't been running the last few times I went, even after some significant rains. I'm wondering if erosion upstream has shifted where the water flows? May find out, today or tomorrow.
Posted by SkyHiker at 12:39 PM No comments: