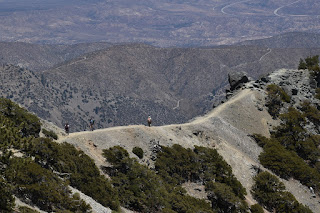 Hiked Saturday, July 17. 12 miles. My previous post was my Mount Wilson hike, taken a week after this one. That was my longest hike in a while. The way I built up to that included this hike to Mount Baldy, also one of my longer hikes, and other hikes a few weeks previous. It was a good progression. 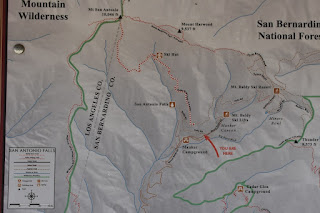 The map here is at the start of the trail, which is at Manker Flats. It's where the road up Baldy splits, and cars will park on both sides of both branches of the road. You start up Falls or Baldy Road, which is paved for the first half mile or so, to the view of San Antonio Falls. 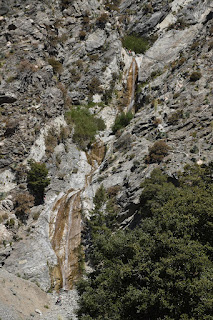 In the winter and spring, this falls can roar. In July, it was pretty sedate. In this picture, you may or may not be able to see several people walking up near the top of the visible falls. Click on the picture to enlarge.

After the falls, the road turns to dirt, and it's a long, slow climb to Baldy Notch. Maybe a half mile after the falls, the Baldy Bowl trail departs, from the left. That's the way I came back. It's a lot shorter, but, also, much steeper. I decided to take the longer route, in part, because, if I did end up turning around early, at least I'd get to Baldy Notch, and a look over into the Mojave Desert. 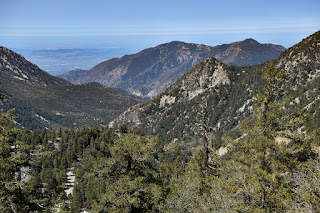 Maybe two miles after the junction, the road goes above the parking area for the Baldy ski lifts. Trails from near this upper parking lot go steeply up a canyon to the road, and also up, under the ski lift. Not sure if the latter is an allowable route for hikers. I did see and hear some hikers making their way up the the canyon, before the lifts, however. 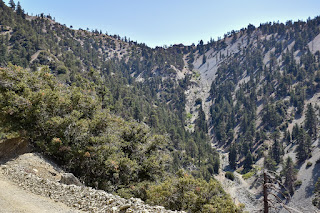 I didn't check on the price to ride the lift. It's used by some as a shortcut for the hike to Mount Baldy summit. It's also used by Mountain bikers, who can then ride down the road that I was walking up. 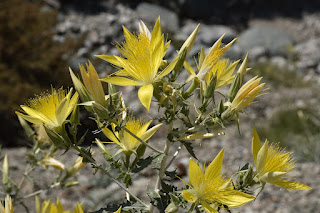 Passed several "Blazing star" flowers as I neared the lifts. 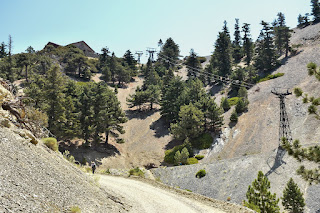 At the to of the lift is the "lodge." Small cafe and benches to sit and eat or drink. Also, flush toilets, so I used one. I'm old enough that I rarely pass up a chance, which is sad, but true. 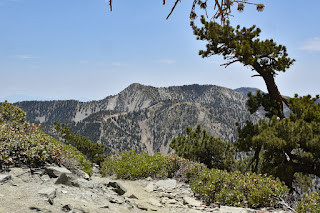 After the notch, the trail heads up to the left, not far from a second chair lift, which does not operate in the summer. It's pretty steep. Usually also windy up here. 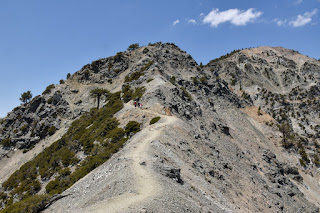 Nice views in many directions from this section: Over the notch, into the desert, and over the canyon, at the maybe tall peaks, including the Three Ts (Timber, Thunder, Telegraph). 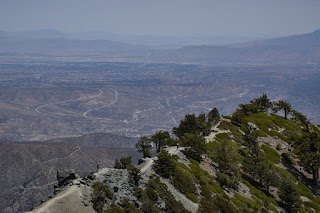 Then it's the Devil's Backbone. The narrowest section begins about 1.5 miles after the Notch, and is only really narrow for a short bit, although much of the next 3/4 of a mile or so are along the side of a serious drop off.

The narrowness and dropoff makes this segement of trail not unlike the end of the hike up Zion National Park's Angel's Landing. Yet, also not unlike Angel's Landing, assuming average dexterity and balance, the Devil's Backbone is not particularly precarious, unless you have vertigo or a sudden loss of balance. 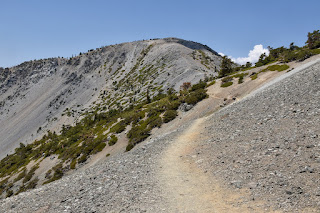 That's in the summertime, of course. In the winter, when snow-covered, this is an incredibly dangerous crossing. It's just one of several places along this trail and the Baldy Bowl trail where, in winter, a slip could lead to a fall of hundreds of feet, at least. I wouldn't recommend doing this hike when there's snow, that's for sure. 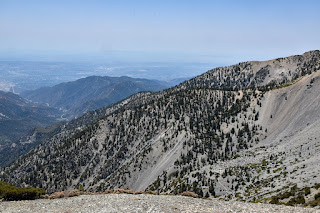 If you are going when snow is on the ground, you'd want to make sure you have spikes on your boots and a snow axe,in your hands, that you know how to use the axe to arrest a slide, and have it ready for use when making a crossing like this. And not just "know" in theory, but have practiced arresting your slide before you actually have to do it when your life depends on it. The trails around Baldy are one those places in southern California where there are hiking fatalities almost every winter. Also, not unimportantly, those fatalities are often of "experienced" hikers. 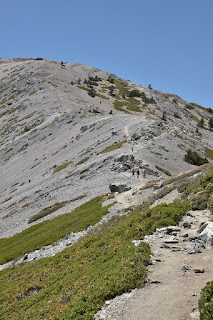 Although it seemed longer, I think it's only a 1/4 mile or so of seriously narrow walking. There's maybe a 1/2 to 3/4 mile section, total, where you may need to stand aside let approaching hikers pass. That's a bigger barrier to your progress than the trail, itself.

After that 3/4 of a mile, the trail begins a steep ascent to the broad, bald summit of Mount San Antonio. 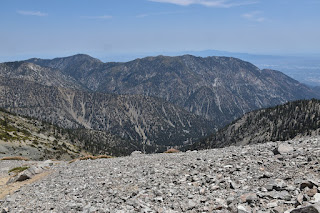 The summit was crowded on the weekend day I was there. That's to be expected. It was also pretty congested as I made my way along the narrow section of the Devil's Backbone. But, all in all, despite the number of cars parked at the bottom, most of the trail was pretty peaceful, and I had plenty of time to enjoy the solitude. 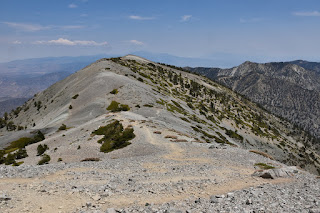 Once there, there are several signs, both indicating where you are and where various trails and destinations from where you are should be. The sign at the top said it was only 3.5 miles down the Baldy Bowl trail to Manker Flats. That is a lie. 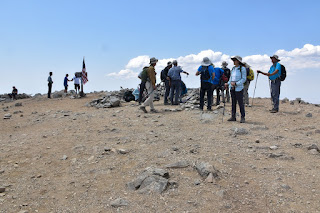 It's actually closer to five miles to get back to the trailhead. That's still nearly two miles shorter than the way I came up, but it was long enough to leave me dragging at times, and to continually be surprised by how much further I could see I still needed to go after two hours. 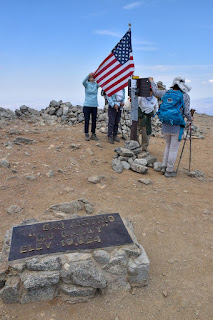 In addition to being shorter and steeper, the Baldy Bowl trail is also harder to follow in spots, but also wetter. There are small seasonal seeps crossing the trail, with nice flowers in spots, at least when I hiked. You also pass the historic Sierra Club ski hut, although it's locked and inaccessible. 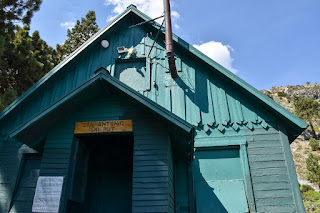 This was a tough hike. My Alltrails app says it took 6:15 of walking time, which was a pretty slow pace. But I did finish, and I'm happy to discover I still could. 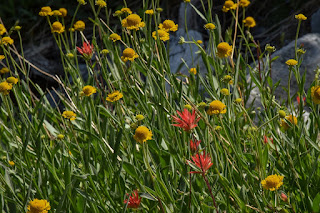 Many more hikes to blog. But at least this one's ready to post. Happy trails!
Posted by SkyHiker at 10:10 PM No comments: 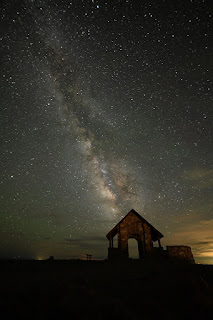 Photographed and hiked Friday and Saturday, July 30 and 31.

On Friday morning, I left the Los Angeles area and headed for Cedar City. Unfortunately, due to traffic on I-15, I didn't get to Cedar City until around 6pm, local time. I caught one serious downpour while still in California, and could see heavy monsoon rains in the mountains above Cedar City. Nonetheless, by early evening, I figured I might as well drive up and there and hope the rain would stop. 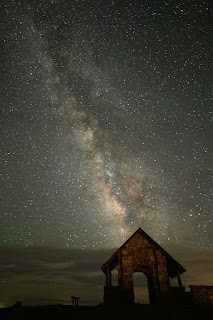 The picture I really wanted was at the Ramparts Overlook, in Cedar Breaks National Monument. I wanted to shoot a bristlecone pine, outlined against the Milky Way. Unfortunately, the heavy rains left the rim extremely slick, and it didn't take me long to determine that walking out there, even after the rain had stopped, about a half-hour before sunset (although the sun was invisible), was not wise. So I returned to my car, and decided I'd just shoot at the overlooks, and maybe drive up to Brian Head. 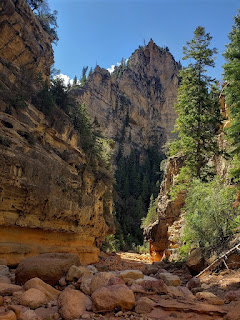 I eventually did make it up to Brian Head, but first listened to a good part of the rangers' night sky talk, at Northview Lookout. The sky was still mostly cloudy. But, as the sky darkened, it also cleared. By around 10pm, it was looking pretty clear, so I left the talk and drove up to Brian Head. Had never been up there, before, despite my many visits to Cedar Breaks.

It stands at about 11,300 feet above sea level, with a stone structure at the summit. But it's a complete drive up, except for the last 50-75 yards. So I drove up in the dark, and started taking pictures. 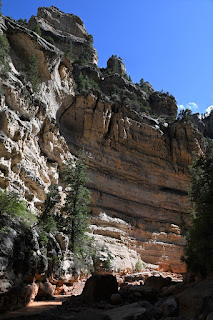 I got to use my Rokinon 14mm f/2.8 lens, which I bought on Prime Day for $250. It's manual focus, but for the tiny fraction of the cost of anything comparable, and since I was probably only going to use it for night sky photography, when you need to manual focus, anyway, it's a relative steal.

I decided that, because of its ultrawide field of view, I could likey shoot for 60 seconds without significant trailing, and I was right. That's the first picture in this post. The second one is with my 20mm f/1.8. Because it's a faster lens (more light gathering power), I shot at 30 seconds with this one. Both were "wide open," and at ISO 3200. 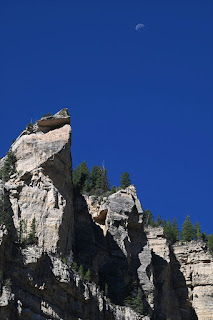 The next day, I took a short walk up Ashdown Gorge. That's off of UT-14, the road from Cedar City, up the canyon and towards Cedar Breaks. Because of all the rain the previous night, the water was high and muddy. Lots of work to make my way upstream. And I forgot to toss a bottle of Powerade in my pack. So I gave up after two miles of zigzagging and backtracking. The return walk took 1.5 miles, and included me bailing on the river crossings, and just charging up to the roadway. About 3.5 miles of total walking. Did not make it to Flanigan Arch.

Very scenic gorge, though. I will likely try again if I get back to the Cedar Breaks area, perhaps in the fall.

Still many hikes to blog. Just thought I'd do a short writeup of the last one, so I stop falling further behind.

Posted by SkyHiker at 9:25 PM No comments: