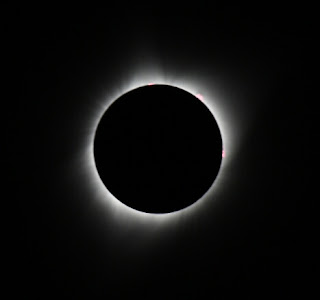 I travelled up to Idaho Falls for the total eclipse of the sun. Me, my wife, and my Prius. We stayed two nights in Idaho Falls, then drove over to Rexburg on the morning of totality. Not really a hiking adventure, but it was highly cool. I may try to write a longer post, with more photos, at a later date. 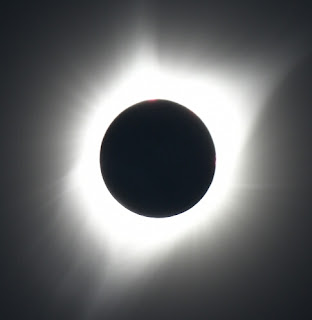 The two total eclipse shots are crops of slightly compressed .jpegs, taken with a Nikon D3400, and a Tamron 70-300mm zoom, shot at 300mm. It was transferred to my phone using Nikon's Snapbridge, which resizes the files down to 2 gb. I then cropped using what ever basic photo editing software comes on a Samsung S5. It's possible I'll have a slightly sharper, and maybe better colored photo if I crop from the full-sized files. However, at the moment, I can'tell find that SD card. That's a story in itself. 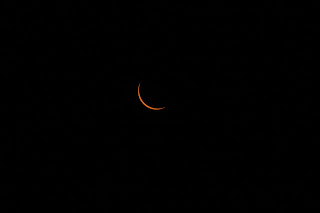 Just tossed in one partial phase shot, from before totality. More details if I manage to do some editing. And I'll type on a laptop, which will be much quicker and easier.
Posted by SkyHiker at 11:39 PM No comments: 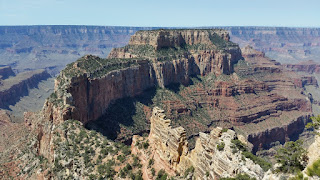 Short walk I took on the morning of Sunday, June 18. Cape Royal is at the end of the road that runs along the North Rim. Google maps says it's about a 46 minute drive to cover the 22.7 miles from the North Rim Lodge to the parking area. From the North Rim Lodge, you head north on AZ-67 about three miles, then make a right at the sign that points to Cape Royal and Point Imperial. Drive 5.4 miles more, then turn right (or stay right) towards Cape Royal. (The left would take you to Point Imperial). Continue about 14.2 miles to the end of the road. 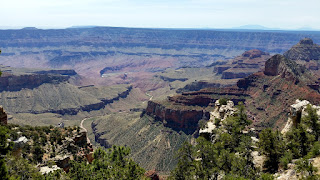 From the parking area, there's a short, mostly paved trail, which the Park Service says is 1/4 mile, each way. I suspect if you do the detour on to the top of Angel's Window and the little area adjacent to the fenced overlook, it's more like 2/3 of a mile, roundtrip. It's also essentially flat, with no significant gain or loss of altitude along the way. In other words, yes, very short, but slightly longer than the distance implies. 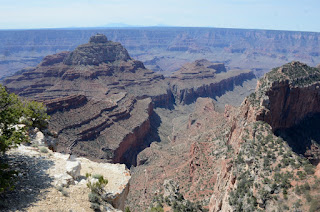 I have a mixture of shots here, both from my cell phone and using my Tokina 11-20mm f/2.8 lens on my Nikon D3200 dslr. The 3200 is a 3-4 year old model; they're up to D3500 now, I think. The 11-20mm is newer, an upgrade Tokina brought out to succeed their 11-16mm. This one gives you a more standard "upper" end, but still has the superwide 11mm at the shorter end, which gives you those nice, panoramic landscapes, and capture those nifty Milky Way shots from dark sky locations. It was something around $500 when I bought it, but I really wanted the wide field and f/2.8 speed. 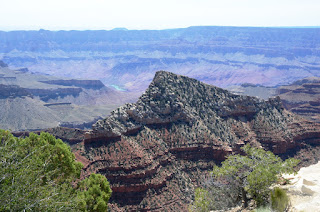 At the same time, I'm still amazed by how good the cell phone shots look. This is a Samsung S5, which, again, is about a 4 year old model. It can't do anything other than wide to super-wide angle shots, but it does those well, as long as the lighting is sufficient. To compare, the slightly wider-aspect shots are from the cell phone, while the more standard-shaped shots were with the dslr. 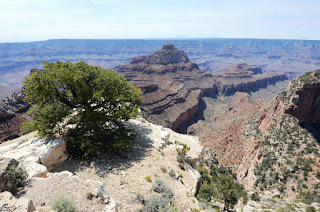 I hadn't managed to make it to Cape Royal last year, so I really wanted to see it, this time. I had to do it quick, because I had to be somewhere else, soon. But, as I said, it's a short walk. And it was definitely worth it. I would agree with many who say it's the best view from the North Rim. 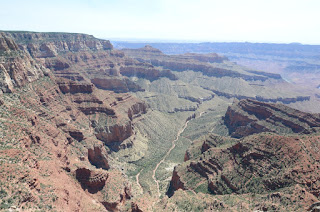 Given the shortness, you'll probably want to hit the other sights on this segment of road. There's a very unimpressive foundation of a Pueblo dwelling, just a bit further back down the road, and an overlook, nearby. That's literally a five minute stop 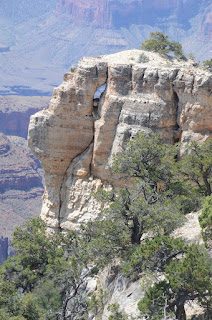 For a longer (but still not very long) hike, you'll also have passed the trailhead for Cape Final, which I did hike last year. That one was 4.4 miles roundtrip.

The other option in this area is to drive over to Point Imperial (which I did, the next day, on my way out of the park). There are also some trails that run on either side from Point Imperial, and on back towards the Kaibab Trail and the North Rim Lodge area. I may try to hit some of those other trails, next year, if I'm able to make it back here, again. 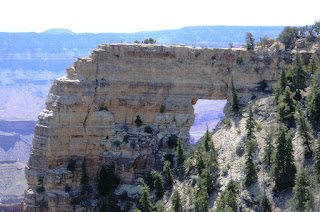