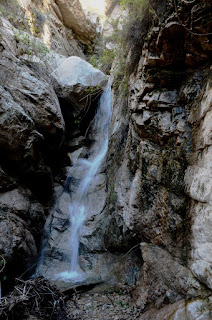 Hiked Saturday, February 25. Apparently, it's been a week since my last post. That doesn't seem possible, yet, there, the evidence is. This hike was some three weeks before that last hike. It was after a wetter period than the last few weeks had been (although it's drizzling as I speak). Also, it was February, so my Federal Recreation Pass was still valid. It expired last month. I'm debating if I will renew it this month or wait until next month. Most likely that latter, since I probably won't have time to hike anywhere with a federal land fee for a while, maybe not even in April. Also, I have some state park passes that I will need to try to use by the end of next month, too. 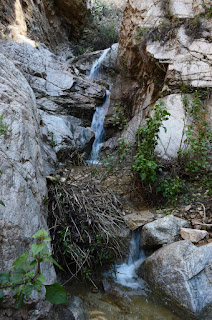 With all that recent rain, the local waterfalls were running well. I'd visited those I could visit. Unfortunately, Fish Canyon falls is in a fire closure area. But I made many trips to Rubio Canyon this winter. Having posted those earlier shots, here, I just posted those from Thalehaha, and beyond.

This was after one of the first dry weeks in a while, so while the water was still flowing fine, I figured the land itself would have dried out enough to be more easily passable beyond Thalehaha.

It had been a while since I walked past this falls, and my memory of how to get beyond was murky. 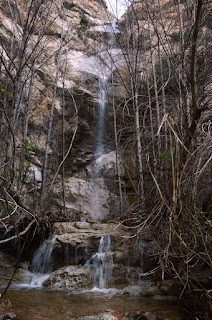 Also, Rubio Canyon is very crumbly and I'm pretty sure the way beyond has shifted, somewhat. After all, I had previously determined that the trail to Grand Chasm falls was no longer safely passable. So I did eventually find the way to the drop down into what I call the middle falls area of Rubio Canyon, but it seemed harder to get to than I recalled.

BTW, it's always been a little crazy to get there. All that scrambling around among the brush had gotten several ticks attached to me, in the past. Fortunately, no ticks found me, today. 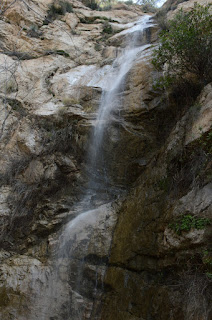 Because of the difficult path finding beyond the Thalehaha overlook, I don't generally recommend going beyond there. I, myself, also usually do not go beyond, in part, because there is rarely enough water flowing to make visiting these waterfalls worth the trip.

But, from Thalehaha, I continued to the northeast, eventually reaching the point with an overlook, down a steep ravine. You can walk part of the way down the ravine, at which point you will hopefully encounter ropes, tied to tree trunks and tree roots. The descent then becomes messier, especially if it's wet, as it often is, down here, even when water is not flowing. 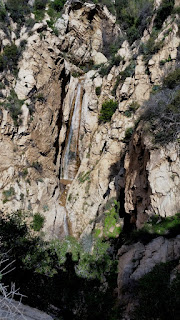 At the bottom, I was in a narrow-bottom canyon, with cascades upstream, a generally unpassable way downstream, and a short but steep cliff across the narrow stream. I snapped some shots of the small waterfall or cascade here, then scrambled up to the trunk of a downed tree, which I used to help make my way partially up the cliff. Then I traversed to the top of the first cascade, and scambled up the next few cascades by climbing among the rocks and water. It's definitely class 3.

From the top of the last cascade, there's a small meadow, with trees in front of you, and a huge cliff beyond. The last of the "easily" accessible Rubio Canyon Falls, Leontine, comes down that cliff.

Probably four miles, roundtrip. A more detailed discussion of this area is provided on Dan's Hiking Page.
Posted by SkyHiker at 9:53 PM No comments: 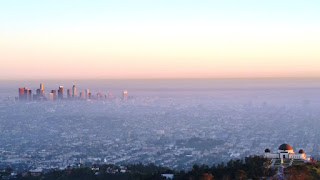 Hiked Monday, March 13. After work, on the first full day of Daylight Saving Time, I had a couple of peculiar reasons to head to the Observatory. Arrived there around 5:40pm. Sunset is currently just around 7pm, and I knew I had until 7:30pm to get back down to the Observatory, so I could see a speaker. 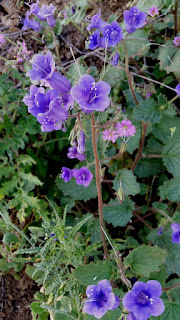 That's plenty of time for this hike, even at a relatively leisurely pace. I wanted to do that, because I was in my work clothes (minus only my tie). It was still somewhat warm, so I intended to take the eastern approach to the top (shaded from the setting sun), and try not to sweat too much.

There are lots of wonderful views back to the south over almost this entire hike. The Observatory, with the DTLA skyline, looks impressive, day or night.

A fair wildflower bloom is on going. The most common flower is wild mustard, followed by phacelia and Canterbury bell. Lupine are a distant fifth. I think fillaree are probably fourth, but not very interesting to me, since they're such a common yard weed. 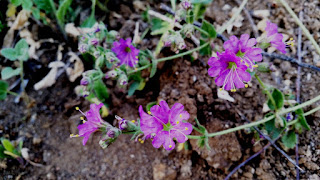 Also, at the last turn before heading to the summit, there's a nice little tree, covered in tiny flowers. I'm assuming it's a wild lilac: very fragrant. 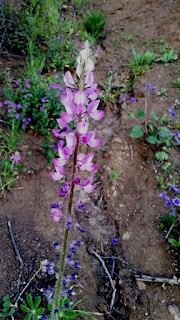 With my very leisurely pace (but not all that much time at the summit), I got back down just around 7:30pm, which was in time to listen to a very entertaining and informative talk on observing solar eclipses. The speaker was Mike Simmons, who founded "Astronomers Without Borders," and has observed numerous eclipses from all over the world. He was the guest speaker at the monthly Los Angeles Astronomical Society Meeting, which was held in Griffith Observatory. Since I am planning to see the August 21, 2017 total solar eclipse, the talk seemed like something worth catching. 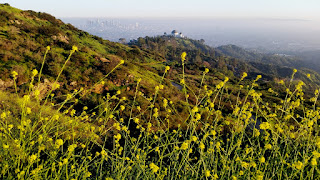 Interestingly (to me, since I was not driving at this time), there was a double-row of cars, gridlocked, on the way up to the Observatory as I returned from my hike. No, they were not coming for the speaker. They probably thought they were coming to visit the Observatory, except the Observatory is closed every Monday. As I joked to my wife, "If only there were some sort of Interconnected network, or web, of informational pages that could be accessed from anywhere in the world, making that information widely available to all who are able to connect to this network." 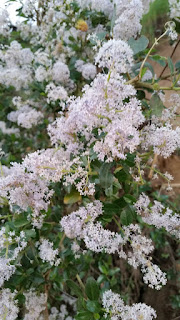 So, partially, it's because of the stupid visitors not knowing they were driving up there for nothing. And partly, it was because the main lot was being reserved for LAAS meeting attendees. And, partly, it's the new traffic layout they're working on. 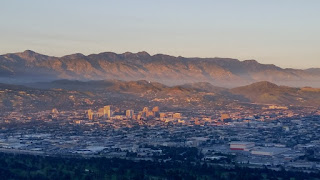 Starting next week, parking along West Observatory Road or the upper parking lot will cost $4/hour. Alternatively, parking down by the Greek, or possibly on Western Canyon, will be free. Also, there will be seven-day-a-week (or maybe six day a week?) shuttle service. I think it's going to be the regular DASH bus, from the Sunset and Vermont Red Line Station, with stops at the Greek and at the Observatory. They may also add a circulator bus, just between the Greek and the Observatory. It's still a work in progress.

The first few days with the new traffic pattern has been a pretty big disaster, I think. We'll see if things run smoother after the fees and buses start.