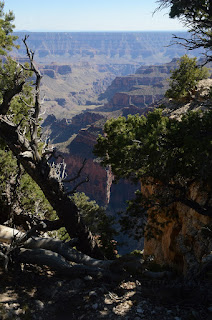 Saturday, June 17. This is my second year on the North Rim for the opening of the star party, there. Last year, I was just there for the first night. This year, I stayed two nights. At this rate, I"ll be staying for the whole thing by the time I'm 60. :D

The Grand Canyon Star Party is an annual event, that takes place on both rims of the Canyon. The North Rim is much quieter, however. There's just a small veranda on the back of the Lodge, with room for maybe a dozen telescopes (depending on how large the telescopes might be). There are a few hundred guests at the various motel and cabins on the North Rim, and a few hundred more in the single campground on that rim. Obviously, not all come out to look through the telescopes, so it's usually a manageable number, spread out among those dozen telescopes. 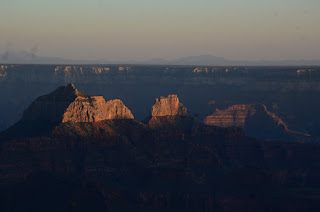 This may be one of my favorite events of the year, just because of the location, and the crowd. It's a large, but generally well-behaved and well-informed crowd. Obviously, I do a lot of public astronomy, and some nights go better than others. Some nights, you feel like you're talking to yourself, because you're describing the object to the people in line, but as soon as you finish talking, someone in line asks, "What are we looking at?" Just last night, I had someone ask me three times, "What are we looking at?" and I said, "Saturn," and, "This telescope is pointed at Saturn, the one over to the right is pointed at Jupiter, and the one to the left is on the moon." But he kept asking what we were looking at. So I said, slower, louder, and more clearly, "This telescope is pointed at Saturn." And he asks, "So you're looking at a star?" "NO," I say, "This telescope is looking at Saturn." "So you're looking at a star?" "NO, WE ARE LOOKING AT SATURN." 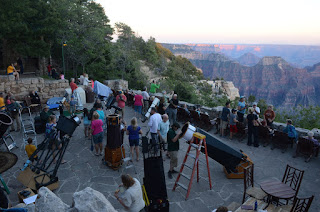 To some extent, yes, it's my job to "interpret" the object to the level of knowledge of the viewer. But if you don't know that Saturn is a planet, then why bother asking what we're looking at? There's no possibility that you'll know what we're looking at, if a simple answer like, "Saturn" makes no sense to you. But that's at a different location, with a different crowd. That doesn't happen at the Grand Canyon. 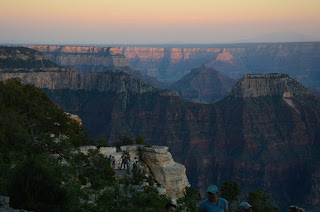 Took a short walk around the North Rim area before the star party on Saturday. Did a few other short hikes, as well. But the main point of the trip is to volunteer with the telescope. People at these sorts of events really appreciate the views, and we have a lot of fun showing them things we can't see from home that we can see a dark sky location, like Grand Canyon National Park. 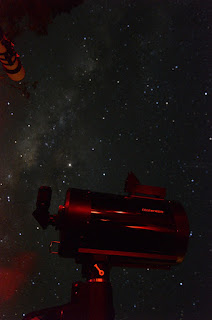 I picked up Jupiter about an hour before sunset on Saturday, and stayed on that until the sky got darker. Swung over to Saturn, once it cleared a tree. Then, once it was really dark, swung to the southern horizon for Omega Centauri, which is an amazing sight, even from 36 degrees north latitude, if the sky is dark. It's far larger and star-studded than M13, the Hercules globular cluster, but lies so far south that you need a low, clear, dark southern horizon to have any chance to see, and, even then, you've only got a few hours during any given May or June night to catch it (or maybe really late in April or March!). 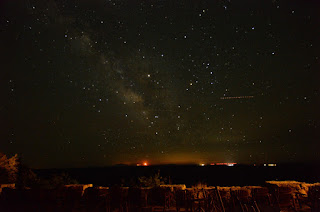 That's my C11 in the previous picture. Here, I'm just shooting over the Canyon. The airport lights are red and run along the horizon. There was also a fire, burning in the mountains beyond the South Rim. But the Milky Way still looked nice. In this shot, the flashing lights of an aircraft appear to be an arrow, shot by the centaur, Sagittarius. Probably around ISO 1600, f/2.8, and 15 or 20 seconds.