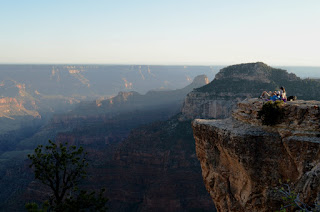 Hiked Saturday, June 4. 3 miles. I give this as 3 miles, but most of that was just walking back and forth between the parking area and the veranda, where we had the star party.

I'm ridiculously behind in my blogging, so I just want to get something new posted, after all this time.

This hike was just around the North Rim Lodge. I was up there to volunteer (for just one night) with the Grand Canyon Star Party. Just felt like doing something different. 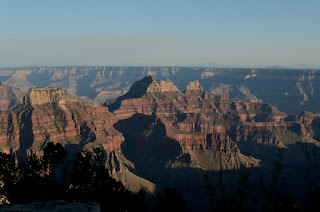 After taking a longer hike earlier in the day, I arrived to begin unloading for the star party a little before 6pm. Unloaded the car, ferried things from the parking area to the veranda, then waited for dark. While waiting, I took the short, 1/4 mile each way hike to the overlook above the North Bright Angel Trail. 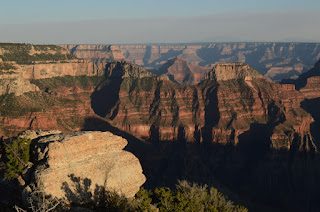 Caught that really nifty shot at the top of this post. It wasn't far from the lodge, but once you're out of sight, I guess people are willing to walk out beyond the barriers. They weren't anywhere near the edge, however, so I didn't feel they were endangering themselves or anyone else. 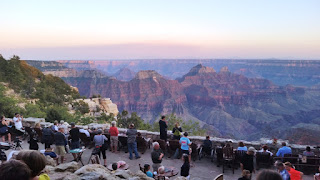 After I got back to the lodge, I ate some dinner, waited for dark, then had a very hectic, but very rewarding, shift as a volunteer with the North Rim Grand Canyon Star Party. I showed Jupiter, Mars, and Saturn, as well as deep sky objects Omega Centauri, the Leo Trio of Galaxies, M81/M82, M51 and M104, M8, M17 and M20.

Not all that many objects, because there was such a continuous crowd for most of the night that I didn't have the chance to move to many new objects, nor do a goto alignment. I mostly just went to things I could find quickly and without my goto.
Posted by SkyHiker at 9:41 PM No comments: