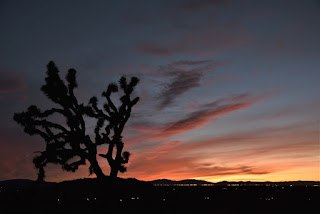 I was watching weather reports for the past week, looking at forecasts for everywhere from southern Utah and western Arizona, and all over southern California, trying to decide where I'd have the best chance of clear skies. By the last day before the eclipse, it became apparent that north and northwest of Los Angeles was the place to be. So I settled on Saddleback Butte State Park, which is a bit east of Lancaster. 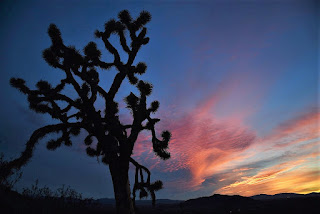 I've hiked here before, and also observed from here before. It's not nearly as dark as places like the Mojave Preserve or even Joshua Tree, but it's closer, and it's warmer than places like Chuchupate or Mount Pinos, which are higher in altitude, but also had good sky forecasts for the 20th. 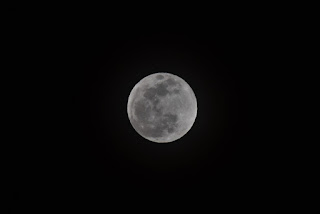 I wanted to get up there early enough to have time for a little hiking, but not so early that I'd have to spend too much time just sitting around, waiting for the eclipse. Turns out, I waited too long, and only had time to head a mile or so up the trail. Still got some nice post-sunset shots, though. 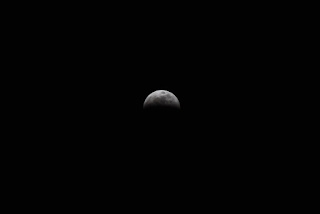 After returning back to the campsite ($20/night), I decided to eat dinner, a Jersey Mike's subway sandwich. My birthday was last month, so this was a good chance to use my free birthday sandwich coupon. :D 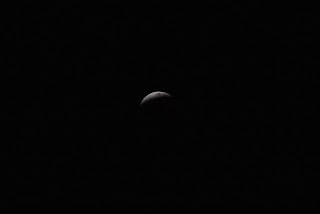 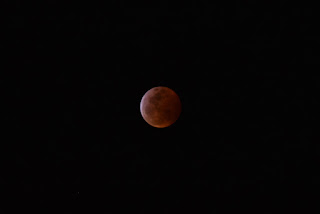 Still, fortunately, the battery did last long enough for me to get decent moon shots and backdrop shots. Couldn't fine tune the focus on the moon, though, so I had to shoot short exposures and high iso, which were not the best quality. 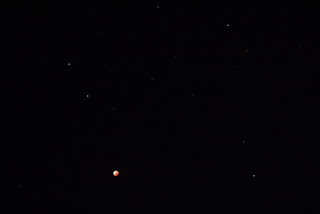 The second to last shot was just a few seconds long, so the moon is only slightly overexposed, and the moon still has a copper hue. Castor and Pollux and the constellation Gemini are above the moon. Procyon is the star to the bottom right of the frame. 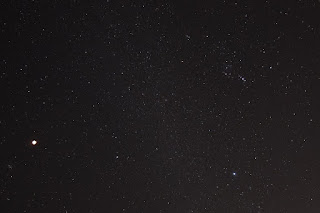 The last one was about 15 seconds at iso 1600, to get more background stars, but that overexposes the moon severely. As a result, the moon is completely washed out. But the sky looked nice.
Posted by SkyHiker at 12:51 PM 2 comments:

Still catching up on my October trip to eastern Utah. This is the late morning and early afternoon of October 8. Just about 3 1/2 hours separate the first picture taken from the last, and that's with what must have been at least a half-hour, waiting in a line of cars to actually enter the park. 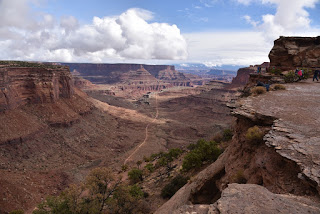 Started the morning in Moab, did an early morning hike around the Windows Section, returned to Moab to check out of my motel room, then headed towards Canyonlands. The first shot was on the drive up towards Canyonlands, while still in BLM land. There were several parking areas, which are trailheads for mostly mountain bikers, I believe. 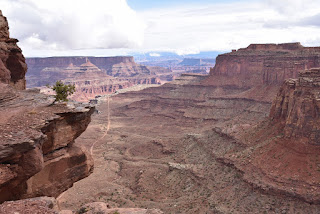 The next three shots were from a very short walk from the road to Shaefer Canyon Overlook, just barely within the park. There's a steep and winding jeep trail that drops down into the Canyon from the paved road. 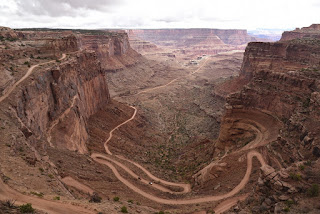 The next three (and I think the two after that, judging by the time stamp on my shots) are from the very short trail to Mesa Arch. I think they give the distance as a 1/2 mile loop. Very easy, and to a very photogenic arch, which is in the rotation for screen savers on your Windows computer, so you've probably seen it before.

It looked nice, even in fog. The trail was somewhat crowded,as you would expect for a short but scenic hike. But I found parking in the smallish lot, nonetheless.

My next stop was at the end of this segment of road, at Grand View. When I parked, the fog, clouds, and rain was too thick to even see the cliff. So I waited in my car, as, I think, did many others. Finally, after probably 30 minutes, it seemed the rain had slowed. I got out of the car, carrying only my phone camera, again. Still too wet to want to risk my DSLR.

I walked out to the overlook and enjoyed the view, taking many pictures. Drifted back to my car. Then drifted back to the view. While there, I observed what appeared to be a trail, leading off, along the cliff. Debated going, as the threat of rain did not abate. Nevertheless, I persisted. ;)

I did not know at the time, but it turns out this trail is 1.8 miles, out and back. I had the trail largely to myself, as, until about when I started, the clouds were so thick that there was little to be seen along the trail.

The clouds blew by, and my view into the canyon changed, by the moment.

The drop-offs were serious, but the canyon rim was pretty much completely level. No wind, so I felt fine, and enjoyed the near-solitude.

Reached the end, shot some more pictures, then headed back. Retracing my steps, but with the shifting clouds and perspective, it did not feel like covering old ground.

The traffic increased as I neared the trailhead. By now, the clouds had lifted enough that the threat of torrential rain had abated, and others were heading out to walk the canyon rim.

Can't believe it's been over three months since this hike, and a month since I managed my last post, here. So far this year, I've been pretty much limited to Griffith Park. Not much time for hiking, on account of family matters. And not much time to post, on account of kitties that like walking on keyboards.

But the recent rains have me looking forward to a checking out some of the local waterfalls, this weekend. I do hope I manage that. . . .