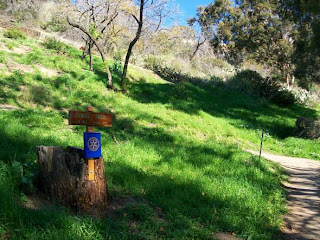 After my unsuc-cessful search drive by this trail last week, I went on Google Maps and found the error of my ways. The fire station is located right at the second traffic circle. That's why it's so easy to miss. If you're heading east bound from Azusa Avenue/San Gabriel Canyon Road, you should start looking for a parking spot right after you get out of the second traffic circle. 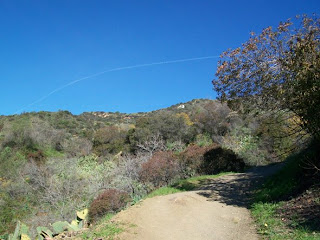 This whole section of Sierra Madre Avenue was realigned recently. That means when you get out of your car, you need to take some care walking along the edge of the road because the gutter is about one inch higher than the rest of the road. 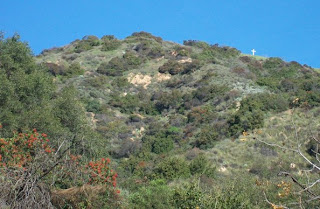 From the 210 freeway, exit at Azusa. Head north about two miles, past the new Target and the area Azusa hopes one day to look like Old Town Monrovia. (Right now, most of the storefronts are empty). As you approach Sierra Madre Avenue, you'll notice Azusa Avenue splits Three lanes curve to the left, while one lane goes straight. Go straight, to the signal. That's Sierra Madre Avenue. Turn right, heading east for just over two miles. After the first traffic circle, you'll pass small side streets with silly names like "Lemon Swirl" and "Orange Blossom Way." When you pass "Azusa Veterans Way" and "Crape Myrtle," you're getting close to the second traffic circle.

As soon as you exit the traffic circle, start looking for a place to park. 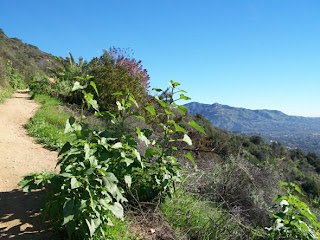 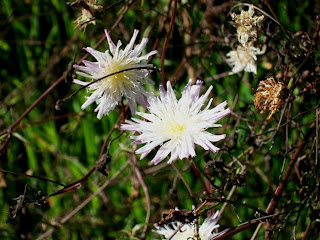 There was a blue metal box with the Rotary symbol attached to the trailhead sign, but the box was empty.

When I parked this morning (around 9:30am), there were only a few cars near the traffic circle. But I passed at least five groups coming down the trail. That indicates a lot of the folks walking this trail are real locals, who walk straight from their home, apartment, or dorm. Also, because most are only doing the 1.2 miles, they're traveling light. I think I may have been the only person I saw today using a day pack.

Pretty much the entire trail has southern exposure, so I imagine this trail can get very uncomfortable in the summer. This morning, it was still in the 60s when I got started, and in the low 70s when I got back. 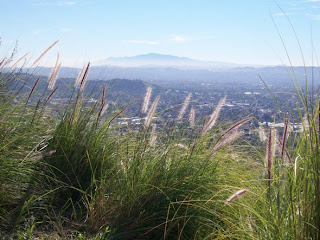 I noticed a LOT of bush sunflowers growing along the trail. They should be putting on quite a show, once it warms up a bit. However, as of today, there are only a few scattered sunflowers. There were a few cliff aster, as well.

I kept a comfortable pace, looking to see what could be seen as I climbed. To the west, I could see the mouth of Fish Canyon, with the mining scars. Closer was the entry point for Roberts Canyon. Closer still was San Gabriel Canyon Road (CA-39), and the San Gabriel River. 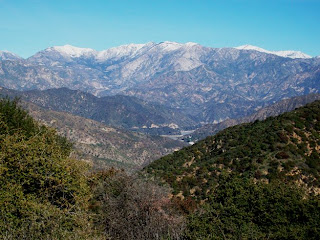 Didn't time myself, but I would estimate it's just about a mile to the crest. There, you meet a dirt road, identified on my map as Glendora Ridge Motorway. Looking over the crest, you can see the San Gabriel River (today, still very brown with runoff) and CA-39 running along side the road. If you peak a little closer below, you can see the equestrian center that's just below the El Encanto building that houses the San Gabriel and Lower Los Angeles Rivers and Mountains Conservancy. There's also a Buddhist retreat tucked in down there. 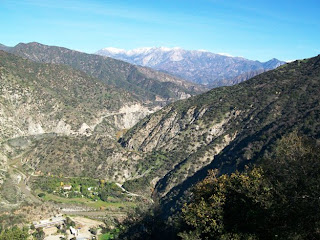 From the crest, Glendora Ridge Motorway heads both directions, but the path to Azusa Peak is along the ridgeline, just to the right (south) of the road. It's an easy walk up from there.

At the peak is the previously-mentioned white cross. It's covered in graffiti. A mailbox-looking container on the side of the cross was empty.

Several ravens and at least one turkey vulture kept flying around me on the way up. Many smaller birds were also about, but I couldn't identify them. 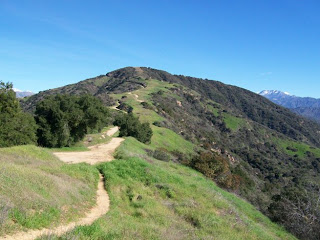 From Azusa Peak, I could see Glendora Ridge Motorway, continuing to the east. It curved its way towards a taller peak, which of course I wanted to explore. The peak could be attained either by walking along a rather broad and grass-covered "ridge," or by following the road around the peak, circumnavigating about 3/4 of the peak before a faint use trail came at the peak from the south.

I took the longer route. In fact, I also went a little bit past the peak, to see if I could see Glendora Mountain Road without going too much further. Didn't have the time to go all the way down there, though. 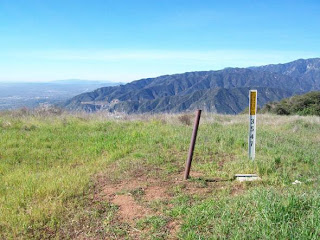 A sign at the peak seemed to indicate an altitude of 3557. However, that does not seem to jibe from what I can see on my Tom Harrison hiking map. Also, Glendora Mountain, with an altitude of 3322, is located somewhat north of this point, and across the GMR from here. It also appears that it should be substantially higher than any where near where I was standing.

Nonetheless, from the 3557 peak, it's a nice perspective down on to Azusa. There are also good views to the west, south, and east. Vegetation on the north side of the peak largely obscures the view that way, however. 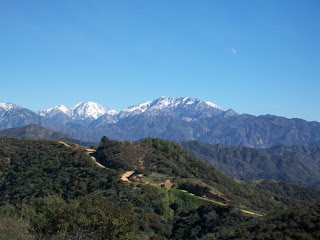 As I prepared to turn around, I noticed a first-quarter moon, rising to the east. It reminded me that I had an astronomy outreach event at a local elementary school tonight (and another one tomorrow). That's part of why I wanted to take a shortish hike today--didn't want to wear myself out too much.

Given the 2.4 miles roundtrip given for Azusa to Azusa Peak via the Garcia Trail, and the additional ~1 mile total distance to get around the 3557 foot peak, then climb the peak, then return back to the Garcia Trail, I figured I did about 3.5 miles total, and about 2,500 feet of net altitude gain (assuming the elevation number on the sign at the peak was accurate--I don't feel like it is actually 1,200 feet above Azusa Peak, however. But I don't have a GPS any more, so I don't have an independent source for altitude or for location).
Posted by SkyHiker at 3:20 PM