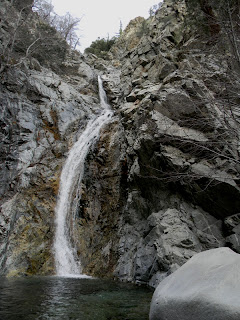 Today's hike had more wrong turns than pretty much any hike I ever took before. I had trouble finding the right road, then I had trouble staying on the trail, then I had no idea where to find the waterfalls. This was a combination of less than obvious signage and me not paying enough attention when I was walking or when I printed out the trail descriptions I found on-line (then left the printouts in the car). 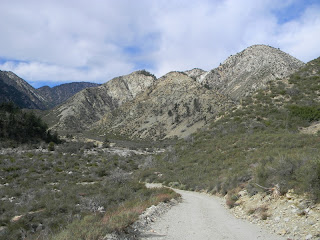 The trailhead is supposed to be at the end of Middle Fork Road. From the Foothill Freeway (I-210), take I-15 north to Sierra Ave., exit, then turn under the freeway. After passing a few gas stations, the road turns into Lytle Creek Road. About three miles later, the ranger station is on the right. You'll need to stop there for a wilderness permit. Also, if you don't have an Adventure Pass or equivalent, you'll probably need to buy one, here. It definitely seems required if you park in the first flat area after you start on Middle Lytle Creek Road, and may be needed if you park at the actual trailhead at the end of the road (haven't been to the trailhead in a while, so I don't know if it's signed as requiring an Adventure Pass as of February 2015 or not). 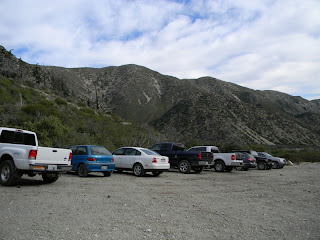 Didn't measure the mileage, but I think it's only about 2 miles past the ranger station that you reach Middle Fork Road. I think it's the first road after Sycamore Road, and there's a brown sign on the left side of the road pointing you the way. The sign says it's 3 miles to the Middle Fork trailhead. 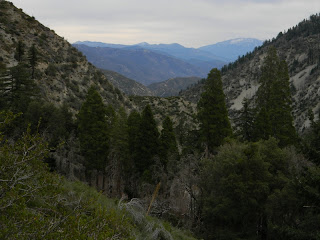 Middle Fork Road is narrow and squeezes between numerous houses. It's paved here, and continues to be paved for about 1/2 mile, until it passes a church. Then it becomes dirt, and rough. About 1/2 mile after the pavement ends, there's a spur to the left that heads to a small parking lot. If you do not have a high clearance vehicle, or at least a short wheelbase, moderate-clearance vehicle, you might want to park there. 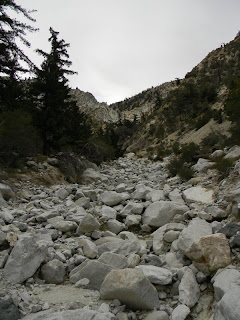 I pushed on about 1/2 mile further, but the going was slow.

When I drove back home, my odometer said it was 1.5 miles back to Lytle Creek Road, so I'm estimating I walked 1.5 miles each way (3 miles roundtrip) just to get to the trailhead.

At the trailhead were about ten cars. Most were high clearance pick-up trucks or SUVs. One was a Geo Metro. Two were VWs. My Saturn has a longer wheelbase and less clearance than any of those, so I figure I made the right choice by stopping when I did. 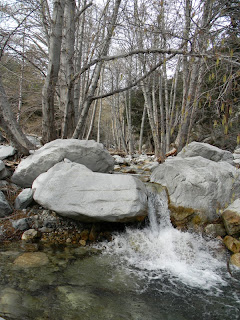 There's a pit toilet at the trailhead. There are also two trails, although only one appears on the Tom Harrison "Mt Baldy and Cucamonga Wilderness Trail Maps" and the map they had at the display near the start of the trail. Because the map and interpretive signs were near the higher of the two trails, I took the higher one. According to the sign there, it is .5 miles to Stonehouse and 2.3 miles to Third Stream Crossing.

I recalled that the waterfalls were supposed to be near Third Stream Crossing, though I did not recall the specifics, and I forgot to bring the printouts with me. D'oh!

May or may not have seen Stonehouse, if that's just the name of the walk-in campground on the lower trail. Of course, I shouldn't have, had I managed to stay on the high road. 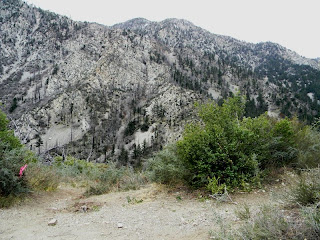 Unfortunately, after .6 miles, I moved off the high trail and on to the low trail. It's a 4-way, "X" intersection where the trails split. I just kept walking straight, because I didn't even notice the full split. A bright orange tie was along that route, so I boobishly walked forward.

I should have made a right turn here to stay on the high trail. A left turn would have put me at the nearby overlook.

Going down led me closer to the creek. Unfortunately, there are a lot of downed trees this way, due to a recent fire. That meant lots of places to lose the trail, and I did lose it a few times on this lower route. This resulted in a fair amount of bushwacking and backtracking before I managed to find a use-trail that took me back to the high trail. 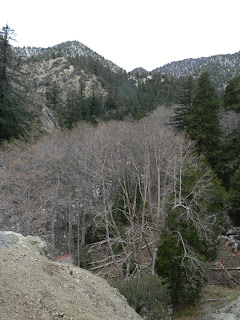 Progress sped up considerably once I was back on this trail. Still, I didn't know exactly where I was supposed to go. I eventually crossed the stream and climbed steeply, reaching a few switchbacks. A check of the map indicated I was clearly past Third Stream Crossing, so I turned back around, and checked out the two canyons ahead of where the trail had turned, thinking perhaps this might be the way to the falls. However, after several hundred yards of travel, it became clear that the waterfalls (which were supposed to be quite close to Third Crossing) were not this way.

Next, from Third Stream Crossing, I headed "downstream," eventually, finding another stream coming in from the right. I headed up that way, encountering many cascades along the way. The steep walls of this canyon convinced me I was on the right track, and, sure enough, I soon saw a waterfall in the distance.

Getting there required crossing the stream several times, stepping in a few inches of water and on some extremely slippery rocks. If the water were flowing higher, this would be a much harder waterfall to get to. 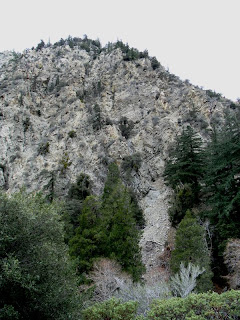 The lowest of the two falls I could see was comparable in height to Eaton Canyon Falls, so I estimate it is about 30 feet in height. The second falls were too far away to get a good estimate, though it seemed shorter.

I have read that there is a third falls above that one, but could not easily and safely get to a position of seeing it. 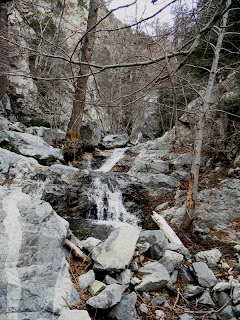 All told, according to my map and estimates, I walked 3 miles on Middle Fork Road to get to the trailhead and back, 1.2 miles roundtrip to get to the trail split, about 1.5 miles to get both ways between the split and remerger, 1.6 miles roundtrip to get from there to Third Stream Crossing, and about one mile total on my excursions up and down the various canyons (including the one with the falls) leading into Lytle Canyon. That's about 8.3 miles total walking for the day.

Were I to do the hike again, I would be careful to stay on the high trail. Shortly after passing a little circle of oak trees (eleven trees, growing in a tight circle), the trail climbs steeply through manzanita, reaching a nice view spot. A massive but fractured granite structure forms the opposite canyon wall.

You would then descend the trail, and either look for a faint use trail that heads into the canyon immediately east of the granite structure, or continue to where the high trail finally crosses the main portion of Lytle Creek (Third Stream Crossing, not signed). Once on the south side of Lytle Creek, head east, keeping the stream on your left. When you run into another stream coming in from the right, turn up along that creek. Follow it up a few hundred yards until it dead ends at the base of the first waterfall.
Posted by SkyHiker at 8:12 PM