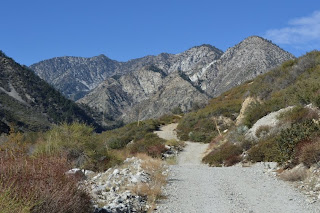 Hiked Saturday, December 8. My first non-working Saturday in a while, which I scheduled for the express purpose of getting a weekly hike in, as long as the weather would cooperate.

Despite threatening weather earlier in the week, Saturday was clear enough to take a moderately long hike. I knew if the weather did cooperate, I was going to try heading out to the Middle Fork of Lytle Creek. I hiked this once before, in January of this year. 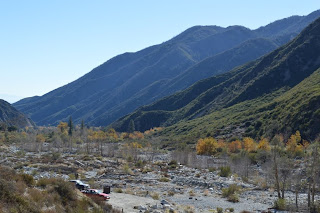 A few weeks ago, there was a comment on that earlier hike post about not being able to find the falls. So I reread my post, and realized that I had a direction mixed up. The directions were odd here because, unlike the Front Range of the San Gabriels, where I do most of my hiking, from Lytle Creek, going "up" meant going west and south. Elsewhere, "up" usually means north.

I wanted to verify my directions, so I decided to do this hike again. 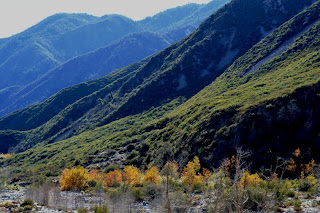 Despite having hiked this trail only once before, my trek here was very familiar. So, unlike my first time, I made no wrong turns on my drive to the trailhead and on the trail, itself. There were a few times where I ended up having to walk further than I remembered, and where a year of weathering had changed some of the landmarks along the way. But, all in all, the hike went well.

You reach the trailhead by takng I-15 north to Sierra Highway. You exit there, and head west. Sierra Highway becomes Lytle Creek Road. Obtain your Wilderness Permit at the ranger station. Also, if you don't already have one, purchase your Adventure Pass there, too.

About 1.8 miles past the ranger station, Middle Fork Road is on your left. There's a sign saying it's three miles from there to the trailhead. 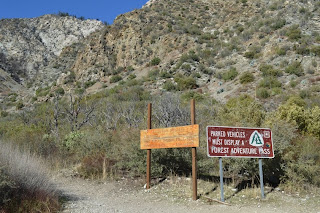 The pavement of Middle Lytle Fork Creek lasts less than 1/2 mile, as you pass between homes and, eventually, past a church. The rest of the way is a dirt road. The last time I was on that road, the going was so tough I wound up just parking at a wide spot in the road, about a mile from the end.

This time, I parked about 1/4 mile from the end of the pavement, where there's a large, flat parking area just down and to the left of the road.

That meant I had a bit over 2 miles of walking along a dirt road each way, in addition to the 5.2 miles or so I would have had to the waterfall and back. 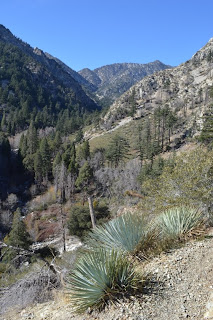 From the parking area, you can look right up the wash and see a broad flood plain. Look down the wash and see it even wider, with several splashes of color where foliage was changing color.

The start of this hike was warm. Although the temperature was probably in the 60s, it was in full sun, with little shade. That's the case for essentially the entire dirt road section of the trail. It's wide and on the north side of the canyon, so there's no escaping the sun. In this section, I wished I had worn shorts and a short-sleeved shirt.

I walked deliberately up the dirt road, which climbed consistently on up towards the trailhead. Most areas seemed like they would be passable for my car. Only two areas looked tricky (including the last stretch up to the official trailhead parking). If I took it slow and didn't mind knocking my alignment out of whack, I'm pretty sure I'd have made it okay. However, only high clearance pickup trucks and SUVs were in the trailhead lot both when I arrived and when I left. 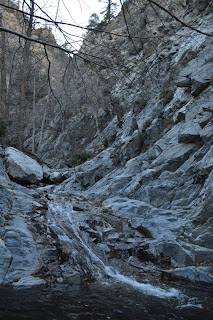 However, after passing reaching the trailhead and walking the first mile or so, the rest of the hike was in shade. The trail moved down towards the bottom of the canyon and the canyon itself had become narrower. In this section, I was happy I had decided to hike in jeans and a long-sleeved shirt.

There are only a few sections of this main section of trail where you need to pay careful attention. First, at the start of the trail, head off from the trailhead and resist the temptation to walk near the water way. Second, if at any point in the first mile, you find yourself rapidly descending towards the waterway, TURN AROUND. You missed a turn.

You may also take a few seconds when you reach a dry wash crossing in from the south. The trail is washed out for about fifteen yards by a wide path of rocks and sand. Scan the other side of the wash out and find your path on the other side.

Finally, when you reach "Third Crossing" (the first time on this hike where you will be crossing significant water, at least unless there's been a recent rain), you'll want to cross the stream, then begin heading downstream (east). You can either stick near the waterway, then turn north when you reach the fork coming in from your north, or head diagonally, to just west of what looks to me to be a limestone cliff. You would have seen this high and to your south as you were still on the main trail. 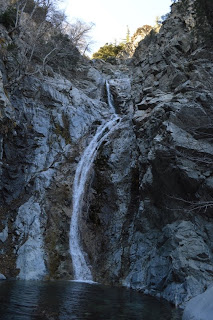 This side canyon is the one you want to go up. You'll have to cross the stream several times in the 1/4 mile or so you will need to pick upstream to where the lowest of several falls will curve into a pool. The second falls will be visible above that first one.

Some descriptions of the hike to these waterfalls would take you to the top of the highest of a series of falls. You'd need technical skills to make it down those upper falls to get to where you are standing now.

You will not need any technical skills to get to the base of the lowest of falls. But you might need to pick your way carefully. The rocks may be wet and slippery, particularly if the water is high. You might even find yourself needing to turn around, or else risk a significant fall into the water, or a willingness to walk through the pools that may be quite deep in spots. 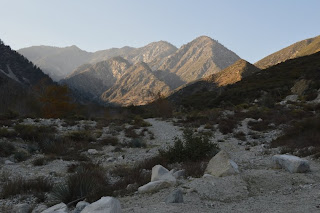 On the two times I have come here, the water has been pretty low both times, so I haven't faced that problem. Can't speak to what it would be like during the spring melt, but I imagine quite tricky.

I returned the way I came. Figure about nine miles and 2400 feet or so of elevation gain for the day. That was last Saturday. I sure wish I had done a hike today, but I got lazy. Should still be able to reach 80 for the year, though. It's not 100, but it's all I could manage, with my current work load.
Posted by SkyHiker at 7:38 PM