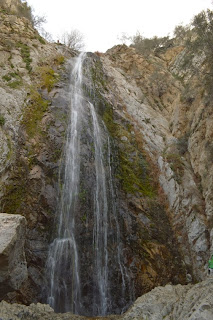 Hiked Sunday, February 16. This hike was a little shorter than what I normally count as a hike. On the other hand, Hike 2014.008 (not yet posted) was basically two hikes in one.

I hiked here once before, at the end of 2011. Been thinking about stopping here on the way from a Las Vegas run one of these days. Finally did it this weekend.

Bonita Falls is a dramatic, beautiful waterfall. It's also highly accessible--a short 2 mile roundtrip after a short, ten minute drive from I-15.

That accessibility is a blessing and a curse. Unfortunately, a lot stupid people with no appreciation for nature or consideration for anyone other than themselves have spray painted rocks, logs, and cliffs with a wide variety of stupidity. 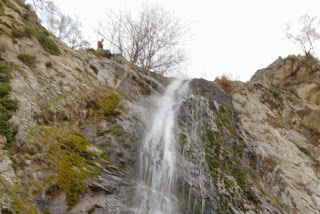 So if you can tune out the graffiti, and the often loud rowdies hollering at each other in the canyon, it's a nice place. Otherwise, it's not so nice. 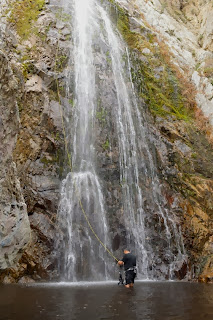 Detailed directions on how to get to the trailhead are included on the original post I linked.

Interestingly, some descriptions of this hike describe two "treacherous" stream crossings on this hike. In real-life, there's no need to make any significant stream crossings. Cross Lytle Creek at the bridge that heads into Green Mountain Ranch. (BTW, they apparently are a destination for mountainesque weddings). Don't actually enter Green Mountain Ranch, especially with your car. Instead, after crossing the bridge, bear right at the boundary fence, and stay outside the private inholding. 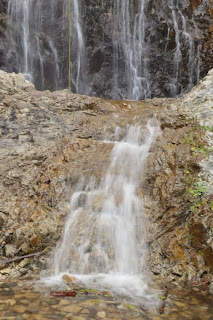 After the fence turns to the west, you should also turn to the west, heading up the boulder-strewn canyon bottom. This is a "tributary" to Lytle Creek, although, unless you're coming after a big rain or a major snow melt, the canyon is dry.

At the first reasonable trail on your left (about 1/2 after turning up the canyon), head up the incline. It's no more than 1/4 mile up the canyon to Bonita Falls. Most of the time, there's no water coming out of this canyon. It all seems below ground higher up the hill, and makes its way underground to Lytle Creek. No stream crossings are usually required to get to this waterfall, at least not until you're basically at the falls.

And it certainly is a big falls. For some perspective, note that the second picture on this post is a crop of the first picture. It's made larger so you can see the guy standing up near the edge of the falls. He's barely visible in the full-frame version. 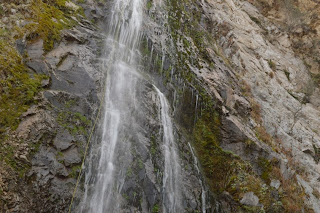 I've heard numbers on up to about 160 feet for this big falls. There are apparently several more large drops higher up that canyon, though they would appear inaccessible without technical climbing equipment. Certainly, I would not suggest trying to work your way around the falls.

Less than two miles for the day. Short hike, but a nice interruption to the long drive across the Mojave.
Posted by SkyHiker at 10:24 PM