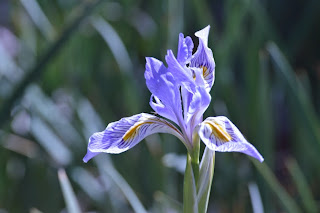 Hiked Thursday, June 26. This is one of many long-past hikes that I need to catch up on the blogging.

A number of years ago, I wandered up to the parking area near the top of Mt. Pinos and saw the most amazing sight: A field, covered in iris. That was in mid-July, four years ago. So I got to thinking that maybe it might be time for irises, again. So, the next change I got, I returned to Mt. Pinos. 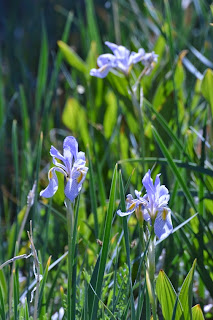 Directions to that trailhead are included here, in this older post of a hike to Mt. Pinos and Mt. Abel.

Feeling in much worse shape than when last I hiked this area, I was pretty sure I was only going to go to the Mt. Pinos viewpoint, and not continue on to Mt. Abel.

It's just about a 99 mile drive from my San Gabriel Valley home to the Nordic Ski Hut parking area on Mt. Pinos. Long drive, which usually means you want to have some time for a hike, or for after-hike activities. For me, that usually meant setting up a telescope and observing from the closest seriously dark-sky location to my home. 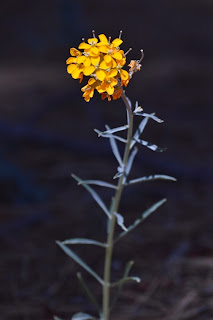 Besides the dark skies, what makes Mt. Pinos such a great location for doing astronomy is that it's on a paved surface, so the place doesn't get to dusty. Also, it's only about 30 minutes from the Interstate (I-5), so you can get there without much mountain driving. Also, there's a truck stop at the freeway, so you can stock up on food, drinks, or what ever.

The final thing that (usually) makes this a great location for night sky observing is the portapotties. No, that's not quite civilization, but it sure makes life easier when the toilets are just across the parking lot. Then you don't have to worry much about being figuratively in the middle of nowhere. 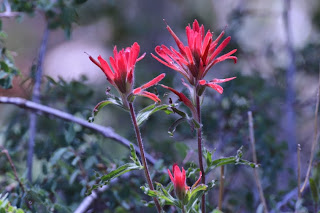 So I was a little surprised to discover that, on this trip, the porta-potties were nowhere to be found.

There are pit toilets not too far from the parking lot, but the point of having them in the parking lot is that this is where the telescopes are going to set up. Having to walk in the dark even a few hundred feet off the parking lot and to the camp area is a hassle, and one that seems crazy to me, given what a popular dark sky location Mt. Pinos is for the entire southern California astronomy community. 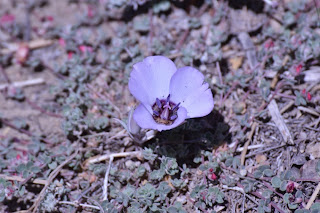 On the positive side, there were, at least, some iris blooming in the filed just north of the parking area.

It wasn't the dense field of blooms I saw four years ago, but there were a goodly number of individual blooms, all nicely formed and colorful.

In addition to the iris, western wallflower were common under various trees, both here and further along, when I got on the regular trail. 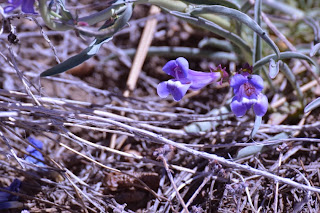 After finishing my walk around the meadow, I returned to the parking lot, then got on the regular trail to Mount Pinos. This trail starts at the southwest end of the lot. A sign pointing to the trail is visible as you exit the parking lot.

This "trail" is actually a dirt road. Apparently, it was paved not all that long ago, and you could just drive on over to the viewpoint that is at the end of this trail. Now, generally, the gate is locked, and it's a hiking trail. 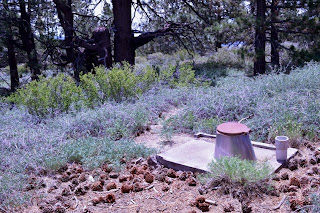 This makes it an easy trail to follow, as long as you keep in mind that your destination is generally to the west. You do *not* want to head immediately north, as that does not lead to Mount Pinos. You do not want to take any of the many turnoffs. Just stay on the main road as it trends to the west. 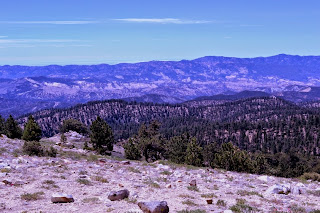 Along the way, flowers were blooming nicely. It wasn't rolling hills covered in flowers, but there were plenty of flowers. In particular, mariposa lily were very common, once I got about 1/2 mile away from the parking lot. There were also plenty of Indian paintbrush, and a fair amount of penstemon. Finally, there were some really tiny flowers that looked like lupine. Much larger lupine plants were in the area, but were either not in bloom or very pale in color. 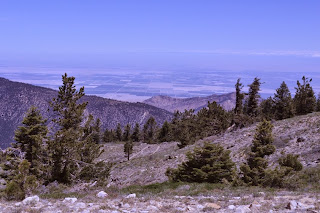 Interest-ingly, I did see some very purple lupine on the drive up, but none on the trail I walked.

At the end of this trail is an overview. If you're interested, the trail continues from the lookout towards the north, dropping into a valley, then continuing on to Mt. Abel. 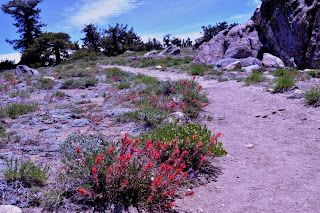 Oddly enough, if you were to head south from near the overlook, you'll come across a couple of pit toilets. The funny part is that one of them is just a metal seat, upon concrete. The surrounding wooden structure is completely gone.

The other outhouse still has three of its walls, but not the door. When I was there, a black cloth covered the top half of the door opening, which means it sorta covers the wrong half. But that's the way gravity works, right? 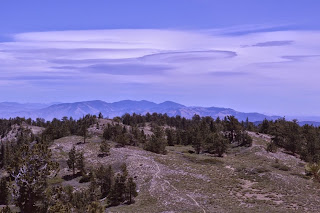 Since I haven't been hiking that much and didn't feel up for a longer hike, I just turned around at this overlook. Probably most day hikers turn around here, anyway.

On the way back, I took a detour to the solar panel / antenna array that's on top of the actual summit of Mount Pinos. 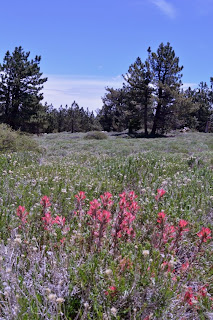 Mileage for the hike would be approximately 4.5 miles. I'm not sure how precise the mileage given on the sign is, but obviously it's in the ballpark. It's an easy, relatively short day hike with relatively minor altitude gain. So even with the high altitude, it's a pretty easy hike. The high altitude makes it cooler here than in surrounding areas, but it'll still get pretty warm in the summer.