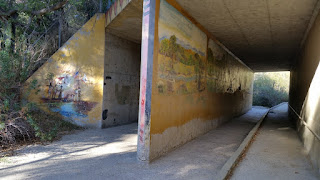 Hiked Saturday, September 26. This is my third trip here on one of these "County Fitness Challenge" trips. About 8 times a year (skipping the winter months), the County Department of Public Health sponsors these events at one of a number of different county parks. 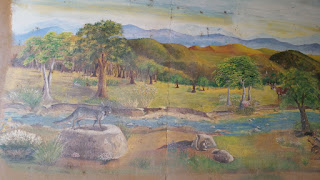 The goal is to increase the amount of activity engaged in by its employees, to improve their health and reduce health care costs. This means, for the events at the start of flu season, there are free flu vaccines. They also have various drawings (prizes contributed by the various health care organizations that provide health care to the County employees). 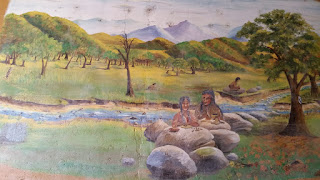 Well, I'm a big fan of "free," and, obviously, I love hiking. So when these event includes hiking, I'm almost always there. So this is the third time I've come to Placerita Canyon for one of these events. I've also visited numerous times on my own. 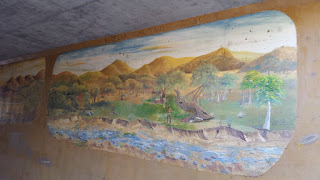 The Heritage trail is a short 1/4 mile or so each way, and takes you past a small cabin, and ends at the park boundary, just after "The Oak of the Golden Dream." It is said (but also contested) that this is the oak, beneath which gold was first discovered in California. There's a wooden fence around the oak here, plus some historical markers.

Meanwhile, the adjacent property owner, the Disney Corporation, claims there's another oak, on their property, that's the REAL Oak of the Golden Dream. Pretty impossible to prove, either way. 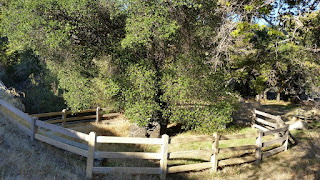 On the way to the Oak, the trail goes under Placerita Canyon Road. Under that tunnel are various murals that represent some of the historical changes that have occurred out here.

Next up for me was a walk up the Manzanita Mountain Trail. This one is supposed to be about 1.6 miles roundtrip. From the main trailhead, go straight, on the Hillside Trail. After 1/10th of a mile, there's a sign to make a sharp left turn, on to the Manzanita Mountain Trail. It's supposed to be .7 miles from here to the mountain top. I have to say it seemed a bit longer than that on the way up, but that's probably because it's REALLY steep in parts. 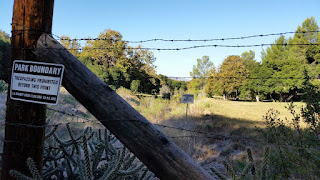 I don't think the mountain top is visible from the trailhead, as an intervening hilltop intercedes. 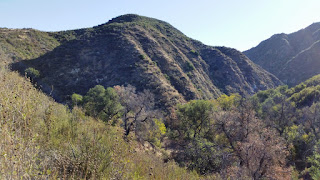 I then rushed back down, not wanting to miss the drawing. Didn't have to worry, as they did re-call the names at the second drawing, and, besides, I didn't win anything! 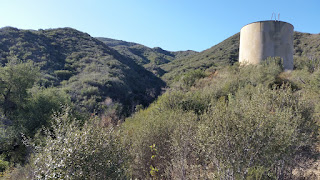 Following the drawing, I joined a short nature hike. But, after a few minutes of that, I eventually left on my own. It's odd the things that will bother me (or, I should say, I can be bothered by odd things?). In this case, the way the ranger (presumably--she kept talking about having a badge, but that may have been more for effect than for veracity) pronounced words like "symbiotic" (which she pronounced "symbionic") and "chaparral" (which she pronounced, "shapa-rel"), and the mis-identification of a small purple flower, that she called a cliff aster, which clearly wasn't. They were aster, but not cliff aster. 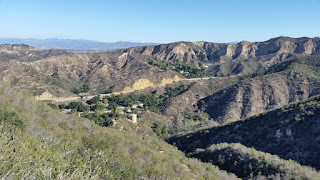 All small things that wouldn't normally bother me, and I know I often say something other than what I'm thinking (meaning I know the right word, place, number, or what ever, but my mouth says something else), but, for this and other reasons unrelated to the ranger/docent (the heat, the size of the group, the speed we were covering ground), the whole thing just didn't seem conducive to learning, so I walked off on my own. 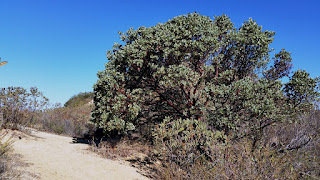 Walked the rest of the trail (given as .325 miles each way, but I don't know if they mean the loop is that long, or it's that far out and that far back, but I would suspect the former, because it seemed like well over 1/4 mile just to get to the turnaround point). Snapped a few shots. 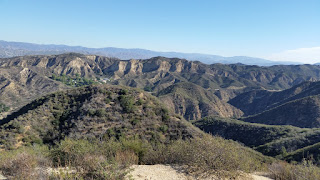 Then got back in time for the second drawing. Didn't win anything there, nor had I won anything on the previous drawing. Boo!

At this point, I decided to go home, because BYU was playing at Michigan, and this game was on ABC. Thought it might be a fun game to watch. Alas, once in the car, I learned Michigan was up, 31-0. Well, heck! If I knew it was going to be a blowout, I'd have stuck around for another short walk or two, then waited for the third drawing.

Anyway, between my three short walks, my several walks from my car to the park headquarters and back, and the walks through the visitor center and between the trails, I'm sure I made my three miles minimum. 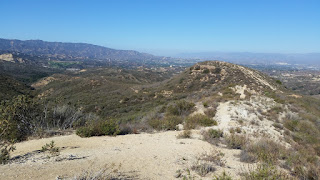 Placerita Canyon State Park is located off of CA-14. From the Los Angeles Basin, take I-5 north to CA-14. Placerita Canyon Road is only about 3 1/4 miles after getting on CA-14. 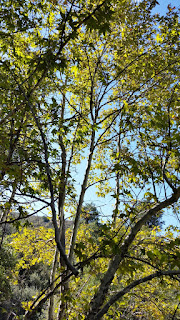 Well, it brings you to the "main" entrance for Placerita Canyon State Park. I guess there's another entrance about 1 1/2 miles further, at the Walker Ranch. I've never actually driven up to there, though clearly some people do. From the main entrance, it's a two mile walk on the Placerita Canyon trail to get to near the Walker Ranch, where the trail to the waterfall shoots off to the south.

There is no entry fee for this park. Dogs are permitted on a leash.

Nice park to visit, though it can get hot in the summer. Better in the spring or later in the fall.
Posted by SkyHiker at 4:02 PM