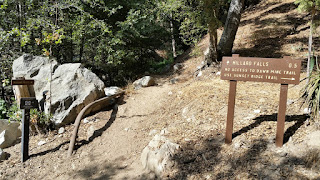 Hiked Sunday, October 2. Obviously, this hike was a long time ago. I began blogging it a while ago, but did not manage to finish. Then I managed to delete the post. It's the stupid touch pad, which often manages to highlight text as I type, then delete the text when my palm moves on the touchpad. I just adjusted the settings, so hopefully that won't happen any more. 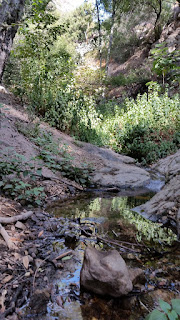 But the real reason for this long hiatus is that I had a bit of a health issue the past sex weeks. Serious diagnosis, followed by major surgery.

I'm mostly recovered, and now doing a lot of mall and park walking, but I have not tried anything seriously strenuous, or even anything taking me more than a mile or so from pavement. I may be trying slightly longer hikes, but I also know my recovery is not complete, and I may soon be taking some medications that will further sap my endurance. 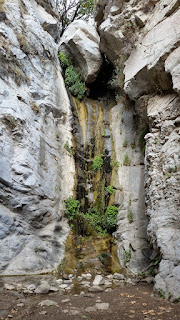 Nonetheless, I'm still alive, and, at least for now, feeling mostly okay. Can't be sure if I'm "cured," or if this is just a calm before the storm. I'm hoping the former, obviously.

In the meantime, this was the last hike I took before my surgery. I read the trail write-up in Modern Hiker, and, quite frankly, I was surprised. This trail was closed the winter after the 2009 Station Fire, which was right about when I was starting my first 100 hike years, so I never managed to see the falls before winter mud flows lead to a closure order for Millard Canyon falls. 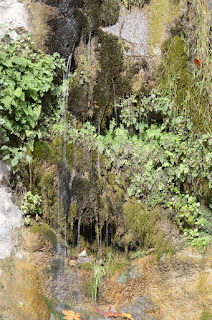 The falls themselves are also visible from the Sunset Ridge Trail, which heads out of the canyon and takes you right near the top of the falls. The best view of the falls on that trail is from some distance away, however. 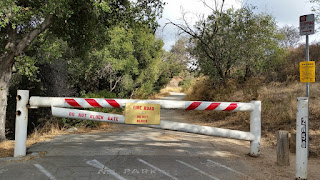 You can also get close to the top by taking the trail past the falls, then swinging back downstream (Hiked last year, but never blogged. Must do that, still!). But you can't really see the falls from the top very well, at all. 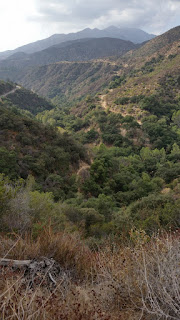 Modern hiker says it's 1.6 miles roundtrip, so that's a pretty short distance. Several stream crossings, which are not a problem when the water is so low. Quick walk, and the view was as expected, as was the low water flow.

Knowing ahead of time that this hike was going to be so short, I intended to then add the Sunset Ridge Trail. I intended to go all the way to Echo Mountain, but did not feel the strength or motivation to go the distance. I didn't even feel the motivation to head up from the canyon bottom. Instead, when I drove in, I noticed many parking spaces were right at the saddle, which would save me about 1.5 miles roundtrip, and a pretty significant climb. 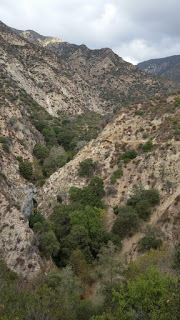 So after my visit to the falls, I drove my car back up to the saddle. Yet, even with the head start, by the time I got to the picnic area (about 1.5 miles from the saddle), I was feeling pretty tired. So I sat, took some pictures, then returned to my car. A pretty short day, yet enough for what I could handle, that day.

I'll probably be heading back there if we get some significant rain this year.
Posted by SkyHiker at 8:51 PM