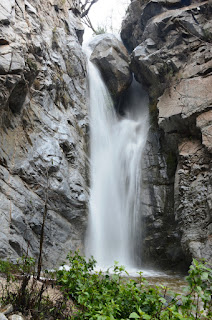 Hiked Friday, January 13. 1.2 miles. On my previous hike to this recently-reopened trail, the water flow was almost non-existent. However, a series of storms, including one that was probably still dropping some water higher up in the watershed, had changed things, dramatically. Once at the waterfall, there was no doubt that the trip had been worth it. In the waterfall's alcove, the water roared.

The two large boulders at the top of the falls makes the view from below unique--quite different from any of the other San Gabriel Mountain waterfalls I've visited. 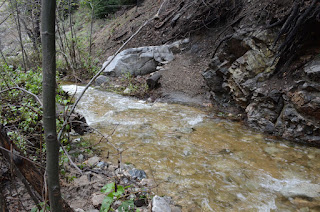 Getting there was a bit tricky. With the water high, you have two choices: Get wet early and often, and just walk through the water where the river is wide and slow, or pick a route that keeps your feet dry, but with the need for more careful route selection, and the exercise of balance and discretion. I chose the latter route. 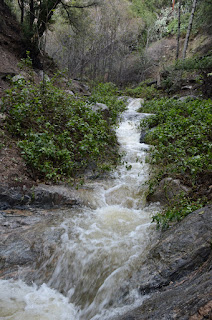 With my hiking boots, I have about five inches of leeway--I can stand in water that deep and my socks stay dry. Much higher, and the water flows into my boots, and the way becomes less pleasant. This did require some walking among the weeds, so my pants got pretty dirty. Also, because of one miscalculation, one of my socks got wet.

Three hikers were returning while I went out. I passed about the same number coming back. Relatively light visitation, probably because a lot of people don't know the trail's been reopened, yet. Or it may be people are too cheap to pay for a day pass. It's five dollars for a one day Adventure Pass, $30 for a one year pass, or $80 for an all-federal fee area annual pass to park here (at the end of Chaney Trail Road, in Altadena).

Just over one mile, roundtrip. After this, I headed over to Rubio Canyon, for part II of my day's hiking.
Posted by SkyHiker at 9:04 PM