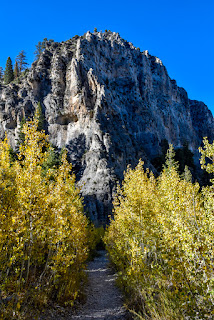 Two posts back, I put up a shot from Red Rock Canyon National Conservation Area. After a short afternoon of hiking (still to be blogged), I set up at the Pine Creek trailhead parking area, and took some shots of the Milky Way above the escarpment. I had to take a Thursday off from work to get here in time for that shot. But that meant I was in Las Vegas all day Friday. Well, that means hiking during a workday, which means going to places that are otherwise going to be a mess on the weekend. 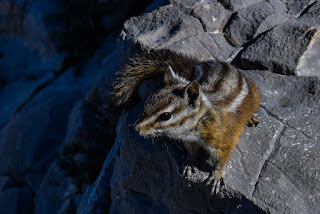 I decided the place that probably best fit the bill in early October would be "Mount Charleston," the name the locals use collectively to refer to the high altitude portions of what is officially the Spring Mountains National Recreation Area, in the Humboldt-Toiyabe National Forest. 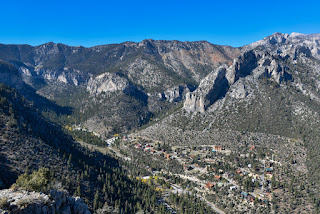 You may recall that I hiked up this area, last year. That was my first time up here in about seven years, long enough that, the previous time up, the freeway ended before Lee Canyon. This time up, I observed several traffic circles that must have been there last year, but which I didn't recall. One of the traffic circles was at a huge visitor center, which also wasn't there 7 years previously. 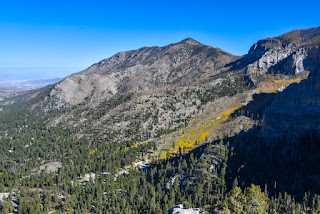 I took advantage of the huge visitor center to use the restroom (of course!), and ask the rangers there about good leaf viewing locations. She suggested the Bristlecone Loop as the one best trail to take, but also noted the area around the Echo Trailhead. So, I decided I'd start with the Bristlecone Loop, which I had hiked previously.

By the way, my photos are posted in reverse chronological order, so the first photos are from the end of the day, while the first shots are down at the bottom. 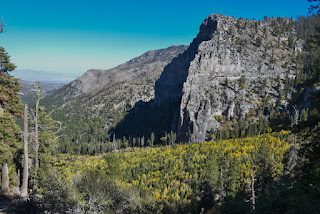 This trail is over at the top of the Lee Canyon Road, so I made my way over, and parked just above the resort entrance. Lots of parking, both before and after the resort entrance, though I'm sure it all fills up on busy summer and fall weekends.

Aspen leaves were nice, from around the ski area and on up. Probably one of the better immersions into aspen leaves was in that first mile or so. 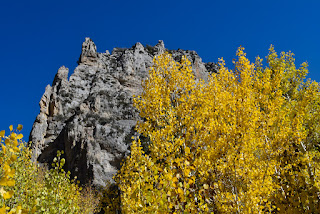 The trail then climbs out of the aspen, runs by a mix of bristlecone pine, both living and dead. Bit more climbing, then the trail turns on to a broad decommissioned road for the return leg. Nice views back across the canyon, with ribbons of color along creek paths. 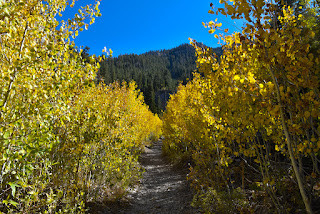 Some aspen, again, near the end of the trail. Then I had to walk from the lower trailhead parking lot, back up the highway, to where my car was parked. Kind of funny, that I walked right by it, because I thought I had parked further up than I had. Thought my car had been stolen for a few minutes. 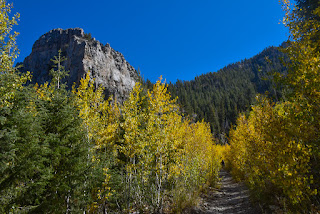 Once back at the car, I drove back over to Kyle Canyon, then up canyon, a bit, to the Echo Trail trailhead. The large yellow trees (aspen or cottonwood, no sure which) were at that trailhead. 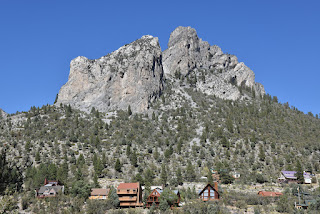 This trail heads southeast, parallel but above NV-157. It passed several additional access points. It also passed a trail labeled as "Little Falls." Apparently, several ways of getting there, too, as I passed one or two more opportunities to get there. 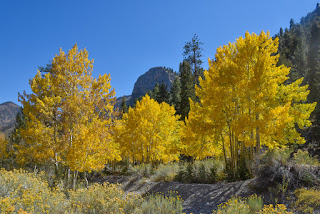 Eventually wound up on the Cathedral Rock trail. I didn't expect to see any more aspen this way, but figured I'd keep walking to see where it went. Looks like it passed several seasonal falls along the way. 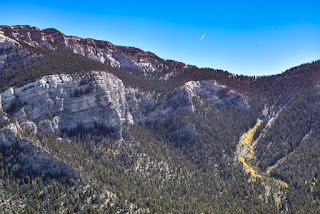 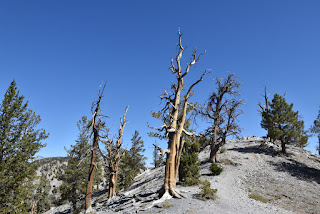 The rocky crags are really impressive in these mountains. 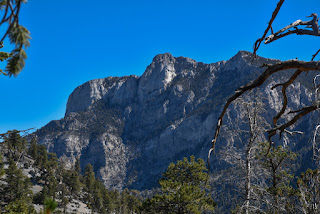 Nice view from the top. It kind of sneaks up on you. BTW, not far from the top, there's a trail split. There was a sign post at the junction, but no sign. I checked my Alltrails app. The left would have taken me to Little Falls, again. I stayed right. 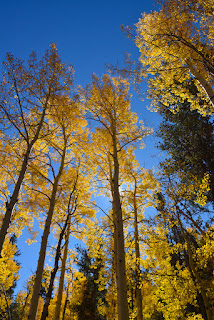 Probably only about ten minutes from there to the top. There was a picnic table, there. Several chipmunks, too. I broke down and fed a few of them a few unsalted nuts from my trailmix. 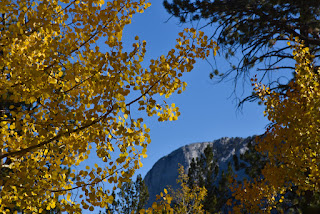 You could look down Kyle Canyon (towards the valley floor), across Kyle Canyon (to another one of those impressive crags, with homes, below), or up-canyon. 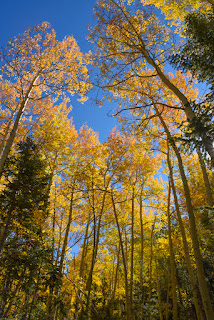 Easy walk back down to my car. So one moderate hike, and one short hike. Nice hikes. Nice leaves. Good fall hike.
Posted by SkyHiker at 2:17 PM