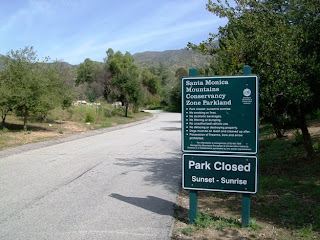 I bought some maps at the Mt. Baldy Visitor Center on Thursday. One had a trail marked as "Wilson Canyon trail," which went from the San Fernando Valley side of the San Gabriel Mountains (Wilson Canyon Park) over to the Antelope Valley side (Placerita Canyon Park). I had already read of several short hikes in Placerita Canyon. The idea of going "over the mountains" seemed like a good idea--a nice, long hike at relatively low altitude, perfect for a coolish winter day.

Wilson Canyon Park was not on my AAA map, but Olive View Hospital was. I drove the 210 Freeway to within a few miles of its intersection with the Golden State Freeway (I-5) and found Wilson Canyon Park. The entry is not exactly obvious--it looks like a small driveway just east of the hospital.


At the entry is an "iron ranger" for you to deposit a $5 parking charge, which goes to the Santa Monica Mountains Conservancy. Since there wasn't any actual staff at the gate, and I did see people walking down the road, I decided to drive to the end of the road to see what my $5 fee would get me. The answer was about 4/10ths of a mile--short enough that I was willing to park on the street and save the $5. It was about 10:30am.

Ten minutes of walking up a moderate incline and I was back at the end of the road. A trail headed up and to the left of where the road ended, so I headed that way. A short walk further and I came across a number of picnic benches. The trees above were mostly burned, indicating a forest fire swept through this area somewhat recently.

This area is crisscrossed with various use trails, and none of them seemed to be obviously "the" trail to take over the mountains. Finally, I came across a familiar-looking sign. It was the one the county uses to indicate trails. This one said "Los Pinetos Trail," and indicated it was a multiple user trail (hike, bike, or horse).

Well, since I already knew that there was a Los Pinetos Trail that ran through Placerita Canyon Park, and the Wilson Trial was supposed to be a multiple user trail, I thought maybe this was the trail I was looking for. The problem was, this sign had no directional indicator. It didn't point to where the trail should go. So I first went east from the sign, then west. Both directions started out as clear trails, but soon faded into obvlivion as they headed up canyons.

The only direction left was south. That didn't seem to make sense, since I wanted to go north. Nonetheless, with the other options eliminated, this was all that was left. Fortunately, I soon ran across a group of joggers, who confirmed that this trail would lead to a broad dirt road that headed through the mountains. And, indeed, aftter a few minutes of heading south, the trail arched to the east, and I passed a second "Los Pinetos Trail" sign. It was 11:30am. I continued uphill.

Heading up the hill and gaining altitude, I could then see what looked to be a trail heading directly north from Wilson Canyon on a ridge. However, I was not certain if that was an actual trail or a use trail, so, after some hesitation, I continued along what I eventually determined was "Wilson Canyon Road." 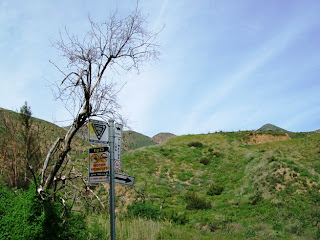 This road headed mostly west, rising slowly above the San Fernando Valley. The sky was hazy, but the view was still great. Wildflowers were blooming. In some places, the flowers carpeted entire areas. 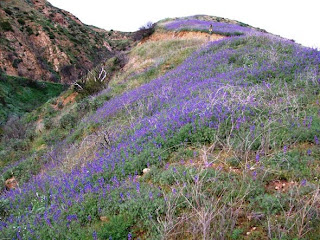 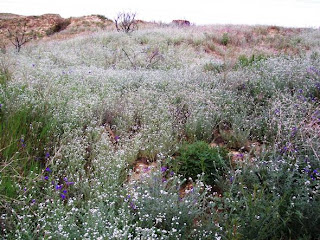 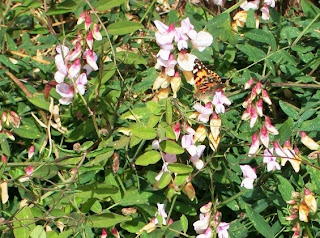 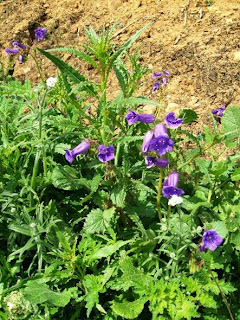 I also came across an interesting and mysterious sight--a stuffed bear, which appeared to be part of a shrine. The bear had a toy street car around its neck. There was also an apple near the bear, and a small glass container for candles.

Who or what was this shrine for? Was something buried under these rocks? I don't know. 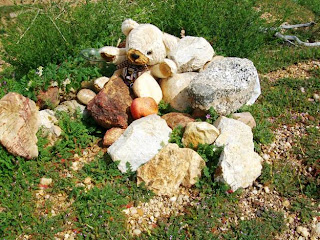 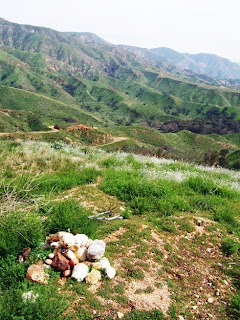 It was 1:30pm before I reached Wilson Saddle. Two hours of walking, even at a modest pace and stopping for pictures tells me the road must be at least four miles long, so it's probably 4.5 to 4.75 miles from the streets of Sylmar to Wilson Saddle.

Immediately north of the saddle, Los Pinetos Trail/Placerita Canyon Trail runs through a thick oak forest. The canopy above is thick and picturesque. 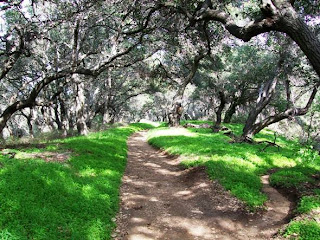 Because it's a trail rather than a road, the northern part of the trail seems steeper than the southern part. Indeed, it is indicated as just 2.4 miles from the saddle to Walker Ranch in Placerita Canyon Park. I stopped at the "campground" area where Los Pinetos Trail intersects with the Canyon Trail to eat lunch. After lunch, I embarked on the Waterfall trail. It was 2:45pm.

Short walk, and smelly. There's a strong sulfur smell here, which is apparently due to a high oil table. It's a nice waterfall. Seasonal, so go in the winter or spring if you want to see it. 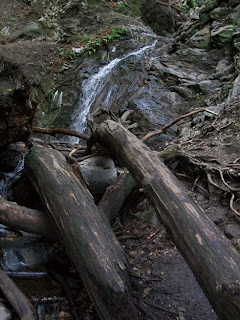 Made it to the waterfall and back to the Canyon Trail in about 30 minutes. About an hour more to the saddle.

Tried to take a shortcut once I got near the bottom. I though one of the Los Pinetos trail access points further west of where I parked would get me to the car quicker. I was wrong. But I did learn that there are at least three signed Los Pinetos Trail access points along this section of Olive View Drive. Several are paradoxically both signed as an access point and signed as a flood control district "No Trespassing/No Loitering signs." My suspicion is that the most direct access from Olive View Drive to the trail is the one that runs near a concrete wash that passes under Olive View adjacent to the hospital's employee parking lot G.
Posted by SkyHiker at 11:05 PM