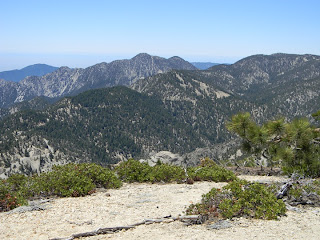 (View from summit, looking west). Hiked Sunday, July 17. I actually had another hike planned, but it appears the road to Buckhorn Camp is closed, and I was not sure if I could walk in. Probably could have, but it wasn't signed so I figured on passing for today. Might try accessing Cooper Canyon Falls from the Eagle's Roost picnic area next. Definitely running out of hiking opportunities, so it will have to be soon. 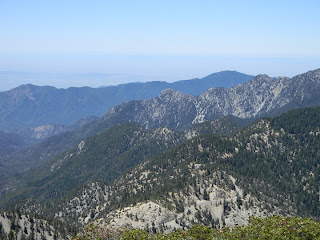 (View from summit, looking southwest). After passing on Buckhorn, I was thinking maybe Mt. Williamson. Nice hike because I figured I could not miss the trailhead. It's right where the old CA-39 intersected with the Angeles Crest Highway. 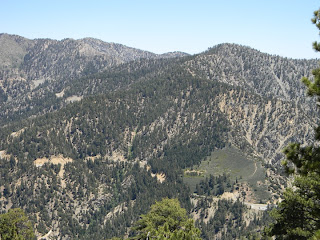 To get to the trailhead, take the 210 Freeway to the Angeles Crest Highway exit and head right (north). I did not precisely measure the distance, but I think the mileage markers were in the 50s by the time I got there. Figure on roughly 60 minutes of driving once you leave the freeway, and have a highway map to mark your progress.

Incidentally, there were two spots where the highway is one-lane, with a traffic light. 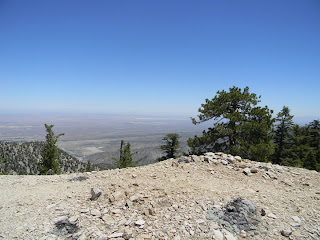 (View from summit, looking towards Mojave Desert). Pulled into the lot (on the left side of the road, opposite the CA-39 stub that intersects with the ACH), hung my Adventure Pass, and studied the map. I was a little confused, because there are two trails heading out of the northwest side of this lot. On the map, the one on the left is labeled as the Pacific Crest Trail, and you would follow that for 1.6 miles (according to my Tom Harrison map) before the trail to Mt. Williamson splits off, to your right. Meanwhile, the right trail on my map was labeled as being the South Fork trail, which heads down towards the Mojave Desert 5.2 miles to South Fork Camp. From there, it would be 2.2 miles further to Devil's Chair, in Devil's Punchbown County Park. 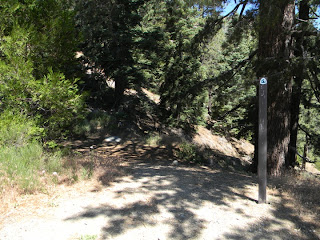 However, on the ground, there are currently (July 17, 2011) no mileage, destina-tion, or trail name signs on either of these two trails at Islip Saddle. What's more, the right trail (South Fork Trail) currently has several PCT shields at the trailhead, indicating THAT is the PCT (pictured above). Thing is, this detour is no longer the "official" PCT route. With the exception a a very brief detour near Mt. Pacifico, the PCT has returned to its former route through the Angeles National Forest. Of course, most through-hikers probably already know this, but I can still imagine a number of hikers taking an unnecessary detour as a result of this, and many day hikers wanting to go to Mt. Williamson being misled by the shields. 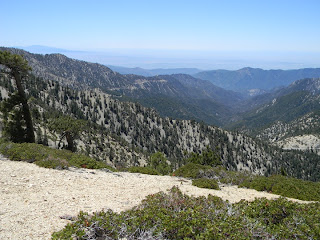 (View from summit, looking south). Quite a lot of prologue, but I think it's important to let you know that, while your map may accurately show you as taking the PCT towards Mt. Williamson, the shields on the ground will suggest the PCT is actually heading someplace else. 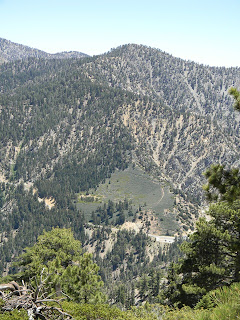 Once on the "real" PCT, heading north from the ACH, the path is pretty steep. As you begin your climb (and for much of the first 1.6 miles of this hike), you can look back towards your car, and see Mt. Islip, rising directly to your south. Incidentally, from Islip Saddle, had you crossed the highway and started up the trail on that side, you could have gone up to Windy Gap, then on to Mt. Islip or any of the peaks surrounding Crystal Lake.

However, today, I was heading towards Mt. Williamson. Starting at 6670, you're at 7900 feet above sea level just 1.6 miles later, when you're supposed to leave the PCT and take a spur trail to the right (north), to Mt. Williamson.

This spur is unsigned, however, so it could be easy to miss. The good news is that it is at a crest, so when your trail is not longer climbing (and, again, as of July 17, 2011, there are small PCT shield decals on plastic stakes facing either side as the ridgeline intersects the PCT here), it's time to make your right turn and pick your way through the manzanita bushes on your way to Mt. Williamson. 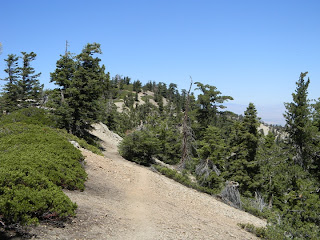 (Approach to Mt. Williamson summit). Several paths of equally apparent-correctness make their way up the steepest portion of the climb to the higher ridge line. From there, you trend northwardly 1/2 mile to the unmarked summit of Mt. Williamson. There are several false summits (meaning, "slight bumps in the ridge line) along the way. Near as I can tell, the "official" summit should be the last one, before the trail drops noticeably downward, and with a pretty open view in most directions. Some sections of this final run take a bit of care to negotiate.

Mt. Williamson, at 8214, is a bit under 1,600 feet above the trail head altitude. Good views in most directions, although other tall peaks in the San Gabriel "high country" partially obstruct some directions. For example, in the picture at the top of this post, only a sliver of the ridge line that includes Mt. Wilson is visible between a break in the foreground mountains. 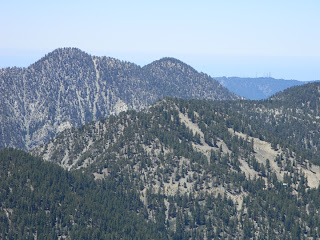 This picture here is a close-up view through that notch. It's close enough that you can make out the antenna and observatory domes. 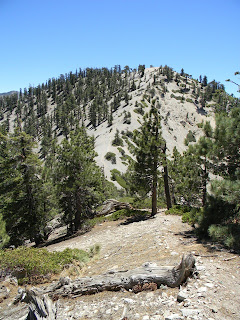 Once at the summit, I noticed a clear use trail making its way down this summit and up the next (lower) rise. With a bit of time, I decided to head down this steep and gravelly section, losing about two hundred feet elevation, in the process. Then I headed back up the next rise (another 100 feet or so altitude gain). There actually isn't much of a peak to this next rise, and I continued from the crest an additional 200 yards or so. From there, I could see the trail continuing down, then back up over NEXT little rise. But, with time running short (I needed to get my car started down the mountain by 3pm), I had to turn around then. Back along the flat portion, then down the 100 feet I just gained, then back up the north face of Mt. Williamson. The picture above was on my way back, looking at that north face. 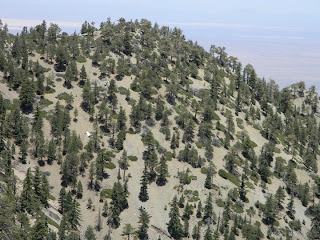 On my return back up the north face of Mt. Williamson, I looked back and saw several large, and numerous small, metallic objects reflecting the sun back at me from the ravine to my north. Those are the remains of a plane crash from back in the 1960s. The pieces were more visible in real-life than they appear in this picture. In the picture, the largest piece (about 1/3 from the left, near center) appears as a white rock rather than the metallic reflection it actually was. The smaller pieces are nearly invisible in this shot, but are scattered below and to the right of the large piece.

An extremely faint use trail also makes its way to those remains, but I chose to let the dead rest in peace.
Posted by SkyHiker at 1:04 PM